The indignities of life add up, sometimes more than you can take. But our protagonist is fine thanks.
READ REVIEW
Next Previous 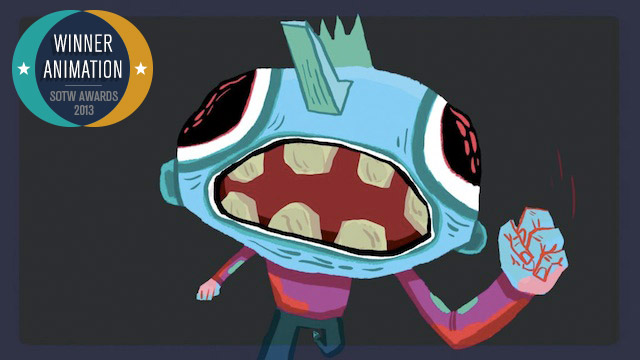 The Royal College of Art is one of the gems of the international animation scene due to its ability produce talent that is technically proficient, but also preternaturally mature in their artistic voice. The last couple of years have given us the distinct and uncanny work of Mikey Please, Julia Pott and Dave Prosser, films that excelled at festivals worldwide, then found an even larger audience online. Now add Eamonn O’Neill to that list.

I’m Fine Thanks is a graduate work from RCA, but not Eamonn’s Grad Film. That would be Left, which is currently just hitting festivals now. So, speaking of preternatural, while some students are still doing exercises, Eamonn was crafting a short that would win the top student honor at Ottawa 2011. The film, like another Ottawa winner from that year, yesterday’s review Moxie, deals with a damaged individual, one whose frustration and pain spill out into extreme action.

Viewed in vignettes, we follow a young man through life who just doesn’t have much going for him. He’s small in stature, not particularly quick-witted, and relatively ignored by the girl he desires. When, years later, he receives a Facebook friend request from this girl with whom he has a love-hate relationship, his composure begins to crack.

O’Neill’s clean, but surreal landscapes and character design provide a good field for the character’s evolution from downtrodden push-over to angry maniac, as the controlled motions and enviroments contrast with chaotic visual elements that metaphorically exhibit his inner turmoil and frustration. While not revolutionary in narrative (can one be in 5 minutes?) the film is crafted carefully, as the representative vignettes are well chosen in order to pass the story along as succinctly as possible. Visually is where it shines–as the look is very fresh, a pleasing mix of good design and brilliant color.

Eamonn, like many grads of RCA, has good prospects now that he is out of school. Last month he joined Studio AKA, one of the standout animation production companies in the UK which will represent him for commercial work. In the meantime, Left debuts today on the festival circuit, so please keep an eye out for that.