Finally, a musical where everybody dies.
READ REVIEW
Next Previous 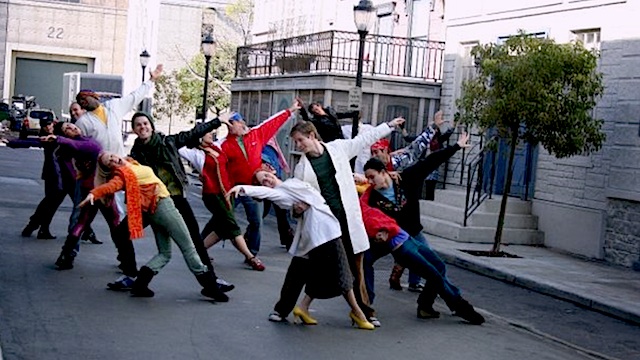 Considering I’m an unabashed fan of musical theater, I feel comfortable in saying that for all intents and purposes it’s a hugely ridiculous art form.  After all, it’s high drama told through song, dance, and spirit fingers. Take away the artifice of the stage and things start to get really absurd—an inherently comedic milieu where onscreen actors in real world settings emote through melody and complicated choreography. With his USC thesis film Sudden Death!, filmmaker Adam Hall capitalizes on this innate comedy, crafting a 19 minute short that is simultaneously a love letter to musicals as well as a good natured roast of the genre’s well-traveled tropes.  There’s song! There’s dance! There’s brutal death in the key of E!

In what is perhaps the most cheerful contagion film of all time, Sudden Death! revolves around a mysterious virus that has overtaken the city of Los Angeles, causing its victims certain death.   Their only symptom? Breaking into spontaneous song and dance.  Hall and his crew certainly don’t shy away from the film’s goofy premise, constantly winking at the audience with a slew of in-jokes and fourth wall destruction.  It’s apparent that everyone involved with the production loves musical theater just as much as they enjoy making fun of it. And, so the genre jabs come from the best, most honest possible place—the perspective of a true fan.

Hall managed to recruit some impressive talent for the film, including Hellboy’s Doug Jones and Legally Blonde reality show alum and Felicia Day doppelganger, Autumn Hurlbert.   All the film’s performances are gloriously over the top, each actor hamming up an array of contemporary musical theater clichés for comedic effect.  The dance numbers retain a similar feel.  As synchronized choreography takes places, it’s hard not to marvel at the cheery polish that Hall and company have applied to their apocalyptic premise.  Viral epidemics have never been so much fun.

But, all of this would be a moot point if the music wasn’t good.  Fortunately, it is. Sudden Death! is filled with catchy melodies and lyrics that would feel right at home in a sequel to Dr. Horrible’s Sing-Along Blog.  Kenny Wood, composer on the Oscar nominated short Oktapodi, and musician/lyricist Kahle McCann are responsible for the toe tapping numbers, and both do an excellent job arranging songs that are as cute as they are memorable.

If Sudden Death! falters, it does so with its runtime.  Considering the film’s “it’s-all-a-big-joke” sensibility, things begin to drag slightly in the final few minutes.  After all, if the characters aren’t taking the events on hand seriously, why should we?  But, it’s an easy criticism to overlook when taking into account the considerable amount of effort that went into producing a short musical on this scale with such impressive production values—it’s certainly not a surprise that the film has played at a slew of major film festivals over the past year.  Even if you aren’t a fan of showtunes, give this one a shot—Sudden Death! may just find a way to charm, cajole, and jazzhand its way straight into your heart.