One astronaut's journey through space and life ends on a hostile exosolar planet. Grounded is a metaphorical account of the experience, inviting unique interpretation and reflection by the viewer.
READ REVIEW
Next Previous 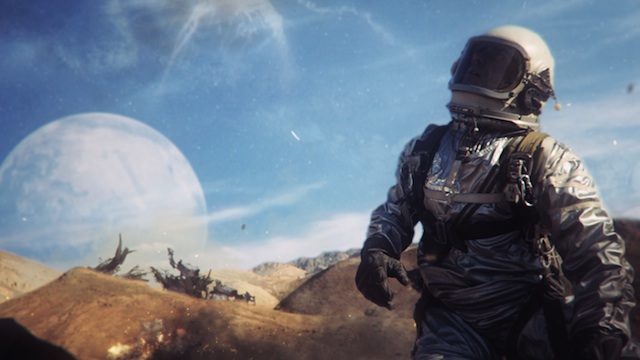 A flashy sci-fi VFX piece. We’ve seen ton of these before online, and, since they tend to do well and secure their creators major Hollywood opportunities, I’m sure we’ll see many, many more. Kevin Margo has the impeccable credentials to produce one: he is CG/VFX Supervisor at Blur Studio, and recently oversaw several sequences in the new Spiderman movie. And yet, despite Margo’s immersement in a world of visual gloss, Grounded aspires to much more. While we complain that these VFX pieces are too often vacuous—digital calling cards really—any complaints with Grounded must concede that it is too full. Too full of ideas, of meaning. Yes, this creates an indeterminacy that can often be the opposite of meaning, but Grounded is a sumptuous bit of eye candy with the soul of a Criterion classic.

An astronaut falls to his death on a planet. But, like Groundhog Day, the scene keeps repeating itself. It is the same astronaut, but the bodies pile up. The description attempts to give guidance as Margo writes: “Themes of aging, inheritance, paternal approval, cyclic trajectories, and behaviors passed on through generations are explored against an ethereal backdrop.” The material is there to decipher all these themes in the piece, but, rather surprisingly, the film does not force you into any of them. Truly, Grounded is an experimental film cloaked in the trappings of narrative, a piece much more akin to Solipsist, than The Raven.

How did such an odd film come to be? Feeling somewhat stultified by his commercial work, Margo yearned to channel his love of mainstream, yet avant garde, filmmakers like Lynch, Kubrick, Mallick and P.T. Anderson in his work. For him, the dawn of the DLSR era was revelatory, and he eagerly snatched up a Canon 5d Mark ii. Compared to the painstaking process of animation, Margo found the ease and autonomy in which he was able to create beautiful images revelatory, and the seeds of Grounded were born. Thematically, he writes that dark personal introspection in the wake of his father’s death (for whom the film is dedicated) and failed relationships, birthed the concept of cycles which is manifested in the film.

Two weekends of shooting and 80 painstaking VFX shots later, Grounded was complete. After a healthy festival run, we’re now happy to help introduce it to the web, where I am very curious how such ambitious, but admittedly difficult short will be received. Short Film, we long have contended, is a realm for experimentation, and the pairing of such engaging visuals with this degree of philosophical ambitions is certainly novel. Let us know what you make of it.