A disabled man named Agustin in Honduras has been building a helicopter in his home for the past 53 years causing controversy amongst his family and community.
READ REVIEW
Next Previous 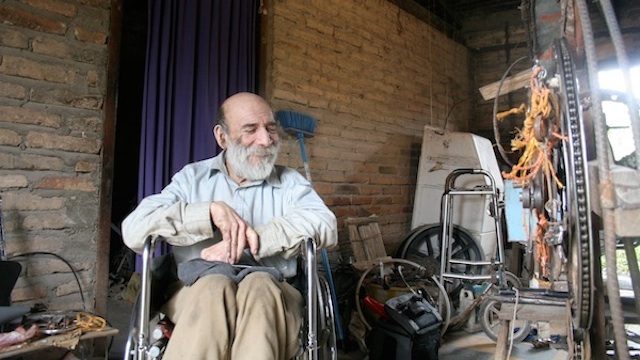 Documentary is a tricky thing to curate because there is isn’t the same kind of minimum aesthetic value to judge a film by. Story is paramount at SotW, but when viewing narrative and animation pieces the the amount of thought, effort and skill put into the crafting of beautiful images is a valuable shorthand for how much thought, effort and skill are put into the storytelling. When you watch as many films as we do, these biases are valuable filters, saving time, energy and, ultimately, sanity.

But because documentary is so dependent on its subject — a terrific topic or character can elevate even a bland production — these filters are not as frequently applicable. Take this film, Everything is Incredible. Not to disparage the film’s team, who have told a great story with wonderful warmth and a strong narrative thrust, but compared to the formalist pizazz of something like Always a Fire, it is rather pedestrian. Images have inconsistent lighting, there isn’t a ton of interesting cutaways and most of the story is told through talking heads. These are usually warning signs of a mediocre film. Everything is Incredible isn’t a mediocre film though, indeed it is umm…well, an incredible film. Because, at its heart lies an incredible subject, with an incredible story.

I wouldn’t have even discovered the film if Chris Jobson, curator of the excellent art blog It’s Colossal, hadn’t asked me to help him find it on Twitter yesterday. Through his strong recommendation I overcame my stylistic biases thankfully.  The description tells the gist of things; Agustin, who suffered a nasty bout of polio as a child, is confined to a wheelchair. Despite extreme poverty he is possessed by a crazy dream to build a helicopter. He starts in 1958, and builds the components, by hand, out of trash and the limited materials available to him. Through interviews with Agustin and the local community a picture grows of a strange, lonely man who nonetheless possesses a remarkable nobility. The community is torn, many do not understand the quest, and are unsure of Agustin’s mental state. They worry about how completely he has thrown himself into the project which is now 50 years underway, and fear his disappointment and pain should he ever realize it won’t fly.

It is a fascinating, and nuanced piece that wisely resists taking a purely celebratory angle on Agustin, but instead allows you to decide for yourself  how to feel about the aging eccentric. Certainly it is worth your 10 minutes of time, but permit me to pull out what I think is the critical line. It comes from Agustin himself midway through the film when he talks about his brother, who he terms “an alcoholic and died without reason”. Agustin’s brother would drink himself into a stupor and shout through the streets declaring, “I’m not the crazy one, I’m the drunk! He’s the the crazy one, he’s trying to build a helicopter out of sticks and fly it!”

This parable to me seems especially profound. His brother’s self-destructiveness, wouldn’t that energy be put better to use towards a task? Wouldn’t dark thoughts, be better kept at bay, through thoughtful intense work and study? To live with out dreams, to exist without the pursuit of excellence and craft, isn’t THAT maybe what’s crazy?