Chad Jones, athletic superstar and NFL hopeful, was brutally injured in a 2010 car crash. His journey to recovery is documented is this virtuosic short from the team at Union HZ.
READ REVIEW
Next Previous 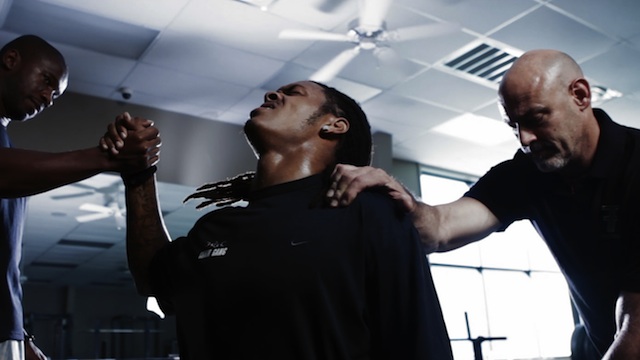 There’s no doubt about it. Always A Fire, the new inspirational documentary about injured football player Chad Jones is slick. Damn slick. It’s the kind of short film that is so well produced, so beautifully shot, so strikingly edited, that when watching it you almost lose yourself in the craft–the visual mastery on display. But, luckily, before you can fall into that hidden pit–the “style-over-substance” chasm that plagues so many lesser works–directors Nathan Caswell and Jeremiah Zagar pull you back into reality, reminding you that even though their film has gloss, they, above all, have an amazing story to tell.

Chad Jones was a heralded athlete at LSU–a pitcher with a fireball for an arm, a phenom on the football field. He was the epitome of the phrase “promising young superstar.”  Then, in the early morning hours of July 25th, 2010, disaster struck. A freak car accident left him badly injured, his leg brutally lacerated, his professional dreams swatted down in a dark instant.

The sports documentary is certainly well-traveled ground. So, is Always A Fire‘s general narrative–injured sportstar makes a remarkable bid for recovery. But, if this sort of doc is familiar, the team at Union HZ–a collective powerhouse of creative talent out of Brooklyn–are hell-bent on evolving the genre.  Eschewed are the languid b-roll shots, cheesy music, and stagey reenactments of old. In it’s place? A veritable smorgasbord of visual punch–from extreme close-ups, to archival footage, to computer generated motion graphics.  Here, everything is stylish, but more importantly, it all also feels purposeful. In six minutes we are given a full portrait of an amazing individual, as powerful, driving, and fast-paced as the sport in which he excels.

And, really, that’s what’s so impressive about Always A Fire. Some films have style, others substance. Always A Fire marries the two in an indelible combination of imagery, music, and heart.  As the soundtrack begins to build, leading to the film’s climax, it’s impossible not to get swept up in the sheer artistry of it all.  We watch as Chad Jones–the collegiate athletic savant–learns just how to be a genius again. And, in his journey, we rediscover that delightful three word phrase that so many sports movies have advocated again and again:  Never give up.