Everyone writes to Erica Wexler on her Facebook, and she's great about responding. But Erica Wexler is dead.
READ REVIEW
Next Previous 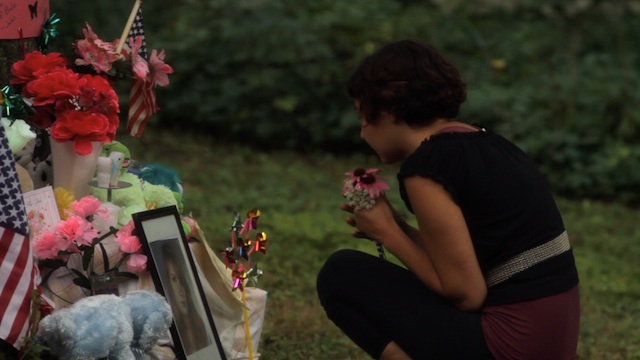 Zombie movies and mockumentaries–two sub genres that are incredibly overplayed in the world of shorts. But, it seems, that every once in awhile a film comes along with the sole purpose of proving my blanket statement wrong. For the flesh eating folk, be sure to check out the recently featured Play Dead. As for mockumentaries, I turn you to Erica Wexler is Online, a faux-documentary meditation on posthumous social networking.

You see, Erica Wexler is your average college student/avid social networker. The one hitch? She’s dead. Doron Hagay’s darkly comedic short features a community dealing with the consequences of a dead girl who can Facebook from the beyond the grave. It’s a great premise to be sure, but Hagay’s film succeeds where so many others fail because of it’s slightly understated tone.  Mockumentaries often fall victim to a certain showy, “look-at-me-aren’t-I-clever,” winking at the camera style that’s about as subtle as an after school special. Here, everything is played with a lot more nuance–from the steady pacing to the simple text call-outs displaying Erica Wexler’s messages. It also helps that the acting is quite good. Too often films such as this feature performances that are ostentatious or stilted in their attempt to be “real.” Not the case here, as every interviewee is perfectly cast and shot simply over smartly chosen backdrops.

Most intriguing of all, however, is what the short  is trying to say. In the film, no one seems all that shocked that they are digitally communicating with a dead person.  This apathy–this blasé treatment of that which is seemingly incredible–is intrinsically linked to the nature of social networking itself.  If there’s a criticism of today’s connected culture, it’s that nothing is cool enough to impress us anymore. The internet, social networking specifically, has it made it possible for us to see amazing, unimaginable things at literally every second of the day. But, really, are we ever impressed anymore? It’s the age old sentiment of disaffected youth, except now we express our indifference as a global network of millions. This notion is represented by the film’s characters, who shrug blandly when talking about what should be astounding. As for their correspondence with the very dead Erica Wexler, that too is  equally innocuous: “Should I cut side bangs?” one girl asks.  And, so, in her messages, Erica informs people about their own lives–about their own futures.  Even when speaking to a ghost, people would rather talk about themselves.

And, really, isn’t that what social networking is? A narcissistic, high-tech popularity contest? Sure, we’re connecting with people all over the globe in a feel-good kumbaya, but what are the interactions that get us the most excited? It’s when people respond to the stuff we post, tweet, status update, instagram, etc.  We love it when people “like” what we “like”–when they notice what we notice.  In Erica Wexler is Online director Doron Hagey seems to say that even in death, that mindset doesn’t change.