It's Dogs vs. Zombies, in this light-hearted horror film from Miami collective Borscht Corp.
READ REVIEW
Next Previous 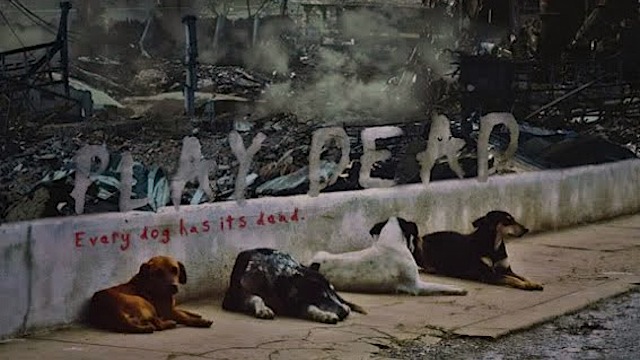 Horror about The End in Live-Action
Directed By Andres Meza-Valdes & Diego Meza-Valdes
Produced By Borscht Corp.
Made In USA

A slick and stylish comedy-horror flick, Play Dead bills itself as the “unauthorized sequel to Homeward Bound“. Following a ragtag group of doggie survivors through zombie end times, the film is a fun and unique take on the overplayed zombie genre, combining the irreverence of Ruben Fleicher’s Zombieland with an auteur streak more befitting of Tarantino.

That the film is having fun with itself is apparent early on. Introducing our canine protagonists, a corny freeze-frame technique is utilized, complete with text bio, and presenting us with dogs named, “Robocop” and “Princess”.  Scares aren’t the motivation here clearly. The filmmakers though, Andres and Diego Meza Valdes, clearly have a lot of fun with the blood and violence of the premise, including a few scenes of classic, entrail-spilling dismemberment and zombie headshots.

The plot can be a bit meandering, and despite excellent acting from the dogs, their character arcs feel underdeveloped. What makes up for this weakness is the abundance of style the filmmakers bring to bear, specifically with their use of music. A collaboration with musical artists Rachel Goodrich and Amigo the Devil, music is used liberally in the film for dramatic effect, reminding one of the front and center placement of contemporary rock and pop in the works of newer iconic American filmmakers like Tarantino, Wes Anderson or Sofia Coppola.

A clever premise, with a loose, playful execution that is still remarkably polished, Play Dead is the web’s answer to popcorn summer fare. And really, can you resist checking out these lovable pooches?