A strange creature races against time to make the most important and beautiful creation of his life.
READ REVIEW
Next Previous 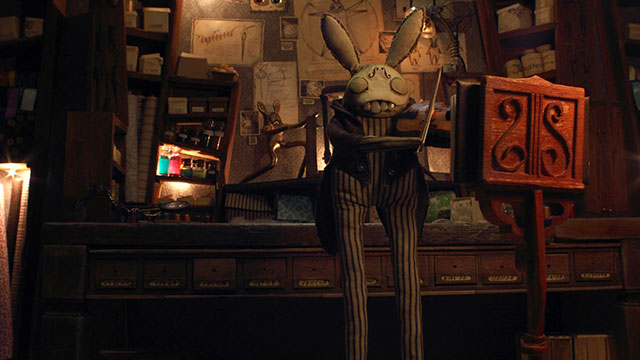 Stop-motion, one of the oldest and most basic forms of filmmaking, has somehow continued to captivate us for over 100 years. It’s magical ability to bring the everyday world to life with realistic detail just hasn’t been matched by 3D animation. Kirsten Lepore, Mikey Please, and Max Winston, are some who make up the avant garde of today’s stop-motion storytellers. But few have combined iconic production and character design with strong, original short stories as Christopher Kezelos. You’ve seen his work here before—the math-based Zero. His latest film, The Maker, has spent the past year lighting up the festival circuit.

The Maker explores the preciousness of our moments on earth, the short time we have with loved ones and the enjoyment of one’s life’s work and purpose.—Christopher Kezelos

The meticulous attention to details in production design make each shot a beautiful still. The film is so tightly put together that it’s a bit of shock to learn it’s the outcome of an internet-enabled collaboration across three continents. A production crew in Australia, a puppet designer in Ohio (Amanda Louise Spayd), and post-production in London.

Today marks The Maker’s debut to the world as part of The Wrap’s Short List Film Festival alongside 11 other great shorts. If you love the film as much as we do, head over now and give it your vote—we have.

Vote for “The Maker” on The Wrap