Born into a world of numbers, an oppressed zero discovers that through determination, courage, and love, nothing can be truly something.
READ REVIEW
Next Previous 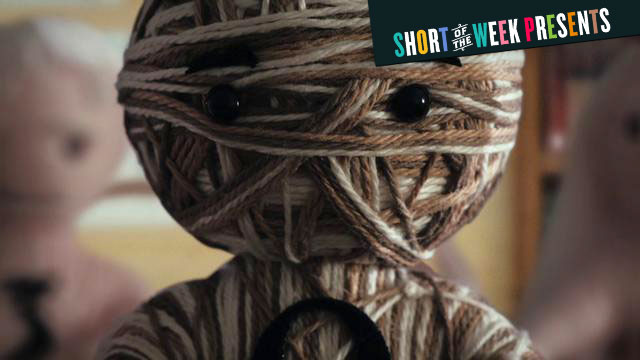 This week’s featured film pick is a much-awarded stop-motion from Australia that I caught on the festival circuit in 2010. Mixing hand-made models with blue-screen backgrounds, it is one of the loveliest animation worlds I’ve encountered, completely enveloping you in its fictional setting.

Following the trials and travails of yarn puppets, our titular character is a zero. This is a world in which from birth your capabilities and destiny are determined for you, predicated by a number stridently displayed on your chest representing all that you are or can be. 9’s are the elites of the this world, and the lowest you can sink, the “untouchables”, are cursed as Zero. For our hero it is a life of disappointment and abuse, until he meets a fellow zero, and comes to know something that supersedes this structured world’s plans for him—Love.

Zero is a deliberately paced film, rare for an animation, but which serves it well. The loneliness and heart-ache of our character is given time to establish itself, as each slight is given an extra beat in which to sink in, giving needed help in selling character emotional states—these being the most problematic part of the character design due to the low level of articulation for the faces. This extra time is of no harm to the viewer either, they are additional moments in which to sink into the the beautifully realized environments.

The debt that director Christopher Kezelos owes to the famous short film, 9 is apparent, though less consequential than you might imagine. While both dealing with anthropomorphic dolls decorated by numbers, the charm of stop-motion vs. 9′s CG clearly differentiates the films in look. And tonally it is a much different film as well, trading the post-apocalyptic dread of 9 for, yes, a Brave New World-style dystopia, however one in which the mood retains a more innocent sense of fable or fairy tale.

The film did very well on the festival circuit, winning top prize at influential locations such as the Rhode Island International Film Fest and LA Shortsfest, and at my screening there were members of the audience profoundly moved by the message of hope and perseverance it contained. Not me though. Nope, way too jaded and cynical for that too work on me…;). Anyways, there is plenty to like outside of uplift, though I’m sure the warm reception the film gained at festivals was very gratifying for Chris and his wife Christine, producer of the film. 2 years went into its creation and the care and detail of the film are brought in great focus through the behind the scenes video available online. It is astonishing to behold, and hopefully Zero receives an equally warm welcome from internet audiences now that it has come online.