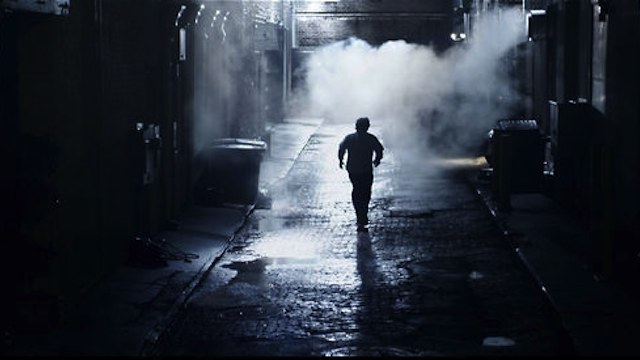 A few seconds into Colin Levy’s The Secret Number and you are convinced you’re watching a major studio film. To put it bluntly, the film looks expensive–slow motion glass shards float elegantly through the air in the aftermath of a car crash. As you keep watching, that glossy sheen never fades. Striking establishing shots. Characters acting in front of meticulously designed studio quality sets. But, this isn’t a major Hollywood film. It’s not even a mid-budgeted indie.  No, it’s a student production–a senior year thesis from the Savannah College of Art and Design. Levy and his team’s film is a notable accomplishment–a brilliant combination of strong psychological narrative mixed with a high-end production look, all on a moderate budget.  It’s further proof that in this digital age where talent is no longer restrained by technical limitations, ambitious creators are free  to…well…create, playing  in a sandbox where nothing is off limits.

In the spirit of a great Twilight Zone episode, The Secret Number is a cerebral, eerie tale. A psychiatrist attempts to treat a crazed professor who is confident that a hidden integer lies between 3 and 4. As one man becomes further obsessed with the impossible, the other begins to lose grasp on the possible, questioning the nature of reality and its relation to memory and the past. While the setup–incredulous therapist versus seemingly manic patient–isn’t a unique one, the story’s direction is still ultimately surprising. The film delivers an ending that works with the mind in the best possible way, explaining just enough without overstating its resolution.

The Secret Number feels polished, not once exhibiting the trademark giveaways of a student production. The visuals are sharp, the camera moves well-thought out, and the acting solid. The music is especially notable. Composer Jan Morgenstern’s score is a rich, professional tapestry of piano and creepy atmospherics that would be right at home in a major studio release.

The most impressive thing about The Secret Number‘s numerous visual effects is how they don’t look much like visual effects at all, instead organic and completely integrated into the story. Levy and his team aren’t interested in making a cg showreel, but rather more concerned with effect shots that complement their narrative. I encourage all to check out the film’s visual effects breakdown, shot previsualization, and behind the scenes featurette to see how the team of digital wizards were able to bring their mysterious story to life.  Altogether, the film took two years to finish, a long journey that came to completion both due to Levy’s tenacity and a successful crowd-sourcing campaign. The rest of the budget came from Levy’s own pockets.

But, it was all money and time well spent. The film received a slew of accolades on the festival circuit before its eventual release online. And, Levy has gone on to gain a job as a Camera & Staging Artist at Pixar Animation Studios. He’s also the creative mind behind the Blender Foundation’s 15 minute CG animated short Sintel, which has already racked up 3 million plus views on youtube and has been featured here on Short of the Week. I may be going out on a limb here, but I have a feeling Levy’s future is going to be quite bright.