The classic underdog takes on new meaning in this short animated in simple, graphic shapes.
READ REVIEW
Next Previous 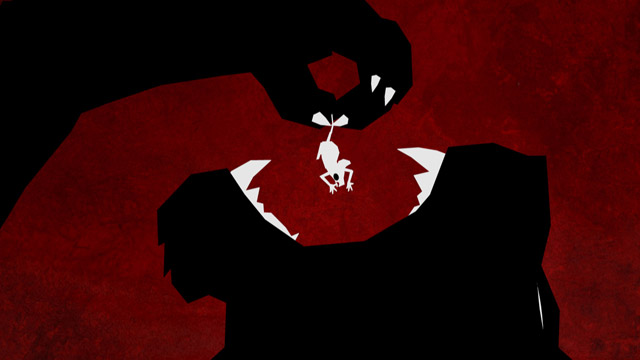 Fables are morality tales—advice passed on from someone wiser before us trying to save our hide. We experience many throughout our lives, but some become more relevant at different times.

In La Queue de la Souris (A Mouse’s Tale), a mouse runs into a hungry lion who spares his life on the condition that he find him bigger, better food. But the lion’s tastes can’t be satisfied. While the fable seems reminiscent of Aseop’s famous morality tales told with animals, I couldn’t find a clear origin.

If you’ve seen the highly-polished, The Gruffalo (Studio Soi), you may wonder—”Why another story about a mouse?” Well, it’s simple. The mouse is a great character because he’s instantly an underdog.

Take a nostalgic look back at the 80s, and you’ll remember the formula well—The loser crew, tired of being oppressed, decides to stand up to the establishment and take back control winning the hearts and minds of the crowds around them. That single line describes Airheads, VHS, Revenge of the Nerds, and way too many to write down in one place (you 80’s kids know what I mean).

It’s the underdog story. And somehow in this climate of Occupy, the 99%, and a growing disillusionment toward politics, that underdog story seems more relevant than ever. Like rallying cries, these stories are meant to challenge the status quo and divide audiences into those who get it and those who don’t. In it’s own little way La Queue de la Souris (A Mouse’s Tale) is a part of that resurgence.

The film’s aesthetic is graphic and simple—channelling a bit of Jossie Malis (Bendito Machine)—to tell a very visual story through shape and composition. It’s an effect that brings a lot of focus to the massive size difference between the mouse and the lion.

La Queue de la Souris (A Mouse’s Tale) won Europe’s Cartoon d’Or back in 2008. Since then, Ben has teamed up with the directors of A Town Called Panic on a feature animation called Ernest & Celestine which screened at Cannes and is due out later this year. It’s a story about a bear and… lo and behold… a mouse.