The life of a grizzly in a Canadian national park from the perspective of data points and surveillance cameras presents a fascinating look at what it means to be wild in this interactive film from the NFB.
READ REVIEW
Next Previous 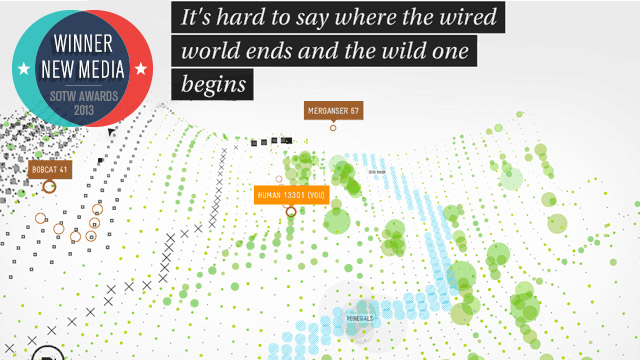 Interactive films are quickly maturing into a very powerful storytelling medium, and the NFB is clearly leading the way. We’ve featured past favorites (Welcome to Pine Point and Brother Soldier), and Bear 71 is another fascinating story experience.

Bear 71 follows the life of a grizzly bear in Canada’s Banff National Park from the moment it’s tagged and collared by park rangers to it’s death. The story is verbally told from the bear’s perspective but seen from the perspective of the many surveillance cameras surrounding the park.

“Everyone wants to see a grizzly bear. But, of course, no one wants to be killed by one.”

The general idea of a national park is to preserve a small piece of nature so that animals may go on living in the wild without  humans interfering.

But of course, humans are there. And, as we learn, even in our most earnest efforts to protect the wild, we can’t help but change it. This observer effect has created a “new” wild. One where animals are kept under close surveillance and have new obstacles to deal with like collars, roads, train tracks and the general meddling of rangers trying desperately to keep the wild world and the developed world separated.

And yet, as much effort as we expend trying to separate these two worlds, they seem destined to draw closer together. In the film, we see grizzlies and vacationing families share the same trails—even the same rub trees (where animals go for a back massage). Deer, elk, and bears learn to climb fences and cross highways.

This sets forth an inevitable collision between kings.

“I guess it’s kinda like surveillance everywhere. It’s partly there to protect you, and partly to protect others from you.”

As we continue to grow and develop this planet and this culture, are we losing the real wild?

We’re in a new era of surveillance where a staggering amount of data about your life is being recorded and made available to everyone. With cell phones and cookies tracking the websites we visit, the friends we have, the stuff we like, and the places we go, it’s not hard for us all to feel a bit like bear 71.

The visual design by Aubyn Freybe-Smith presents a beautiful abstraction of a landscape as seen through collected data points. It’s like one of Joshua Davis‘ algorithmic illustrations brought to life in 3D.

The interaction of the film (done by Jam3) follows the proven formula of combining linear, story-driven audio with exploratory imagery that’s worked so well in past NFB interactive films. As you listen to the first-person account of bear 71, you’re free to explore on your own by peeking into various surveillance cameras placed around the preserve. The challenge here is that I often worry that I’m clicking on the wrong thing at the wrong time. The few directed moments where a video is chosen for you are a welcome relief.

Bear 71 even allow you to step into the experience yourself. If you accept it, the film will use your webcam to observe you and broadcast it to other viewers. Another part of the experience is tied in with an installation at Sundance that treats the festival grounds as a sort of preserve—tracking and recording people and creatures alike as they pass through.

Does the film romanticize nature? Maybe. I grew up in rural Alaska seeing both the beauty and the brutality of nature. Are animals completely innocent? If they feel love and pain, why not anger and resentment? Still, the core message around man, nature, and surveillance raises excellent questions and presents a fascinating experience. Check it out now.