A sister fondly remembers growing up with her brother as she struggles to deal with his deployment to Afghanistan in this interactive film from the NFB.
READ REVIEW
Next Previous 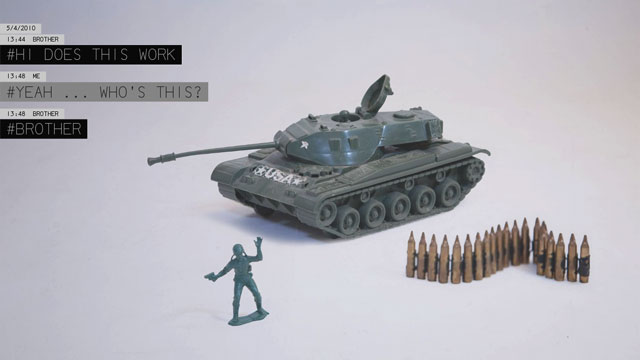 A sister tells the story of her brother while he fights in Afghanistan through a combination of his favorite possessions from their childhood and snippets of text messages from the warfront. The total effect breaks the mold of the stereotypical military family. We see parents with buried feels of guilt (Did GI Joe toys and BB guns encouraged his desire to join the military?) We see a liberal sister who seems caught between ideology and reality. But most of all, we see the endearing love of a brother and sister. That connection of growing up together, watching each others’ failures and triumphs, holds strong even once you’ve grown a world apart. The film ends, like the war itself—which is to say it doesn’t really end.

The NFB is doing a fantastic job pushing these interactive stories into the world. They’re bold, experimental, and they don’t always work, but the NFB deserves credit for trying. Every new experiment requires a bit of your patience to learn the navigation and get into the storyline. But for those that work (like Welcome to Pine Point), the end effect is something that can exceed a short film experience.

Brother Soldier does it well by keeping the interaction simple and the story always moving forward (this is where One Millionth Tower fell flat—I can’t tell you how many times I had to listen to the same opening video voiceover). The visuals are simple—photographs and animated text—with a simple interaction model that you learn quickly. The juxtaposition of the two story lines is genius and plays well to our multi-tasking habits.

Oddly enough with these interactive films I feel as though I have less control over the story. How do I stop it? Where’s the close button? How do I jump ahead? With interactive films in general, much of the experience is randomly clicking and waiting to see what happens. Not only do I not know what the story is, but I don’t even know how to approach it. That’s too much uncertainty for the viewer just looking to catch the next episode of Top Chef.

If you look at games, over time certain formats emerged: arcade game, first-person shooter, simulators, adventure, strategy. All with a different set of interaction models and expectations. If you’ve played one first-person shooter game you can play another. We need that level of familiarity with a format before it’s ready for primetime. What will that look like for interactive films? That’s what the NFB, Chris Milk, and others pioneers are looking to find out.