When talented directors at the famous Aardman Animations studio are given free reign, they come up with crazy stories like this one about a dinosaur who's good at math.
READ REVIEW
Next Previous 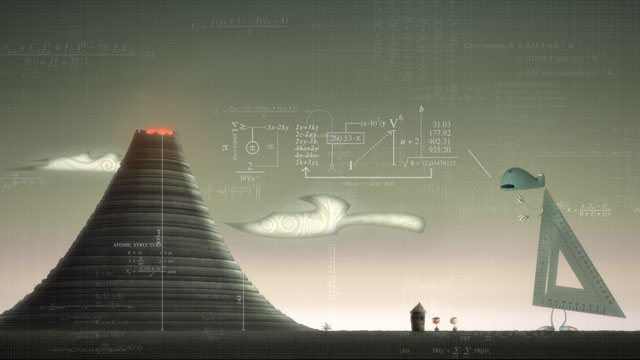 Oscar winning studio Aardman may have made their name with family-friendly clay model animations Creature Comforts and Wallace & Gromit, but in more recent times, with a stable of directors under their wing, they’ve been turning out TV shows, shorts and commercials at an alarming rate. With recent successes including a BAFTA for their gritty, yet stylistic animation The Pearce Sisters, the world’s smallest stop-motion animation Dot and the world’s largest stop-motion animation Gulp, this eclectic studio is regularly turning out some of the most eye-catching, innovative animation you are likely to find online.

Peter Peake, director of Aardman’s latest attention-grabbing short film, Pythagasaurus, has been working with the studio for over 15 years with his credits including character animator on Wallace and Gromit in A Close Shave and additional animator on the Creature Comforts TV series. Whilst his latest work, including manning the helm on numerous high profile adverts (spots for Walkers, Coca Cola, and Hubba Bubba to name a few) for the studio , has done wonders in increasing the ever-expanding Aardman brand.

Brimming with fun, the narrative of Pythagasaurus tells that age old story of early man, the sudden appearance of a mysterious volcano and a maths loving dinosaur and Peake’s film has all the usual trademarks of an Aardman animation. Visually stunning, this is an animation full of carefully considered character design, meticulously detailed landscapes and stylistic flourishes that leave you in no doubt about the quality of craftsmanship involved in its production. However, where Pythagasaurus really stands out is with its own quirky brand of humour. Where Aardman usually aims its comedy at pleasing the whole family, this prehistoric tale targets its laughs at the more mature viewer. With talking dinosaurs and maths equations at its core, you would be forgiven for mistaking Peake’s film as an educational children’s animation, but Pythagasaurus soon reveals itself to be an altogether different beast. Featuring the vocal talents of British comedians Bill Bailey, Martin Trenaman and Simon Greenall and including the occasional bloody death and casual profanity, this latest animation from Aardman feels more like Ice Age if it was made by the Family Guy team.