How to Eat Your Apple

How to Eat Your Apple 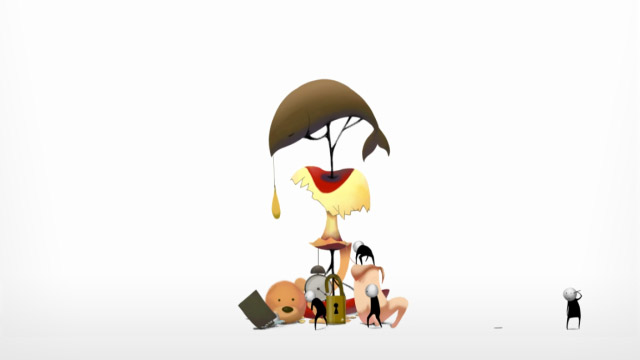 For the more art-inclined out there, I bring you this very short experimental film from animator, Erick Oh (Way Home). I won’t try to dissect a specific meaning from it, but I will say that I get an overall sense of a complex-ification of seemingly simple things. It probably says more about today’s society than about the self—perhaps better titled, “How We Eat Our Apple.”

But regardless of meaning, his use of symbolism is fantastic. The film plays like a surrealist painting brought to life. You might even call it an art film, and yet it separately itself from the many art films I’ve made the mistake of sitting down for in the dark corners of art galleries around the world. Most of which seem to be telling me the same thing over and over—that my always-connected, instantly-gratified mind has lost patience for these slow, amateur, and ultimately un-interesting works of art. I’d like to shake the gallery curators and tell them there is good experimental work out there. And How to Eat Your Apple is proof—an art film that delivers an obscure message AND is interesting to watch.

I exchanged a few words with the Korea-native Erick Oh (currently an animator at Pixar) to try and pry more meaning out of the film.

On your website, you say the film presents a quintessential question on life. What is that question for you?

It says it all. What is life? After all, life is a life-long journey to find out what life is all about. Breathing in the future and breathing out the past. We encounter and go through a variety of elements and happenings on the way and they all turn into countless different questions on life, change, death, relationship, love, loss, dream and so on. No one can possibly answer them all because actually there’s no such a thing called the right answer that applies to everyone and everything. So we keep searching. We keep asking and keep thinking. Not only with this particular piece, I believe that most of my other films and art works are there to give the viewers an opportunity to stop for a minute from the daily repetitive routine and question themselves about where we are from and where we are heading.

There’s an interplay between humans and nature. And there’s a lot of symbolism (a common technique in surrealism). Where did you get the symbols from? and what do they mean to you?

I’ve been using these symbols and metaphors for years which are sometimes abstract while sometimes very representative like fish, butterfly, clock, key and so on. First of all, the reason why I use a lot of symbolism is to open the viewer’s point of view. I have a clear message and idea behind every single component but I’m not willing to push the viewer to only see it in that given way because I always want my art to be interactive. The reason why I often use a minimal color palette on my work is also because I want people to imagine their own colors as well. Let me talk about the character with a number of holes on his face though. Here, a ‘hole’ means literally a hole to inhale and exhale—accept and exit. It’s an eye, a mouth and an ear. We’re always eager to see, listen, speak and eat. The number of holes stand for how much we desperately desire and crave things. When our greed exceeds, we end up having a bunch of holes all over our head more than we need. Therefore, I’d like to say that this character is our self-portrait.

The story is told in real time from one camera view, setting aside most standard film conventions. Why present these ideas in this almost theater-like experience?

To me, developing the idea for a film project has been a little different from the way I’ve done other art forms because the film language has more technical rules and processes to follow. Not only the medium but also its content. The idea should be very well organized and logical enough to lead a certain narrative that can flow with the time elapsed. I literally wanted to dare break this frame with How to eat your Apple. As a result, as you pointed out, the final piece turned out to be more of a moving illustration than an animated film. I think it’d make even more sense when showcased in a gallery space than in the theater. The running time of 1 and a half minute isn’t really important here. You look at the still image artwork, take your time watching it over and over and feel free to connect the given objects by yourself and create your own story.