A dung beetle sets out to roll his prized find back along the long road home.
READ REVIEW
Next Previous 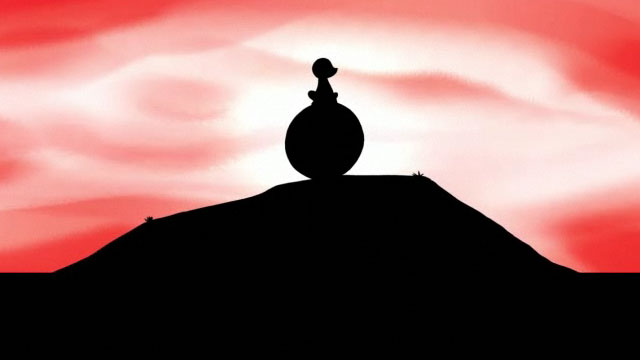 Part and parcel with my established love of anime is my fondness for Ben Ettinger’s AniPages Daily blog. Though misleading in regards to its frequency, Ben is a very astute student of animation, and much of my knowledge of individual animators within the anime world comes from him.

So when he goes out of his way to recommend a short filmmaker, especially one outside of an “anime aesthetic” I make sure to make time for it. Following his enthusiastic recommendation I found Way Home.

Way Home follows the story of a persistent dung beetle. Upon discovery of a auspiciously large prize of excrement, the film details his dogged attempts to bring home the “bacon”, i.e. poo, to his wife and child. Touching ^_^.

The film is rather sentimental in that regard, but there is a lot of other things going on. There are challenges and difficulties that present themselves, thus requiring perseverance from our enterprising dung beetle, but they are not of the heroic variety per se. There is a sense of whimsicality and humor in the classic cartooning aesthetic on display in the dung beetle’s motions and gesticulations, evidenced by the way he contorts his body to the task of moving the prodigious dung-ball; outsized yet minimalist expressions on its face betraying the effort involved.  But while this style and the vague anthropomorphism of the character design are reminiscent of classic American comedic animation, in Way Home the humor is not an end unto itself. There is a palpable passing of time that is portrayed, and thus the film surprisingly tilts towards the elegiac, becoming a meditation on work and striving and—ridiculously enough—the nature of being.

The background design is hint enough of this more melancholy intention. The dramatic use of contrast and shadow in all its minimalistic glory and supplemented by pastels, is gorgeous and provides the opportunity for some stunning compositions. Yet this starkness and focus on natural beauty necessarily draws one mind up towards contemplation. Additionally one versed in modern animation cannot help but feel the influence of Michael Dudok du Wit in this style, which, through reference, imbues the film with a certain sadness. My suspicions were confirmed by an interview Mr. Oh gave to AniBoom where he credits Dudok du Wit as an inspiration.

Ultimately Way Home, is a holistic and moving short film. Erick Oh, by recombining established animation techniques presents a unique perspective in hand drawn animation through an original and beautiful aesthetic. More so, he inspires in this film, through tone and content, a philosophical examination of nature and being that I won’t spoil here, but I definitely carried with me afterwords.