**Currently Offline** - A moving tale of a daughter, an absent father, and the ties we share that surpass time or logic
READ REVIEW
Next Previous 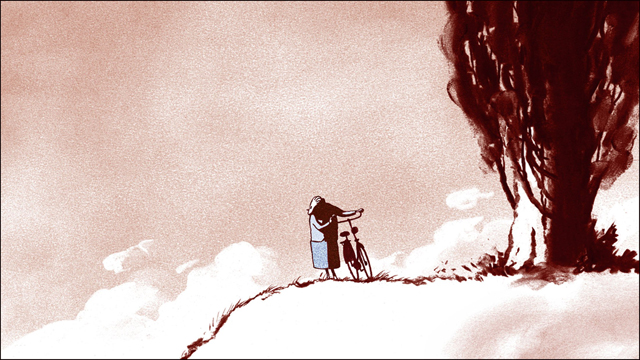 In 2000, Father and Daughter won the Academy Award for Best Short Film for its Dutch director Michael Dudok de Wit. For such a short (eight minutes) movie it has a remarkable capacity to move an audience. The story of a father who leaves his daughter and rows off into the ocean, it commences with two figures riding their bicycles, the smaller of the wheels in perfect symmetry with the larger. The father and daughter climb to the top of a hill at which point the father alights, hugs his daughter before climbing down to the seashore. He cannot resist running back and holding the girl one last time before rowing off towards the distant horizon. The girl runs up and down against the skyline as the sun gradually sets. There is no explanation. She returns again and again to her vantage point on the cliff to peer out to sea for his return. Each return marks a passage in her life from child to adolescent, mother and eventually old woman. And still she returns to search for the father who left her. Of course it is not literal, of course her father will never, can never, return. But still she hopes.

Viewed as allegory or truth the consequent sense of grief and a longing for the return of the father is so intense that one attaches an individual interpretation or significance to the movie, be it a lost father, child or love. In the creator’s own words it is about “longing” that never diminishes despite the passage of time, defeating all logic.

The landscape of the Netherlands with its wide skies and tall poplar trees is the backdrop to the movie. The sky and landscape is a delicate colour wash of brown, grey, sepia, sometimes hints of green or blue. The drawing is pencil and charcoal, the drawings scanned and colour added digitally. Remarkably in a film that deals in emotion, there is no facial detail whatsoever. Often the figures are drawn in silhouette. This can be remarkably effective in conveying mood: the old woman toiling up the hill, the flapping arms of the child, the teenager gliding down the slope on her bike, which in another later scene will simply not stand upright. Always the brushwork is spare, perhaps a stroke that transforms into a slender girl or a smudge for the squared old woman. Each shot is exquisite: the long shadows of trees or bicycle; seascape and sky, vast and empty. The seasons change with a rustle of leaves or the girl struggling up the hill against a wind that bends trees. The music by Norman Roger is sympathetic to the theme, essentially a lilting tune but arranged with tone and depth.

This astonishingly accomplished and poetic movie fulfils in every sense. Michael Dudok de Wit was born in 1953 and educated in Holland. In 1978, he graduated from the West Surrey College of Art in England. His films include Tom Sweep (1992), The Monk and the Fish (1994) and The Aroma of Tea (2006). You might also have seen the rather classy commercial for United Airlines, A Life. Given his draftsman-like qualities, Michael is much in demand as an illustrator for books. My Christmas present from my family, and well recommended, was Best of British Animation Awards Vol.4 that includes Michael’s Oscar winning short.