A look into the culture of Insane Clown Posse fans who attend the annual Gathering with a shared love for cheap partying, a sense of family, and escape from dysfunctional lives.
READ REVIEW
Next Previous 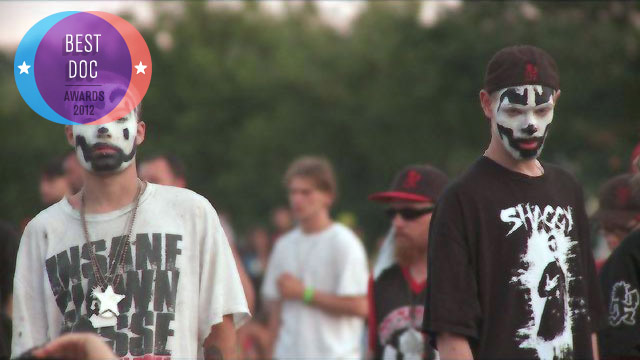 The documentaries of Sean Dunne may be based in fact, but his flair for storytelling and knack for finding larger-than-life characters give his films a magical, dramatic quality usually only found in the world of fiction. The subjects of Dunne’s quirky films often feel like they have walked straight out from behind the highly polished lens of fiction film and staggered into the gaze of the all-inquisitive documentary filmmaker. Paul Mawhinney, the feature of early documentary The Archive, feels as if he’s come straight out of Stephen Frears’ High Fidelity or could even be a lost relative of comic book guy from The Simpsons. The Bowler‘s Rocky Salemmo could have inspired Bill Murray’s fantastic performance as Ernie McCracken in Kingpin, while you can’t help but think of Forrest Gump when watching Dunne’s portrait of Jonny Corndawg in Stray Dawg. For his latest, and probably most expansive film, American Juggalo, the filmmaker turns his camera on a whole clan of people who feel as if they could have stepped straight of a Harmony Korine movie.

What is a juggalo? Let me think for a second, Oh, he gets butt-naked. And then he walks through the streets winking at the freaks. With a two-litre stuck in his butt-cheeks.—Insane Clown Posse

With American Juggalo Dunne takes us on an eye-opening 23 minute journey into the world of the Juggalo, hardcore fans of the musical group Insane Clown Posse, with a penchant for make-up and an unwavering dedication to the Detroit duo. Every year for 4 days these devoted fans of ICP leave their jobs and their everyday lives behind and flock together for the Gathering of the Juggalo, a festival organised by the group’s record label. Dunne’s film explores not only what defines a Juggalo, but also what attracts people to this much maligned lifestyle.

As a filmmaker, Dunne appears to have an ever-increasing talent for making humorous documentaries without making them feel overly patronising or exploitive. His subjects appear at ease in front of the camera and are often all too willing to open up and share their inner-secrets, although in the case of the Juggalo’s this could have a little something to do with the copious amounts of drugs and alcohol consumed at the Gathering. Of course the eccentric disposition of Dunne’s interviewees doesn’t exactly hinder the likability of his films.

When asked what makes a documentary a good film, filmmaker Alex Gibney replied “the subject itself is not a movie…you have to put it together in a way that makes it compelling viewing for people who’re going to come to see it. And, hopefully, there’s enough of the author, too, sometimes in indirect ways, that makes the documentary interesting”. In some way I’d like to think this is why Dunne’s films are so engaging, he makes the films he wants to make, the films he would want to watch and he puts enough of himself into the documentary to make it truly interesting.