Rocky Salemmo recounts story after story of his wild days hustling money as an accomplished bowler in this well-shot documentary by up-and-comer Sean Dunne.
READ REVIEW
Next Previous 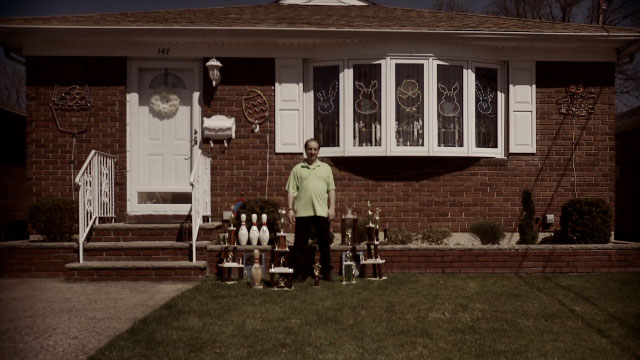 There was a time when you really had to search out a short documentary film, a time when the fiction film was most definitely the alpha male in the world of the short. However, over the last decade, with the ready availability of cheaper production equipment and the Internet providing an arena to screen, the documentary short definitely seems to be a format in ascension in current times. A quick browse through Vimeo or YouTube will bring forth an abundance of short docs and a wealth of competition for filmmakers operating within this field. This means that if you want your doc to stand out, it has to be engaging, entertaining and well made, under this criteria, Sean Dunne’s The Bowler is definitely a stand out film.

Meet Rocky Salemmo. He’s a ramblin’ gamblin’ man. For the majority of his adult life Rocky has hustled bowling for a living.

Dunne’s hugely entertaining, character-driven doc tells the story of Rocky Salemmo, a larger than life man, who has spent the majority of his adult life in the bowling alley, gambling for a living. Like a heady combination of Bill Murray’s Ernie McCracken from Kingpin and Joe Pesci’s Tommy DeVito from Goodfellas (without the violent episodes), Salemmo feels like he was born to be in front of the camera. Rocky is a seriously hyper personality (he claims he doesn’t take coke as it brings him down), he tears up the screen like a wild man, spitting out stories like his life will end if he doesn’t tell them. It’s these rambling antidotes that form the basic structure of Dunne’s film, it feels like he just set-up his crew and waited for Rocky to let loose (much like a crew shooting a wildlife doc would do).

However, there’s no point in having a captivating character with a wonderful story, if the production values don’t match the levels set by the content.

Shot on the Sony EX3, the film features some sumptuous cinematography by director of photography Hillary Spera, as her camera seems magnetized to Rocky and his manic behaviour. The interviews are beautifully constructed and whether we’re in the low-lit bars or Rocky’s mother’s busy living room, Salemmo is always the given space he needs to frantically tell his stories. Often overlay the distinctive voice of our storyteller, The Bowler is also filled with a wealth of hugely effective cutaways ranging from random bowling alley shots, to close-up shots of Rocky bowling, laughing and dancing. Salemmo’s quick-fire delivery is perfectly matched with the fast paced snappy editing from Kathy Gatto and her cutting does a great job of painting the world in which Rocky believes he lives.

Dunne seems to be rapidly becoming a name to watch in the world of the documentary short and his distinctive style and charming stories are sure to win him an army of followers. If you liked The Bowler, be sure to check out the 2009 Sundance selected short The Archive, another fascinating short focusing on the owner of the world’s largest record collection.