Maximall means maximalism in this outrageous and gorgeous chase film that assaults your eyes.
READ REVIEW
Next Previous 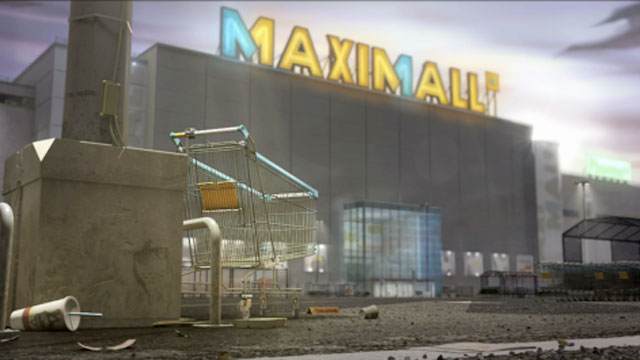 A couple of weeks ago I reviewed a pair of 2010 Supinfocom Arles graduation films, The Makeover and Botanica Liberta, that not many people had seen. I hinted at a whole cache of films from that class that had yet to get much exposure compared to the wild online success of Meet Buck and Hambusterfamous examples from that same graduating group, but I got distracted from bringing these other films to light. However let’s resume where we left off and review what, in my mind, is in the running for most impressive of the entire class, Maximall.

At its core the short is yet another chase film. This can get tiring I know, but when you watch a lot of these they become a genre like any other and you can appreciate the changes in approach, style, and nuance these young student teams bring to the films, similar to the way that I can watch 5 kung fu films in a row and not feel they are repetitive in the least. The film centers on a young worker at a big box-store anchored strip mall. Evidently he is the last to leave that night and as he is starting up his scooter to go home he finds himself scarily, absurdly, targeted for destruction by sentient shopping carts.

As ridiculous as that sounds, the film is not Hambuster, the other famous example of French chase-horror. Hambuster, while introducing genuine horror aspects to this genre heretofore dominated by lightehearted slapstick, still maintained a firm footing in the colorful, non-threatening cartoony design aesthetic. Maximall diverges, with darker, more realistic settings and animation, similar to Botanica Liberta. The background animation is a cut above, as the pursuit lures our protagonist into an exquisitely realized Ikea-like store. Familiar horror-tropes like hiding just out of view, pop-out scares and POV’s from the cart’s perspective are used liberally and effectively.

As ridiculous as the conceit is, the Maximall team of Axel Tillement, Nawal Rahal, Hadrien Ledieu, Axelle Cheriet do not play it that way, and the result is genuinely tense, as the relentlessness and overwhelming force of shopping carts induce zombie-esque levels of terror. This otherworldly force builds and builds towards the film’s beautifully surreal climax, producing a closing metaphor that is not labored in the leastour materialism produces an overwhelming amount of stuff that literally traps us.