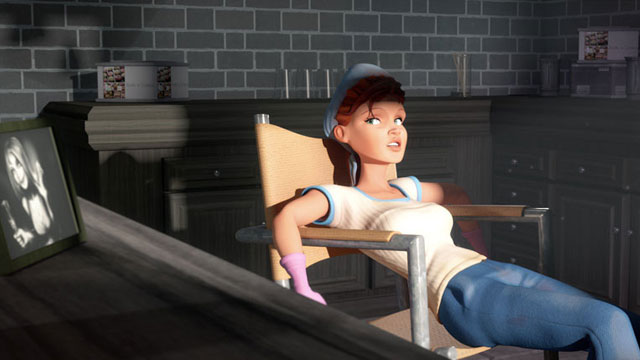 The Makeover is a welcome addition to the French animation school Supinfocom’s impressive portfolio. In the mid-2000’s the most buzzed about student films were exploring the amazing photo-realism that was taking hold in video games. The last couple of years have seen crazy cartoony physics come to the fore epitomized by the breathless ingenuity and clever character designs of Meet Buck (which happened to be made by classmates of The Makeover team). Yet there is another grand tradition of animation, the Disney Princess film which holds a special place in my heart. The Makeover is a fun mashup of a few of these films—a dash of Cinderella, a liberal dose of Beauty and the Beast, with intriguing cameos by Peter Pan and The Little Mermaid, all in a sly, Enchanted-like modern setting. The result is a pretty and fun film, that is notable for its character design and facial animations.

We open with our heroine scrubbing away in her modest home. She seems stressed out. She could use a break, and, as we learn, a little more romance and attention from her rat-race working beau. Can a fairy Godmother spruce things up a bit? You betcha!

Even though Tangled might have been my favorite feature of 2010, I’m not completely blind to some of The Makeover‘s shortcomings. The character design and facial animations are splendid for a student short, but there are reasons that most students opt towards more cartoony designs, as the heroine’s face too often registers extreme emotions of shock and annoyance. The structure of the story is a little off as well, as no real tension is developed.

Still student animations are eye-candy first and foremost, and when The Makeover starts to sprinkle on the fairy-dust, we are treated to some excellently choreographed and animated scenes. With its superb design and bravura fantasy sequences, The Makeover is 7 minutes of short film magic that you need in your life.