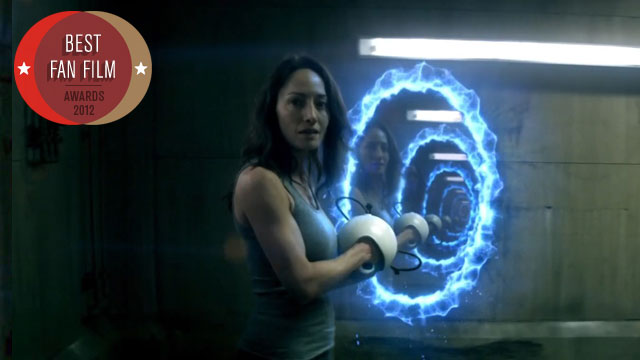 I’ve been basically dead to the world of video games for a few years, so the brand Portal doesn’t mean much to me. A hit 2007 video game from the publisher Valve Corporation, the game has sold over 4 million copies and has a sequel in production, so I’m guessing it means a lot to a ton of video-game geek fans.  They certainly responded well to this fan-film, Portal: No Escape, building a groundswell of buzz that is creating the most remarkable online short film launch I’ve ever seen. As of this article’s publication the film has been viewed 2.2 million times in its 48 hours of being online. Holy cow! Maybe Kanye or Lady Gaga can do that, but short films do not do that. No way, no how. And yet somehow director Dan Trachtenberg’s 6 minute piece has.

The film stars Danielle Rayne. She wakes up locked in a room with no idea of where she is or how she got there. Stuck for a while, she eventually discovers a portal gun, a device that links space between two holes. This is the heart of the gameplay mechanics, but Trachtenberg does a good job in introducing the concept to viewers like me who come in cold. Along the way the film has some fun with exploring the gameplay’s unique cinematic possibilities.

Despite the title, “escape” (at least from the room), is basically the extent of the plot. This will be a little light for some, but there is much to recommend nonetheless. Rayne, has little to interact with and no dialogue, yet does a superb job, believably selling the initial confusion, while quickly turning on the bad-ass. The production design is stark, but likewise believable, and the portal gun is pretty cool. More than anything though the VFX are the draw. While not objectively superlative, the gameplay concept brought to life does instill a geeky rush, and has pushed many internet commenters to breathlessly demand a full Portal feature.

The film debuted at Comic-Con last month to a packed house, which surely helped seed the film for its successful online launch. Also helpful is Dan Trachtenberg’s other career as an internet geek commentator. A commercial director, Trachtenberg is also the host of the Totally Rad Show, and is a frequent guest on the influential /Filmcast. The last time we saw his work was back in March when he directed a particularly memorable episode of the Twilight-Zone-esque web series Blackbox TV.

This short was shot over 1 1/2 years ago, and it has taken this long for the VFX work, much of it donated, to be completed. Supervision of the VFX is courtesy of working professional Jon Chesson and the music is provided by Mike Zarin, who is oddly known best as the composer of the first Inception trailer.

Fan-films continue to be a great avenue for filmmakers to get attention for themselves, provided they do them well. Video games in particular have proven to be fertile ground, as this year the Half-Life fan-film Beyond Black Mesa went viral, and previously, the bizarre World of Warcraft documentary Avatar Days experienced great exposure on the web. Will leveraging the dedicated fanbases of developed properties be the new path to glory for short filmmakers? We’ll see what Dan Trachtenberg gets up to next, if a ton of development dollars get thrown his way after this film, you can be sure that many many people will try and follow suit.