Ormie the Pig is desperate to get the cookies on top of the fridge, but is constantly stymied, in this modern day slapstick.
READ REVIEW
Next Previous 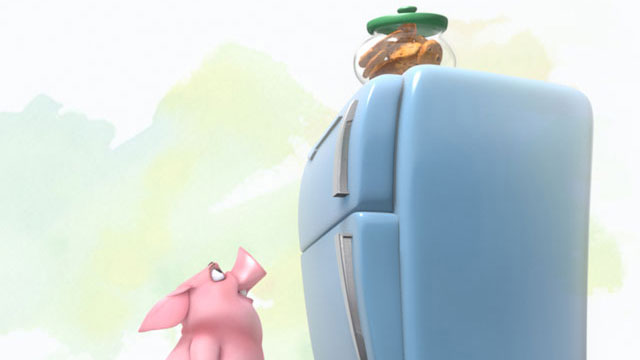 One of the things I certainly love about animated shorts is the freedom creators have to be experimental and show the world something it has never seen. That said, chances are, the earliest animated shorts you saw and the ones you first fell in love with have been seen many, many timesthey were some form of funny-animal slapstick, like Warner Brothers’ legendary “Loony Tunes” films. You didn’t have bad taste either. Many animation enthusiasts far more knowledgeable than me passionately proclaim that there was a level of genius to those works that has yet to be matched.

So if part of you still pines for that largely bygone aesthetic, Ormie by Rob Silvestri provides the 3D update to this beloved type of film. While I find it blandly designed, the gag-writing and the animation execution of this short film is truly stellar, allowing it win a raft of awards during the 2010 festival season. The premise is simple, a pig wants to eat the cookies that are out of his reach on top of the refrigerator. The methods he employs to try and do so are anything but simple however.

I first saw Ormie at the Seattle International Film Festival 2010 where it nabbed best animationone in a string of awards for the film that included prizes at prestigious stops like Palm Springs and NY Children’s FF. Silvestri works and created the film at Toronto’s Arc Productions, an animation studio that has worked on big 3D pictures like Gnomeo and Juliet and the feature adaptation of 9. The studio’s newest feature project is titled OZ3D, and will mark Silvestri’s feature film directing debut! Congrats Rob, look forward to seeing it.