A family's awkward photo session brings its underlying issues to the surface in this surreal animation.
READ REVIEW
Next Previous 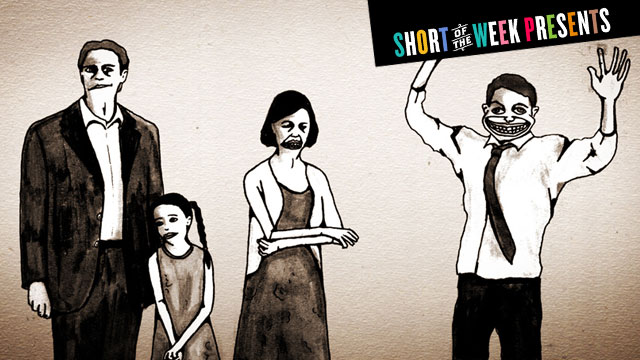 His previous film, Stand Up, was outstanding and earned our praise here on Short of the Week, but Joseph Pierce hasn’t been resting on his laurels. He earns a rare second feature, this time for his award-winning A Family Portrait, debuting today. The film has enjoyed a healthy festival run, winning awards at the big animation festivals—the Grand Prize at Stuttgart, Best Debut Film at Hiroshima as well as non-animation festivals, garnering the Prix de la Presse at Clermont-Ferrand.

The story takes place during an awkward family photo session where a wife’s suspicions of her husband’s infidelity slowly builds to intolerable lengths. But as we soon learn, she harbors a secret of her own.

For the animation, Joseph used his own personal rotoscoping technique involving filming live actors, printing out each frame, drawing and coloring every frame, and then scanning and recomposing the sequences digitally. But what’s most interesting is what Joseph does outside the captured image. At key moments he reveals the psychological undertones of the characters through surreal exaggerations. When the wife sniffs the husband for suspicious fragrances, her nostril expands to envelope his entire head. It’s an amazing effect that does well in telling the untold story.

Joseph continues to make short films. His most ambitious film yet, called The Pub, is due out in the near future. Follow him on Twitter or his website, and read our Q&A with him which delves deeper into his inspirations and processes.