Watch a comedian turn funny into serious into downright disturbing in this incredibly expressive black and white animation.
READ REVIEW
Next Previous 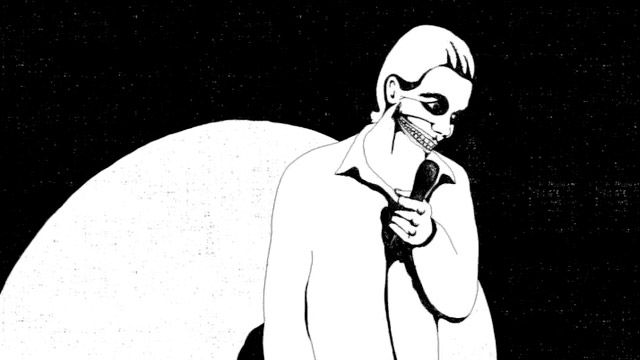 A great short, like any great feature film, will leave a lasting impression on you long after first viewing it. It’s been two and a half years since I first saw Stand Up by Joseph Pierce at the London International Animation Festival and I’ve been searching for it online ever since. It was one of the best shorts I saw in 2008 and upon watching it again, a few years and a few hundred short later, it still feels as fresh and inventive as it did back then.

Legendary British comedian Jimmy Tarbuck once stated, “comedy is the hardest job in the world!” and the pressure of being a stand up is certainly on show in Pierce’s rotoscoped short, as a comedian’s live performance slowly descends into a frank, some-what disturbing confessional.

Told through a single stand-up comedy routine, John J Jones performs to an unforgiving audience. As he loses their interest, his body rebels against him, and the truth behind the one-liners leaks through the cracks. This is car-crash comedy at its most compulsive.

Made as his graduation film for the Animation Direction course at The National Film and Television School, the director’s unique style and dramatic flair is on show in Stand Up, means this is a short that is head and shoulders above its competition. Pierce’s quirky rotoscope style sees comedian John J Jones urinate olives, transform from his young-self into his deceased father and experience a car crash, all on stage. These stylish touches add not only to the comedy of the film, but also to the tension of his short, as we witness a man in freefall on stage.

Stand Up reminds me quite vividly of the eccentric work of American animator Bill Plympton, whilst also containing obvious comparisons with other rotoscoped works, in particular the films Waking Life and A Scanner Darkly by Richard Linklater. However, to compare Pierce’s work with others would be unfair, as the director is just in the infancy of what appears to be a blossoming career with another short, A Family Portrait already earning praise and awards, plus a feature in the pipeline. What Pierce did with his graduation film was create a sparkling, eye-catching calling card for himself, and with the groundwork laid in Stand Up, we are destined to hear more from this talented artist in the near future.