A psychologically intrusive and darkly comedic world where the city's isolated souls are followed around by large urban monsters.
READ REVIEW
Next Previous 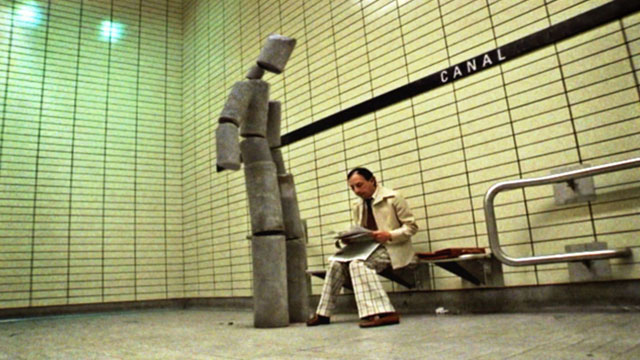 This film, Terminus (Latin for “boundary stone”) is a dark comedy about the self-destructive nature of the human mind and the dangers of urban isolation. In this film, a colossus made of concrete pilings follows a lonely man throughout the city tormenting him as he goes about his daily life on the subway, at the doctor’s office, and elsewhere. All the while, a strong, foreboding sense of mental anxiety builds as the man is ultimately driven to extreme ends.

Terminus hails from Spy Films (also behind the Short of the Week 2007 favorite, Alive in Joburg) who has developed a great reputation for their seamless integration of lo-fi and hi-fi visualization techniques (DV + CG).

I caught up with Trevor (a Canadian filmmaker and recipient of many visual effects distinctions including 2 Emmy nominations) to ask him some questions about the film.