We need to start by getting one thing straight—most of the curation we talk about today in our everyday digital lives isn’t true curation at all. Curation (with a capital C) is doing the hard work of searching through mounds of mediocrity, discovering work that has something new and interesting to say, and propping up it up for the world to see. Algorithmic curation has, so far, only been capable of telling us what’s already popular and social curation is simply reblogging, repinning, or rehashing what again is already popular. This is “curation” driven by a desire for scale, not for great content.

The reality is that great curation, the kind that shapes our collective culture, is hard work. Who’s up for the challenge?

How to Fix it

Short of the Week has been dedicated to the practice of Curation from the beginning. What goes into finding a great film? There are no shortcuts. The only way to consistently find great films week after week is having a great curatorial team and submission process. All too often, these processes are kept secret at the expense of creators, so we thought we’d pull a George Costanza by doing the opposite and let you in on what happens behind the scenes.

Great curation, undoubtedly begins and ends with a great team. The SOTW curation team is made up of 12 amazing individuals who come from a variety of film outlets. Some are festival programmers (Sundance, Tribeca, Chicago, Palm Springs), some are online programmers (Vimeo Staff Picks), and others are practicing filmmakers.

Our secret sauce, the taste of SOTW, comes from the unique combination of curators on the team finding great work, challenging each other, and pushing each other to improve.

As filmmakers ourselves who’ve submitted our films to hundreds of film festivals, we knew there was a better way to do submissions.

Yes, we wanted to do what we considered basic things of making sure our submissions were simple (all handled online) and affordable. But the biggest frustration a filmmaker faces when submitting their film is uncertainty. Not knowing if your film was ever actually seen (Did they lose my screener?). Not knowing who watched it (Was it seen by a volunteer film student or an experienced curator?). Not knowing when you’ll hear back. And above all—not knowing why your film has been rejected. Even great filmmakers get rejected many times over.

From this, we set out to make three big promises to all our submitters that every curator should consider:

Second, get back to people quickly. We promise a 7-day turnaround and most often filmmakers get a response in just 2 or 3 days.

Most importantly, offer feedback. For the first time, filmmakers can now get constructive feedback on what worked and what didn’t from the industry’s top curators from Vimeo, Sundance, Palm Springs, and other major festivals. We charge an additional fee because feedback takes time, but for creators of all types, feedback is an important part of getting better. Some of our most heartfelt thank yous from filmmakers have come not from those who are accepted but those who are rejected yet feel incredible relief to finally get real, honest feedback on their hard work. 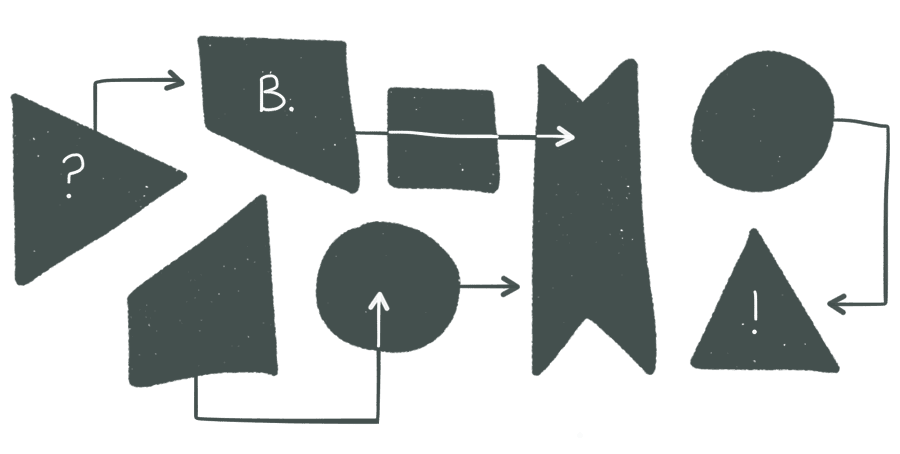 We have a 2-step process for accepting films. First a submission is viewed by a Screener. If it passes, it moves on to an Editor for final approval. Why two steps? This ensures that a film speaks to an individual yet has a broader appeal.

We look across 5 attributes when we judge every film—Concept, Emotion, Craft, Innovation, and Memorability. Our scale is simple—Mediocre, Good, Great. Mediocre docks you 1 point, Good stays even, and Great gives you 1 point. We look for greatness, so if you come out in the positive, that’s a thumbs up from the team.

To manage our submissions we use Submittable—an unusually powerful submission platform that we rely on every day. There’s really nothing out there like it. We use Zapier to pipe notifications of new submissions, status changes, and new notes from Submittable into our communication channels on Slack so the team can track every step of the process.

We receive about 250 submissions every month or 3000 a year. Every one of these is watched in full by one of our team curators. Of those, the top 17% make it to a second round and are passed up to our editors. Finally, the top 4% of the total receive the blessing of the team and the honor of Short of the Week.

Compare those numbers to Sundance—the most competitive film festival—and you begin to see what level of quality we look for. Last year, Sundance took in a total of 8021 submissions. Of which, 300 (4%) made it to a second round with 61 (1%) finally accepted.

Put It To Work

To get a even better sense of what happens with a submission, let’s walk through a couple from start to finish including the gritty back-and-forth between the curators on the team.

Better known by his pseudonym, J.G. set the Guardian cryptic crossword for 55 years. In December 2012, crossword number 25,842 appeared in the paper with a series of clues that, once solved, revealed a personal message from J.G. to his puzzle-solving followers.

A puzzle in itself, this short film unpicks crossword number 25,842 to journey into J.G.’s world of clue-making: the memories that he draws upon, the themes that inspire him and the faceless solvers he imagines as he writes.

Paul Hunter—I wish it wasn’t quite so polished, but it is an interesting tale, with touching detail, and a wider context (assuming Americans know what a cryptic crossword is…)

Ivan Kander—Ha. It is almost too polished, isn’t it? We should probably feature this, but it left me a bit cold, to be honest. Rob? Jason?

Rob Munday—I thought I was going to love this (I like a good crossword). But in all honesty, I found it a little tedious. The production is slick, but it came across as a bit cheesy to me. I don’t know why, but I couldn’t help but think of the old J.R. Hartley Yellow Pages ad whilst watching it! I’m a def no on this one. For me, I was expecting a bit more humour and personality in the film, but it felt very flat.

Ivan—I think the issue is that the way it’s structured is that it’s voiceover sort of just blends together after awhile. It’s an easy film to tune out. Paul, do you feel strongly about it? You can always ping Jason and double check his thoughts.

Jason Sondhi—Ivan, your thoughts are my own, and why i didn’t put the film forward as “discovered”. If Rob is a definite “no” even though he’s a Brit, then let’s decline.

Paul—I think it is just too “respectful” of its subject… a bad choice of words I know, but I wish there was more life to it.

Thanks for submitting Dear Araucaria, and congratulations on its award up in Sheffield, and its Staff Pick over on Vimeo. We viewed your film with members of the team since you’ve submitted. The outcome of those viewings and discussions was that we felt this film was not one that we would look to run as a feature on Short of the Week.

Yours was a film we appreciated greatly on a technical level; it was very well-filmed, very professional throughout, with use of recreations, and generally a gentle sense of movement. Our challenge with it was that we did all find ourselves watching with a certain air of respectfulness, which was probably the goal, but that the solemn tone did rather take some of the personality and emotion out of it. As a tribute to the man himself, the film gave good time and pace to make that, and in this regard the film is effective. However, for the audience we have at Short of the Week, we felt it was perhaps too solemn to play well. We do have many character-focused documentary shorts, and we do look for those that not only tell a story but also draw the viewer in quickly and relate to common themes and bigger pictures.

It was not an easy decision for us to make since the quality of the film and the worthiness of the subject is evident. But it just didn’t feel like that tone would play well to a very diverse online audience who use a site where the vast majority of content is narrative-driven.

We do thank you for submitting, and for the even-handedness of your tribute piece. We do hope you will give us the opportunity to see more work from you in the future.

BAFTA-nominated director Samuel Abrahams, questions the status quo of online dating by challenging his newly single friend Tom, to find his next date—OFFLINE.

Rob Munday—Friends, SOTWers, countrymen, lend me your eyes! This submission came in and I need another opinion/opinions. The cynic in me feels it’s all a little too perfect to be “real” and I’m not sure if it’s even really a SOTW film, but there’s an underlying charm to that combined with some viral potentiality meant I felt obliged to share.

Paul Hunter—If it is a staged drama, then it is very well-acted and delivered to be super-natural and engaging.

If it is a documentary, then it stands out not only for discussing the new online dating world in an interesting way, but also for how well it captures the subjects and constructs the film.

Personally, I think it is a really well-done documentary (and the story behind how they got it so unobtrusive will be interesting), and if I saw it on SOTW, I would totally understand why.

Jason—Yeah, I love this both for its polish and virality. The ontological issues don’t bother me—very sharable, very conducive to conversation. It’s a film that will make people think about themselves and their friends and their lovers, and ultimately that kind of engagement with a film is a great thing!

Rob—Cool. We have a space in the calendar tomorrow, might try to get it live asap.

Rob—Thanks for the feedback folks—it helped a lot in the write-up.

Congratulations! Your film “OFFLINE DATING” has been selected for Short of the Week!

This was probably one of the easiest decisions we’ve had to make here at Short of the Week—your film feels innovative, engaging and emotive—basically everything we look for on Short of the Week. Obviously, as the film is live, we’d like to cover it as soon as possible, but we’d also like to get some background info on the film—please review our Filmmaker Launch Guide and fill in all of the required information.

I’ll likely have more specific questions, but for now, let’s start with these. Truly awesome work, we’re all very excited to be featuring this on Short of the Week.

The hardest thing to see is what is in front of your eyes.

Offline Dating has since gone on to connect with a massive online audience of 600,000!

Even a film that can seem obviously great in hindsight, is never that way at first. This is the art of great curation—to see greatness in something that no one else has seen or articulated yet.

It’s not until you’ve had to do this that you realize how much of your everyday taste in music, movies, and politics are shaped by the opinions of popular media, critics, and friends around you. When you strip those away, it can be a bit frightening—as if you are caught in a snow storm with no sense of what’s right in front of you.

Being a great curator comes back to trusting your taste and being ready to put it all on the line to find something genuinely new and exciting.

“But there are times when a critic truly risks something, and that is in the discovery and defense of the *new*. The world is often unkind to new talent, new creations. The new needs friends.”