BMW Films are back, and 14 years after setting the internet ablaze the seminal series The Hire will return with an all-new installment directed by Neill Blomkamp, titled The Escape. In advance of Sunday’s release of the newest film, this post looks back at the 8 original short branded films which were spread across 2 seasons.
Starring Clive Owen as the unnamed “Driver”, the films are rip-roaring action pieces featuring a bevy of name talent on both sides of the camera that, to this day, is unmatched by any ad campaign in history. Famous name directors like John Woo, Guy Ritchie and Tony Scott took part, as well as onscreen talent such as Madonna, Mickey Rourke, Don Cheadle and James Brown. Adding to the star power, David Fincher served as Anonymous Content’s “showrunner” for the series in season 1, before handing the reins to Ridley Scott and RSA for season 2.
With this much talent it is no mystery why the films caused a splash initially, but do they still hold up? Which are the best? And how do they compare to branded films in today’s media landscape? To start, let’s watch the films! The 8 short brand films are embedded below in a playlist ordered by release.

Ambush
with Tomas Milian
Directed by John Frankenheimer
Written by Andrew Kevin Walker
With the very first film, released April 26th, 2001, veteran filmmaker John Frankenheimer was tasked by with setting the stage—he delivers. The film is lean and economic from the get go, getting its exposition out of the way elegantly, and the measured choice of initial shots, along with the editing rhythm to the start of the film, are sublimely tension-filled. The film does great work in establishing the nature of the driver with lines such as, “The deal was, no questions asked”, and through The Driver’s inherent honorability in choosing to protect his charge. The cynic would say that the chase runs like a check list of car features: maneuverability, acceleration, braking, safety (when he backs up into the van), but, kudos for busting a taboo for car adverts, as this vehicle gets thrashed. And goddamn if this just isn’t great action filmmaking. Nothing less to be expected from Frankenheimer though who, with Ronin, already had one of the great car chases in cinematic history on his resume. Unfortunately this proved to be one of his last films as he passed away shortly thereafter from a stroke. While the action finale is a bit of ridiculous let-down, the closing scene where Owen asks about the diamonds is a great bit of character development for The Driver, showing off his charismatic, roguish charm. Both as a stand-alone piece, and, as a crucial introduction to the series as a whole, this is a success.
Chosen
Directed by Ang Lee
Written by David Carter
The format here is inherently a bit difficult for a director like Ang Lee who is more accustomed to quiet drama, but it’s more the material itself that marks this as a notch below the best outings in the series. The setup is lackluster as The Driver picks up a young Tibetan boy by the docks and immediately the chase is on. Lee’s handling of the car sequences though is quite interesting. Set to an eclectic, classical score, and employing more long shots than just about any other director in the series, the chase takes on a pleasing balletic choreography. The contrast of violence and beauty seems fitting, and honestly, almost funny. Tonally interesting, this is an enjoyable watch still.
The Follow
with Forest Whitaker, Mickey Rourke, and Adriana Lima
Directed by Wong Kar-wai
Written by Andrew Kevin Walker
This is the film that shows the true depth and malleability of the project, and is subsequently the most critically acclaimed installment, premiering at the Cannes Film Festival. I’m an unabashed fan of Wong Kar Wai, and, like in another branded work of his, There is Only One Sun, it’s amazing how his style so effortlessly adapts to commercial work. The film is unique in the series for a couple of reasons. Tasked with following the wife of a famous movie star, The Follow is the first to break the action format—no bad guys with guns here, and also by its decision to tell the the story through The Driver’s voiceover. This is no adrenalized-thriller, but instead a mournful, meditative affair. Shot by acclaimed DP Harry Savides, often utilizing WKW’s favorite technique of selectively framing his actors via foreground elements, the distant, but intimate connection of The Driver and his mark perfectly connects with WKW’s main cinematic preoccupations—isolation and longing in individuals as they make their way in an uncaring world. Owen was not a well-known actor at the time, having only recently had his breakthrough in Croupier, but this is when you knew he was a star. A true standout.
Star
with Madonna
Directed by Guy Ritchie
Written by Joe Sweet and Guy Ritchie
Guy Ritchie was riding high at the time of Star, coming off his successful transition to Hollywood with Snatch. After accepting this gig, he brought along his wife, Madonna, to act, playing a spoiled pop star who receives her comeuppance at the hands of our skilled Driver. Coming off her first #1 record in over decade, Madonna’s star power has made this one of the most well-remembered of The Hire shorts, which is a shame, as it is pretty bad. I won’t say Madonna is a poor actor categorically, but this is a dreadful performance, and the over-the-top feel and self-satisfied, winking humor of the piece has aged poorly. The driving sequences, utilizing a plethora of fish-eye closeups, has little elegance or ingenuity and feels the most like a car commercial of any film in the series. Adding to these drawbacks is the regrettable choice of music—Song 2 from Blur, which, while a fine track, was already played out at the time. It’s fascinating as a time capsule, but if there is any film to skip in the series, this would be my choice.
Powder Keg
with Stellan Skarsgård and Lois Smith
Directed by Alejandro González Iñárritu
Written by Alejandro González Iñárritu, Guillermo Arriaga and David Carter
This is an interesting one. The Driver finds himself in South America to rescue a war photographer injured while capturing images of a drug massacre. The cinematography by long-time Tarantino DP Robert Richardson is a wonderful example of a bygone era—unabashedly digital, with the tell-tale desaturated color palette. Richardson also employs the camera in a quick and dirty fashion—handheld with lots of closeups and zooms. Unfortunately that is probably the most intriguing aspect of the film. Iñárritu, who helped with the script, reaches for a sense of drama that he is unable obtain in the runtime, and in the process puts some clichéd dialogue into the mouths of Stellan Skarsgård and Owen. Worse, the film undermines the mystique of The Driver as he is chatty and less mysterious here, forced to emote in unearned ways while playing a more conventional hero-type. A fascinating approach to the project, and one of the clearest examples of the innovative, auteur-driven approach of the series, but ultimately a misfire. 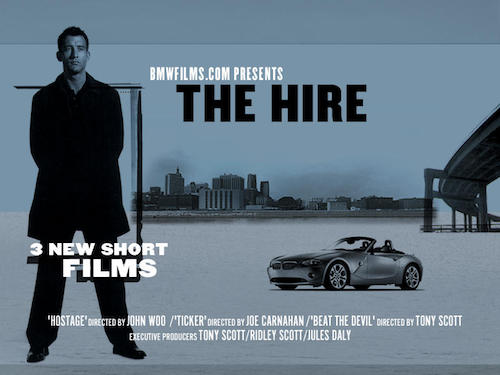