A Film About a Pudding

After Ronin neglects to clear up her dropped groceries, they start to mix and bubble, transforming into a small pudding - which begins to grow at an alarming rate
READ REVIEW
Next Previous

A Film About a Pudding 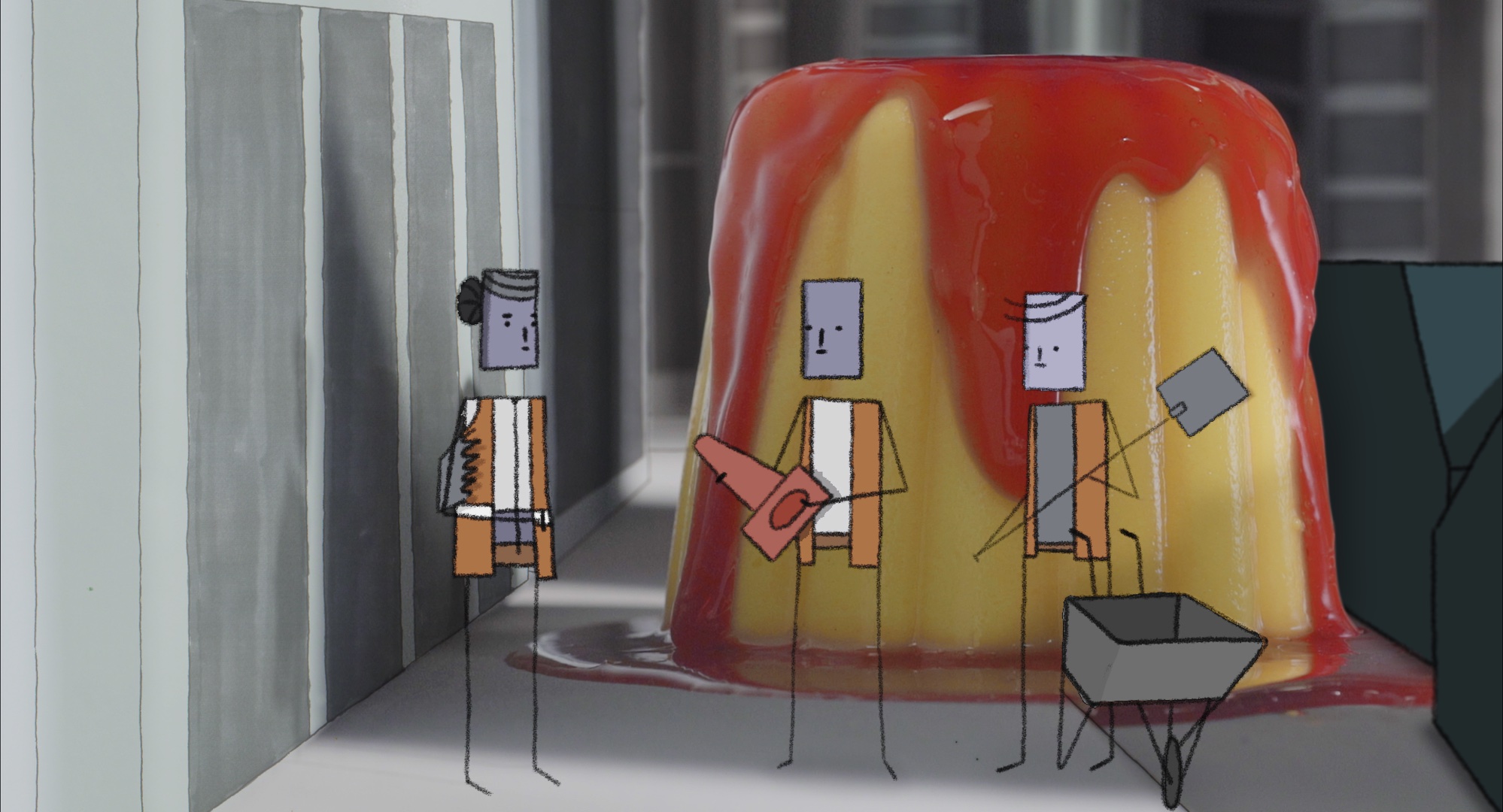 Responsibility is something you can’t escape. Whether it’s putting the bins out, caring for others or looking after the planet, we all have things we need to take care of. For Ronin, the protagonist in Roel van Beek’s NFTS grad film A Film About a Pudding, she tries to her hardest to ignore her own responsibilities, but it’s kind of tricky when they’ve grown into a giant dessert.

Set in a bustling metropolis, we’re introduced to A Film About a Pudding’s lead character as she exits her place of work (aptly named ‘Work Building’) and heads to the supermarket. Ignoring the bags for life on sale, she piles her ample shopping into a series of the flimsy free bags available at the checkout instead. The volume of the purchases results in her struggling to handle it all and on her way home she drops some of the food – eggs, milk, flour – on to the sidewalk. Faced with the dilemma of what to do now next, Ronin simply steps over the spillage and continues her journey.

If this sounds like a commonplace occurrence, what happens next certainly isn’t. As when she returns to the scene, on her way to work the next morning, she discovers that not only has the mess not been cleared up, it’s now morphed into a small pudding. Ronin obviously thinks this is strange, but like everyone else on their daily commute, she decides it isn’t her responsibility and once again simply hops over it. However, when she gets to her desk she finds it harder and harder to ignore and it doesn’t help that she can still see this newly formed dessert (which has now grown!) from her window. From here on out things escalate at a rapid pace as this wobbling, jam-topped treat threatens to take over the city and Ronin is forced into action.

Reading that description, if you haven’t already watched the short, the premise of A Film About a Pudding will surely sound a little frivolous or silly and in a way it is, but it comes from such a personal place for its director, that he obviously wanted it to land a real punch. “For a while I had been interested in the concept of ignoring responsibility and how it can lead to unforeseen consequences” van Beek explains. “It’s a behavioral quirk I noticed in myself and the people around me, it being the source of many of our bigger and smaller problems. For the film we wanted to see how far we could push this concept onto a character whose main characteristic is to ignore, and see when she would break. Naturally we ended up with her adversary being an ever growing pudding”. 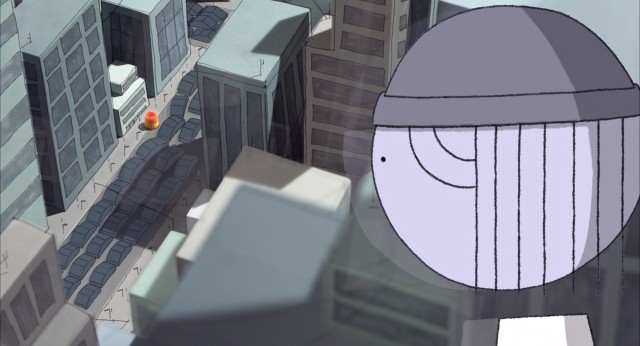 Ronin eyes the ever-expanding pudding from her office window.

It’s to van Beek’s credit that he really elevates the concept and turns it into a short with surprising depth and resonating impact. Despite the surreal nature of the story, it maintains a relatability throughout, something the filmmaker obviously had in mind during production. “We wanted to hold up a mirror up to our audience”, the director explains as we discuss the goals of his film. “We were aiming for people to recognize the tendency to ignore in themselves, and think of something they are ignoring at this very moment. We specifically keep the dilemma in the film abstract and absurd so the audience can interpret it in their own manner, it being on a personal or global scale. With acknowledging this behavior, and going as far as making a film about it, it has now gotten really difficult for me to ignore even the smallest issues. Hopefully the film has a similar reaction on our audience”.

Much like the narrative, at first glance the aesthetic of A Film About a Pudding appears quite basic, but like all good desserts, there’s a complexity under the surface, once you dig in. A mixture of digital 2d animation (for the characters, vehicles and many of the everyday objects) and miniature set photography (the cityscape is built out of foam blocks), the real masterstroke in the visuals here is the casting of a real-life pudding as the “villain” of the piece. There’s an indication of what’s coming when you realise the eggs, flour and milk Ronin drops are all actual food items, but still, the first time you see that gelatinous treat in the film it spreads an infectious grin across your face. As it grows (the puddings were made by 3d printing three different size molds), the scale of it compared to the buildings and the every day life occurring around it makes for a wonderful contrast. I guess in a way you could almost call A Film About a Pudding a monster movie, it’s just that the colossus overtaking a city in this story looks delicious.

While shooting this way was certainly effective (you can’t imagine A Film About a Pudding being as successful if it starred CGI desserts), it also came with its fair share of challenges. Fridges had to be kept stocked with those real-life puddings and buckets were overflowing with fake syrup and this was only the start of the hard work. “After the set photography, we physically printed each shot on paper to then hand draw detailing over it” van Beek explains. “We drew windows, doors, streetlights and a whole bunch of wires. With the backgrounds scanned back into the computer, we then composited the 2d animation on top of it”. The accompanying audio is also a key element in the success of the short, with composer Madison Willing and sound designer Henry Sims doing excellent work in making this world feel tangible and increasing the tension of the sticky situation. As mentioned earlier, A Film About a Pudding would be easy to dismiss as just a bit of fun, but there are numerous layers to both the story and style that make it much more than that – also, who doesn’t love a good pudding?

For van Beek, with a A Film About a Pudding having been served to hungry festival audiences at Annecy, BFI London and more, we’re eager to see if internet viewers share the same appetite for its dessert-based metaphor. In the meantime, the director is already working on a new short, which he explains is “about a kitchen timer predicting the end of existence”.