Growth goes hand-in-hand with rivalry, and evolution with competition, in this shocking animated duel that’s peppered with allusions to the western film, the Cold War, board games, and much more.
READ REVIEW
Next Previous 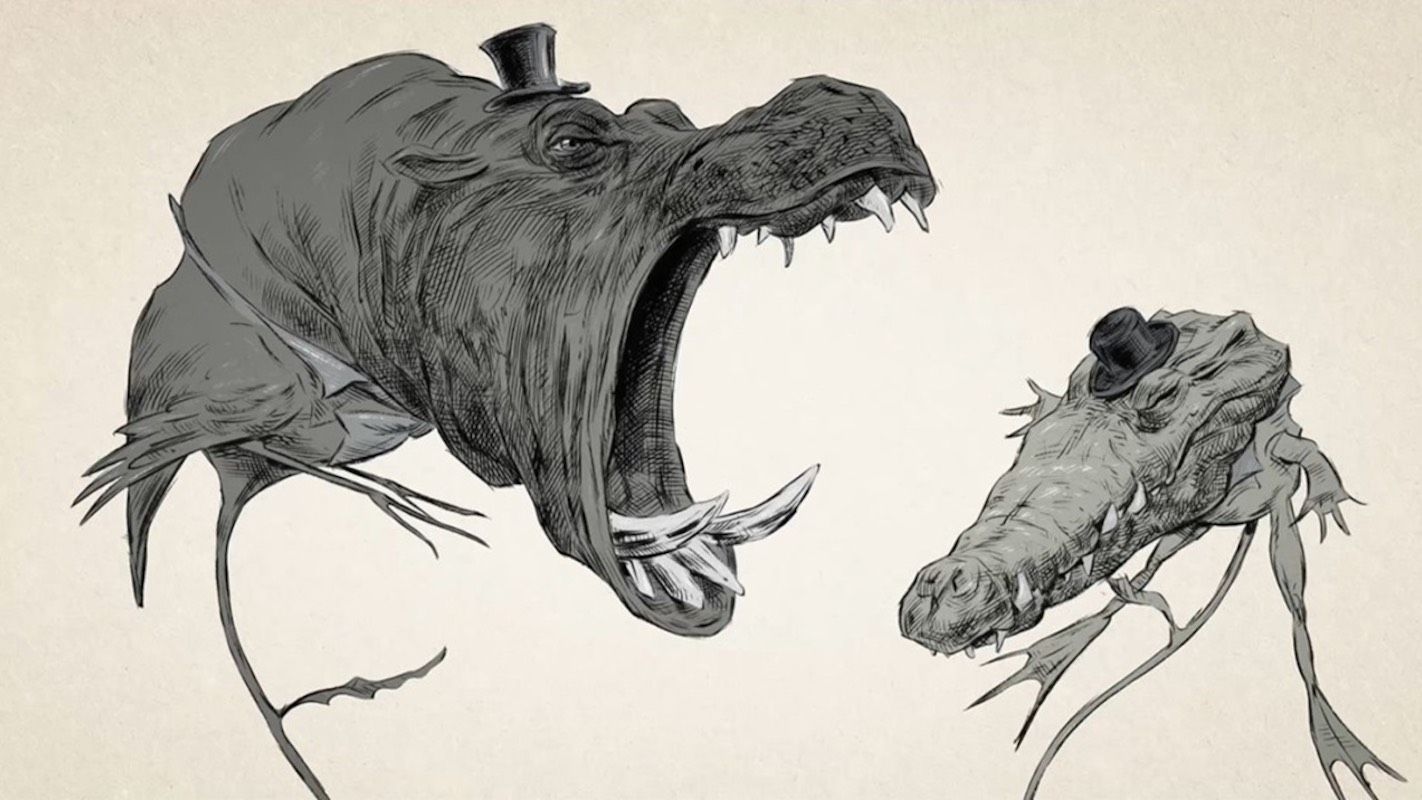 The term “bad seed” has become a phrase used to describe a person who is dishonest, evil, or unprincipled by nature and these are very much the principles explored in Claude Cloutier’s six-minute fable Mauvaises Herbes (Bad Seeds). A hand-drawn animation that details the battle for supremacy between two very unusual carnivorous plants, this universal tale has impressed audiences young and old on its festival tour and now finds itself on the shortlist for the Best Animated Short Film Oscar.

Both incredibly simple and rich with detail, Bad Seeds opens with a pan through a surreal landscape where lemons, acorns, baseballs and roasted chickens grow side-by-side in the vegetation. As a carnivorous plant rises from the undergrowth, we soon begin to understand that it is the evolution of this ravenous flower that will be the focus of Cloutier’s film. As it feeds on passing flies and grows a rather fetching top hat, the conflict of the story is introduced when a second plant springs to life and the pair begin to battle over their common food source.

A tale of greed and competition, if the above description doesn’t sound surreal enough, Bad Seeds gets even stranger as the plants evolve through a number of phases including bird, frog, humpty dumpty, Hitler, Stalin, gun and hammer. With Cloutier revealing, in this interview with Ben Mitchell on Skwigly, that he’s always been drawn to the fable/fairytale approach as he believes it’s “the kind of condensed story that lends itself well to animation”, it’ll come as no surprise that Bad Seeds is full of humour, but carries a strong message.

As the battling plants morph into two fierce dinosaurs, this isn’t even the weirdest transformation they undertake.

As I mentioned in my intro, it’s the universality of the storytelling here that impresses me so much, with the sentiment and humour of the piece working whatever your age or background. Having watched Bad Seeds with both a festival audience and with my two young children (I can safely say they’re the harder of those two audiences to please) it’s amazing how the laughs came at the same points and the message of the piece hit home with both. Though the older viewers will surely read a lot more into the deeper message of the short, my boys found the physical comedy hilarious and my four-year-old son even took something away from the film, explaining that if they would have followed the “sharing is caring” principle they wouldn’t now be dead (apologies – kids don’t understand spoilers!).

Complimenting his simple but effective storyline with an equally minimalist aesthetic, Cloutier employs hand-drawn animation (scanned and coloured on computer) to bring his narrative to life. Explaining (again in that interview with Mitchell on Skwigly) that he hopes the “handmade nature is palpable”, the filmmaker reveals that his biggest challenge “was to tell a story using as few elements as possible: a minimal number of characters, few colours, no backgrounds… all with the goal of focusing attention on the action and the drawing”. His considered approach is certainly fruitful here, as underscored with a light-hearted banjo/violin soundtrack and some elastic sound design, Bad Seeds is a ton of fun and exactly what we all need at the end of a testing 2021.