Stray Dogs Come Out at Night

In Karachi, a young street-masseur cannot come to terms with his illness. He convinces his uncle to take a day trip to the beach, desperate for respite. The Arabian sea beckons.
READ REVIEW
Next Previous

Stray Dogs Come Out at Night

Inspired by the real-life stories of masseurs on the streets of Pakistan, Stray Dogs Come Out at Night transports its audience to the hustle and bustle of Karachi as we come face to face with a young man who finds himself in a desperate situation. Described by creator Hamza Bangash as “a revolt against toxic masculinity”, this 11-minute short may centre around some very specific circumstances but has universal appeal through its focus on life, death and everything in between.

Introducing us to its protagonist, Iqbal (Mohammad Ali Hashmi), late at night as he sits beneath a lamp post cautiously eying the cars that drive past, you’re instantly intrigued by the scenario, eager to find out why this scene is important. As the film expands, we begin to understand his predicament – through evasive phone conversations with his family and discussions with his roommate (and uncle) Khurrum (Adnan Shah) – that the streets are his place of his work and Iqbal is sick because of it. 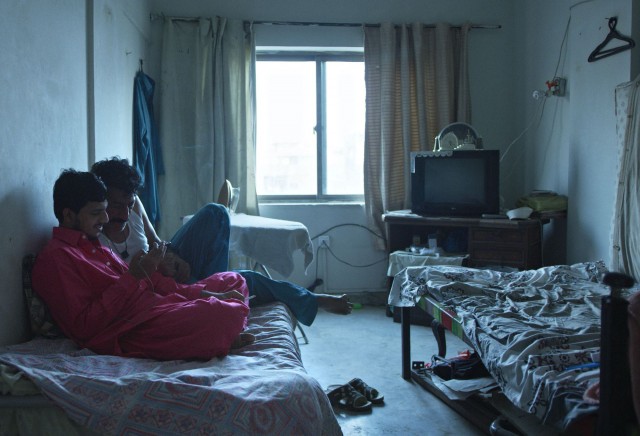 Essentially a two-hander between Hashmi and Shah, with a few bit-part players (the camel the real standout), Stray Dogs Come Out at Night was partly inspired (along with those aforementioned real-life stories) by Bangash’s own experiences of moving to Karachi. Experiencing feelings of “isolation and smallness”, the filmmaker describes his time in the Pakistan metropolis as being “another body in a migrant city”.

With one of his aims to capture the “vastness of the urban sprawl” in his short, Bangash certainly succeeds in this department, with Karachi almost feeling like a third character in the narrative. However, where the film really succeeds is in its depiction of Pakistani life not often captured on-screen, as the director explains, when we quizzed him on what he hoped to achieve with Stray Dogs Come Out at Night:

“I wanted to create a film that speaks to the intersection of capitalism and unspoken sexuality. Pakistan, as a hyper-masculine and sexually-repressed society that exploits the bodies of its young population. Set in the subculture of street masseurs, who are visible on every corner past sunset, the film speaks to the human cost of feeding secret desires”.

Visually, Bangash’s short isn’t doing anything new, the production adopting an almost documentary feel, utilising natural light and handheld camerawork. I don’t point this out to diminish the filmmaking here, if anything it feels like a positive, as you really couldn’t imagine the short shot any other way. It needs that gritty, raw approach to amplify the authenticity of the story and make you really invest in the characters and their situation. This is empathetic filmmaking and it really lands its impact.

Stray Dogs Come Out at Night was Bangash’s second film as director, after 2018 short Dia. He has since shot two new shorts, 1978 and Bhai (which we’ll also feature on Short of the Week later this month) and is now working on his debut feature, a feminist-horror set in Karachi.