Anna and Tom meet with a priest to plan their wedding.
READ REVIEW
Next Previous 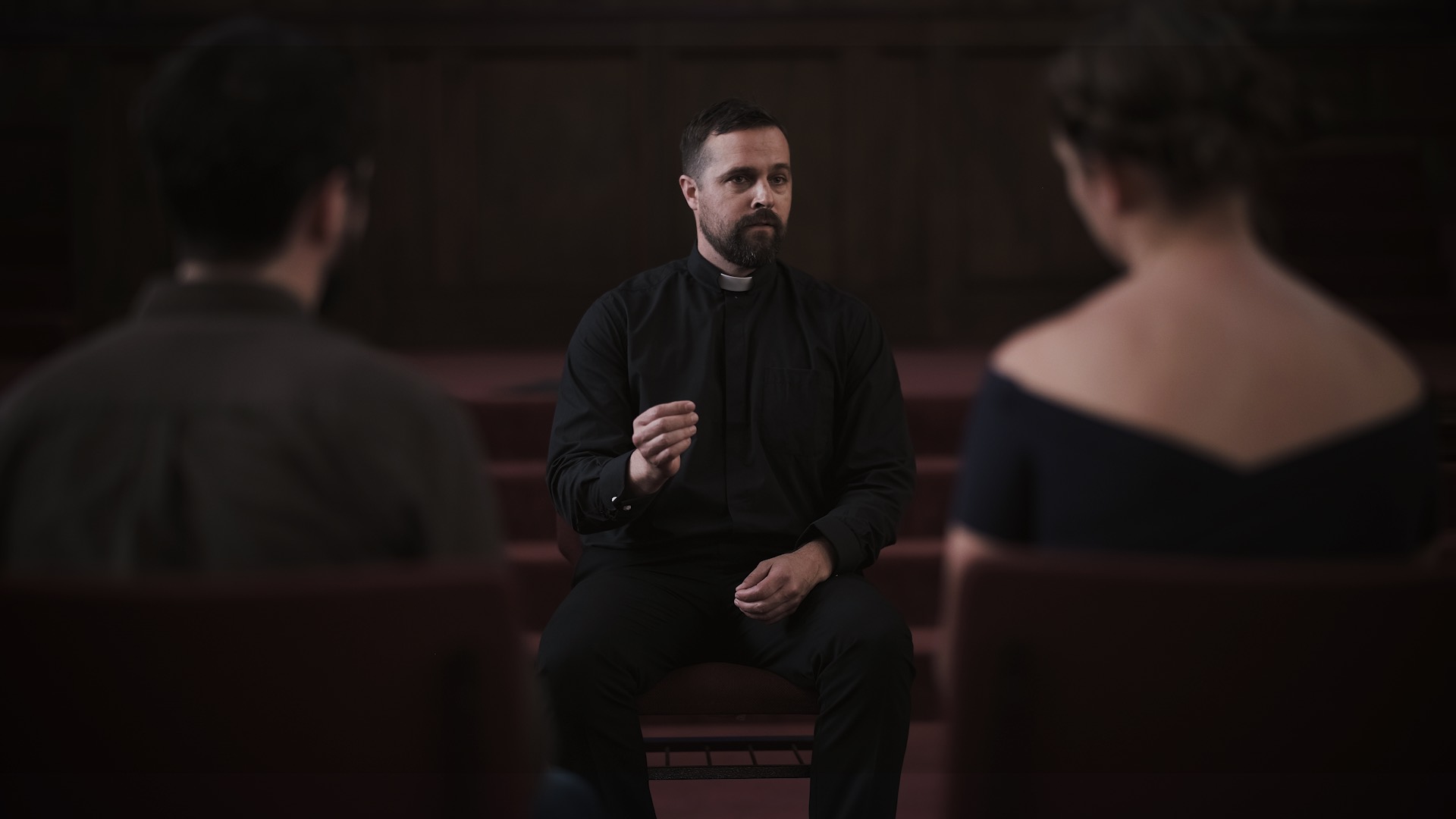 Crafting a “simple” short is harder than it looks. All the typical low budget indie ingredients—a single location, a handful of actors, a dialogue-driven narrative—need to be utilized in just the right way in order to make something where the scrappy simplicity doesn’t undermine the entertainment or emotional impact. It’s, ultimately, the perfect creative challenge: sometimes limitations can yield the best results.

Together is the third film I’ve screened over the past few months from director Brett Cramer starring actor Meg Cashel. All serve as proof that this creative duo has just sort of “figured it out” when it comes to crafting smart, small-scale low budget short-shorts. They present immediately engaging, character-driven premises that quickly spiral out of control, leaning into comedy but always finding a way back to emotional resonance. 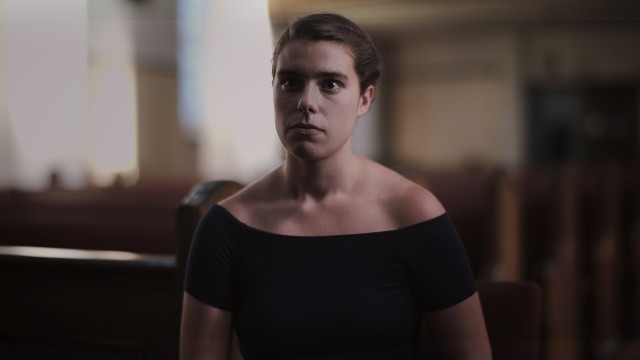 Meg Cashel as Anna, the bride-to-be having a hard time lying to a priest

Partially the success here hinges purely on Cashel (who is also a co-writer on this project). She’s terrific and just incredibly good at handling neurotic comedic escalation—a sort of nervous rambling that starts small and quickly manages to touch upon deeper things as the words keep flowing. She goes big but never bombastic, and so, there is always a relatable vulnerability even when things are at their most awkward and comedic.

Cramer also deserves a lot of credit for steering the ship. It’s a visually simple film, yes, but as he mentions in his No Film School article for previous S/W pick It’s Been Awhile, he puts a lot of thought into the craft of these projects, figuring out ways to use simple tools for peak efficacy. This comes down to smart lens choices and strong compositions, as well as a clear focus on pacing and timing in the edit. For a film that is literally just three people sitting in one place, it never feels boring, and that in and of itself, is an accomplishment.

Beyond technical execution, for Together specifically, I like how the film uses the underlying comedic premise (a couple feigning piety in order to get “permission” to get married in a Catholic Church) to touch upon broader ideas about trust and belief in a relationship. As a Jew who married a Jew, I had it easy in this regard: my wife and I had a Jewish wedding and everyone’s bubbe was happy. 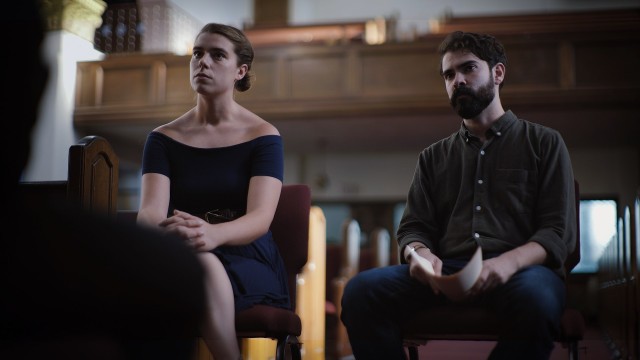 Meg Cashel (L) with Together co-star Tyler Bremer, as the short’s central couple

This gets more complicated in “mixed belief” relationships and starts to probe at the actual importance of faith in one’s life. Is one religious for the optics of it? How much of what we do…how many choices are made…simply to avoid confrontation? Across its six minutes, Together probes a variety of things (my favorite tangent being about sexual agency and a woman’s control of her own body in relationship with Catholic dogma). Ultimately, though, the film is about people close to one another not actually talking with each other—that living with the aim to please someone else can, ultimately, metastasize into something malignant.

As Cramer relates to Short of the Week:

“I’m interested in the lengths some people will go to satisfy their partners –– even at the expense of their own happiness –– and how those well-intentioned choices can snowball into something damaging if left unchecked…We were hoping to achieve a truthful and nuanced snapshot of a rushed relationship, where failure stems mostly from good intentions instead of spite or toxicity.”

I mentioned it in my feature of It’s Been Awhile, but it’s worth noting again: I like how Cramer has been making shorts in quarantine without explicitly making “quarantine” shorts (he has more in the works). Again, this goes back to utilizing simple resources to peak efficacy in respect of the limitations of shooting during a global pandemic (Together was shot with just 6 cast and crew members), but it also shines a light on how uninteresting I have found most “pandemic films.”

I could give a lick about dumb jokes focused on mask-wearing and Zoom calls: it’s my life right now, I don’t want to be reminded of it in the entertainment I watch. Moreover, I think making a film specifically about Coronavirus sort of limits its eventual efficacy. After all, there will be a time when we can take our masks off and go into the world again. So, it seems smart to be telling human relationship stories that will stay resonate long after “social distancing” becomes a choice, not a public health requirement.