Experience a ground-level view of the Hong Kong pro-democracy protests in this Oscar-nominated short from Field of Vision. Visceral and pulse-pounding, Anders Hammer provides unprecedented access to the participants as they fight against the mainland Chinese government—actions spurred by the passage of a new Beijing-backed national security law.
READ REVIEW
Next Previous 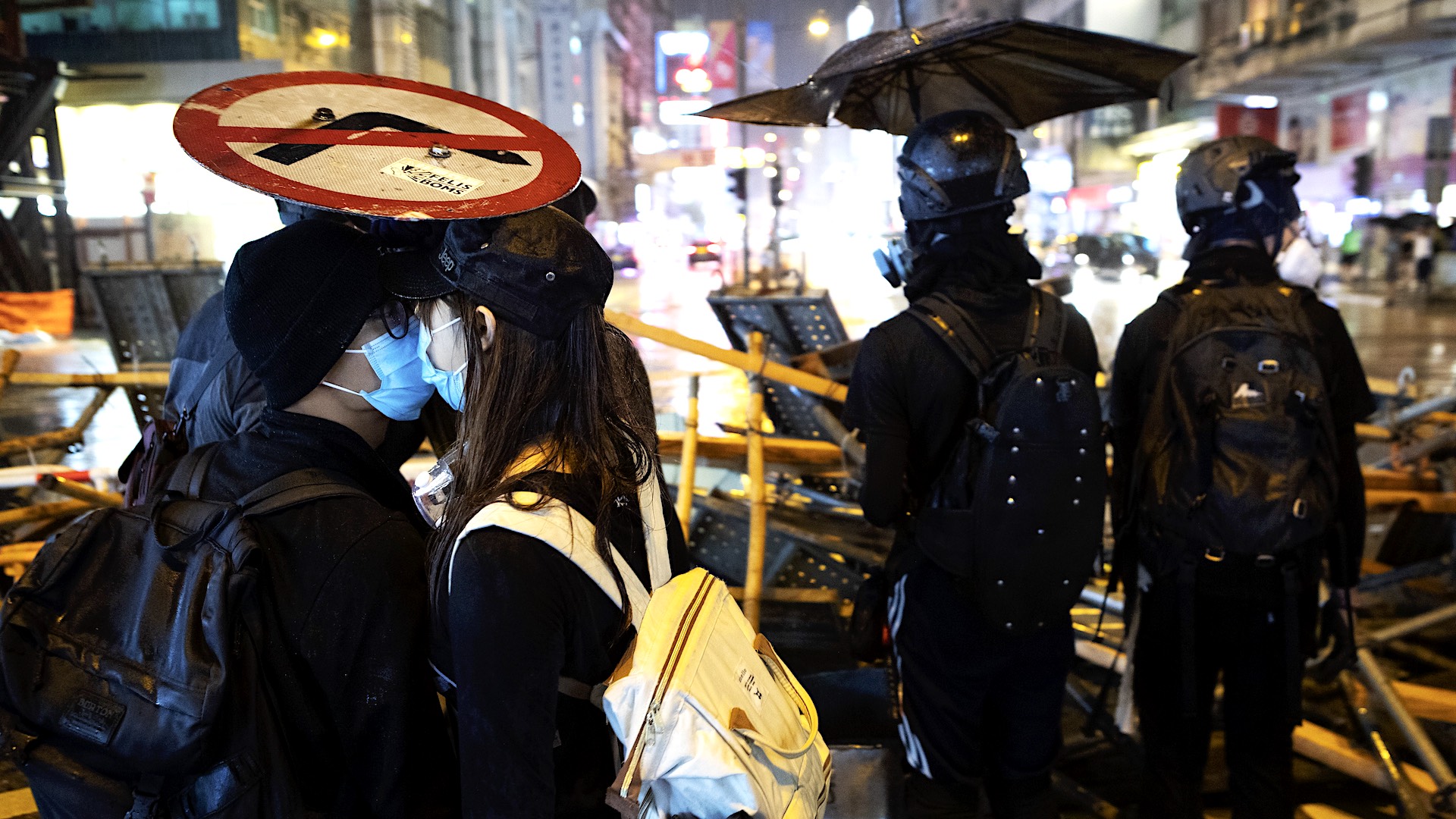 Within its first minute, the aim and appeal of Anders Hammer’s documentary short, Do Not Split, is made clear. Racing with a camera behind a man with a shopping cart, a group of masked individuals huddle up. Blaring sirens emerge at the intersection down the street and the group quickly scampers down side streets and alleys. They emerge in front of a shuttered bank storefront, briefly flummoxed on how to lift the gate. No worries, a tap on the glass from the inside beckons them to the side door. Alarms blaring, they are in. Fluid is poured on the ground, a lighter flicks, and flames rise. It is October 2019 in Hong Kong and we’re riding alongside the front lines of an explosive protest.

Like many individuals that spend too much time on Twitter, I was captivated by videos on my feed that emerged from Hong Kong Polytechnic in November of 2019, where the most dramatic of scenarios from the long-brewing Hong Kong protests was playing out in real-time. I could barely believe what I was seeing, as students had barricaded themselves within the University and were fending off a massive show of force from authorities using obstructions and firebombs. They were trapped, with no avenue of escape, and the potential for tragedy appeared high. If the documentation of this event, told via citizen reporting on cell phones, felt dramatic at the time, the cinematic presentation of events in Do Not Split will blow your mind. Hammer, a Norwegian filmmaker and a veteran of embedded filmmaking in hotspots like Afghanistan and Syria, plants himself and his Canon X Mark II squarely in the midst of the action. The siege of Polytechnic plays a prominent part in the film, but it is just one of many scenes that exhibit remarkable bravery in the face of great risk in order to grant access to one of the most urgent and innovative protest movements of our time. 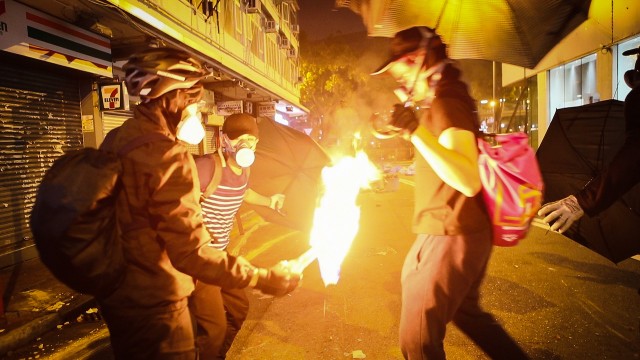 Should the origins of Hong Kong’s protest movement or the history of the island’s relationship with the Chinese mainland in the wake of the 1997 handover from British control be unfamiliar to you, the good news is that you need very little context before diving into Do Not Split. For a film that favors raw immediacy and largely forgoes the kind of expert interviews that ordinarily would construct a film’s “narrative”, Do Not Split is a rather good summation of the historical record. The length of the team’s commitment (reportedly 140 shooting days over the course of a year), allows the film to be mostly presented in a linear fashion and track developments in roughly chronological order. Subtextual clues on the progression of the movement are evident in the video footage, while simple text interludes provide updates on political developments. History itself thus provides the “arc” of the film, so though it is clear where Hammer’s sympathies lie, he and his editors, Mark Lukenbill and Bill Ross IV, are largely freed from the responsibility of editorializing via structure, favoring a “bearing witness” approach. Hammer summarizes this simply, telling us, “The idea has been to direct a documentary that makes the viewers feel they are on the ground, seeing what the camera sees from the experience of the people, as closely as possible. I did this by following the protesters as close as possible.”

Filming in a fly-on-the-wall manner does have its drawbacks over a 35min runtime. The sensational footage aside, the aforementioned light-touch in narrative construction, paired with the need to protect the anonymity of key participants, can make the film feel like a river of documentation—easy to get swept up in, but with no mooring or harbor to latch upon within that flow. While its pace and astonishing footage, accompanied by a nervy synth-score, get the adrenaline pumping and often make Do Not Split feel more like a dramatic thriller rather than a documentary, there is a certain coldness and remove to the film that is ironic given the remarkable degree to which Hammer embedded himself in the action.

However, the relative lack of key characters to emotionally invest in befits the nature of a decentralized “headless” movement, and Hammer’s story-telling approach also lends real advantages to a project where developments are evolving in real-time. The current film, the one that we’re sharing and which is in the running for an Oscar statuette on April 25th, is a full 15min longer than the version we first encountered in January 2020 at the Sundance Film Festival. Hammer and his team have updated it to include 2020 and the massive curveball that is Covid-19. Unfortunately, the ramifications of these new developments were profound—lockdowns and the understandable reticence of the protestors to mass together in the midst of a pandemic stopped the momentum of the movement in its tracks. Relieved of this massive pressure, mainland authorities had a free hand to enact even more stringent crackdowns in July 2020 and a sweep of arrests this January confirmed the worst fears of protestors. While the movement was seen from the beginning seen as a longshot, David vs. Goliath undertaking, the tone of Do Not Split is much changed between the two cuts, as there is now a palpable feeling of despair and an elegiac tinge to the film’s denouement. Activist Joey Siu, the most visible of the film’s on-screen subjects, is featured prominently in the new footage, and she decamped to the United States this past Fall in order to continue her work from abroad. 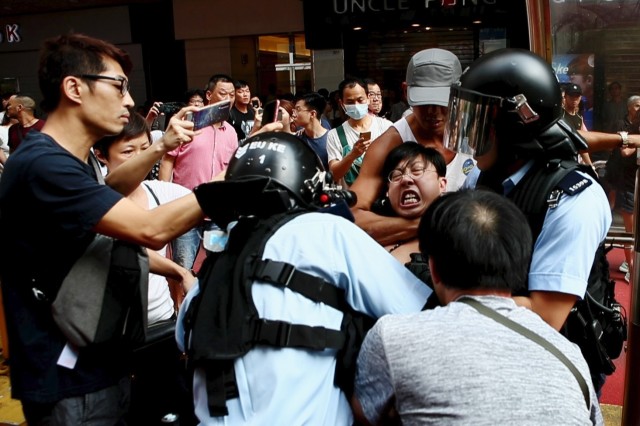 This pall extends to Hammer himself. In a recent piece in Deadline, he remarks that his feelings regarding the Oscar nomination of Do Not Split are subdued, noting, “I feel really sad about the situation in Hong Kong now. Of course, I was happy for our movie being nominated, but I was not dancing and cheering. Maybe I would have if it was a fictional movie…To put it short, it was a day of mixed feelings.” However, Hammer’s stated goal with the film is to spur viewers to contribute in putting pressure on their governments to “stop turning a blind eye to how China is suppressing basic human rights.” In light of those aims, Oscar is an unalloyed good, providing quite a platform for Hammer to promote awareness. He has been making frequent appearances in the press in recent weeks, which you can track via his Facebook page. This mainstream interest is partly due to the nomination, but also in large part due to the ramifications of said nomination. China has taken steps in the past month to censor mention of the awards on their social media platforms, and for the first time in 50 years the Oscars will not screen live on Chinese television—actions that are popularly attributed to the presence of Do Not Split and the potential embarrassment the Chinese government will perceive should the film win.

Risking China’s wrath is a bold step for the Academy, and though the nominations don’t emerge in a centralized top-down manner, it is still a surprise to see Do Not Split recognized due to the film industry’s increasing reliance on Chinese markets. Teasing out the strands of this story is beyond my purview here, but I imagine there are many in the industry that are unhappy about this development, so it is heartening to know the film team has its producer, Field of Vision, in its corner. Covered frequently on this site, Field of Vision has, in a few short years, become a powerhouse in the Documentary discipline, and its unflinching commitment to journalistic values and ethics, where speaking “truth to power” is a sacred principle, bode well for the project’s ability to weather any blowback.

Politics aside, the Oscar nomination is welcome validation for the film and a testament to its quality. While films shot within social movements have become a burgeoning subgenre in recent years, it is difficult for us to recall any examples that achieve the same sense of immersion as Do Not Split. The enormity of the project’s undertaking, and its execution, are both a match with the urgency of its subject. If the resignation felt by the Hong Kong citizens on display in the current version of the film is distressing, it is all the more reason to watch and share this vital work, with the hope that Hammer might yet return to Hong Kong and future revisions can paint an emergent future that is more optimistic.