The act of transporting an old mattress into a new walk-up apartment becomes absurdist, cinematic one-woman choreography in this nearly wordless vignette from Adinah Dancyger, full of humor and pathos, and painfully familiar to city-dwellers.
READ REVIEW
Next Previous 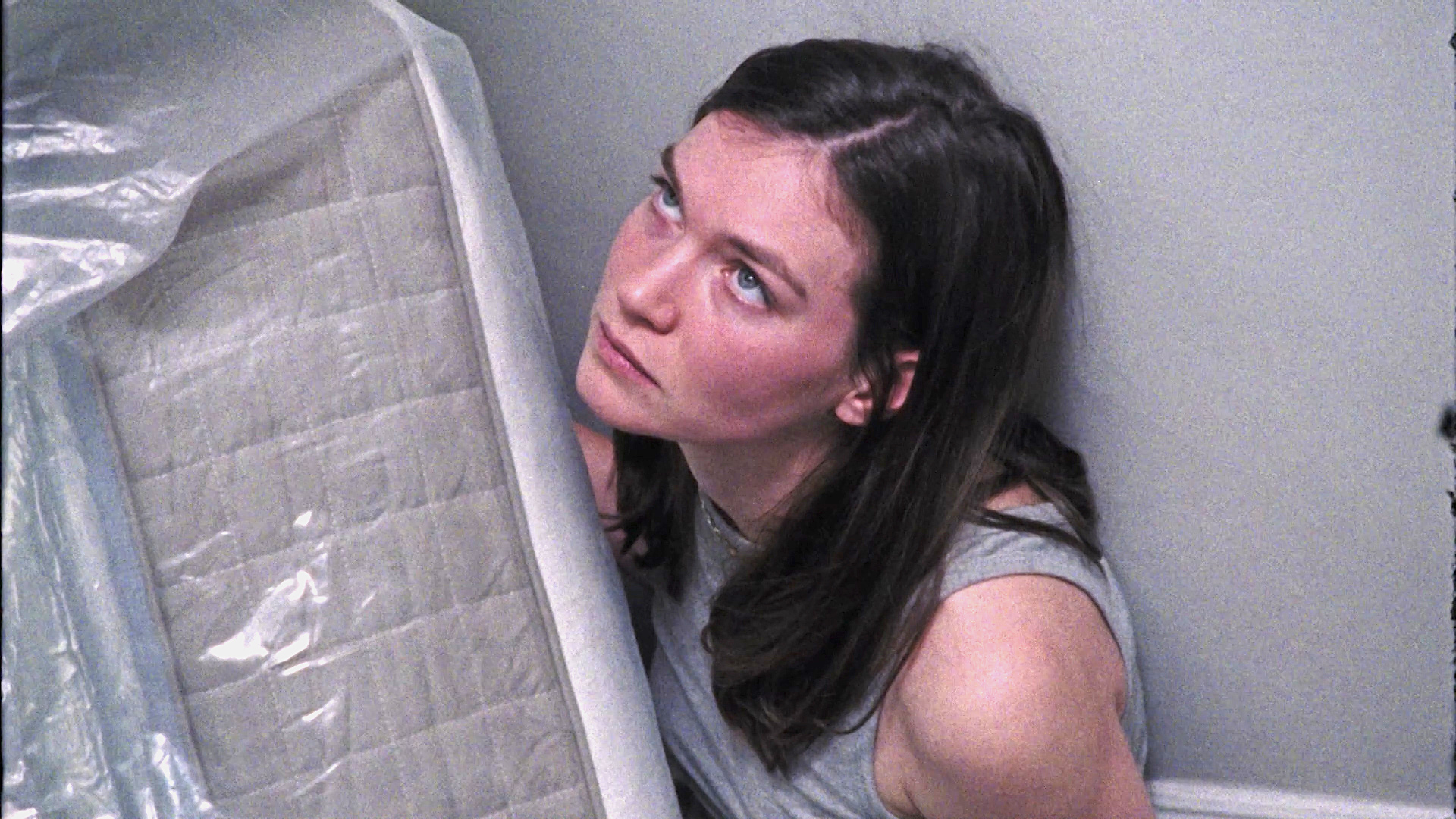 It’s an approach that is only possible in shorts, and one which I love when done well—how much can you leave out and still have a film “work”? How simple can the plot be, how mundane the action, how withholding can you be of context or exposition, yet still produce a piece that is compelling to audiences?

That is the challenge Adinah Dancyger (Cheer Up Baby) set herself in MOVING, her Slamdance Grand Jury Winning short that recently premiered online. Based on a personal experience of changing apartments in NYC, the “text” of the film is utterly straightforward and unremarkable, buoyed only by its mildly absurdist comi-tragic centerpiece where a woman does battle with a mattress. Yet, in its depiction of this woman’s lone struggle, Dancyger has crafted a film that approaches allegorical profundity. Via artful direction, calibrated pacing, and a dynamite performance from its lead, Hannah Gross, MOVING invokes a subtextual universe that it invites audiences to fill. The film withholds so much of what we normally associate with solid storytelling, but that absence creates space for everything else, from, as Dancyger suggests, “a meditation on the simplicity of pure emotion” to nothing less than an anthemic, late-capitalist howl for a generation of disaffected Millenial city-dwellers.

“I wanted to marry this hyper specific, mundane scenario with the vast space of interpretation.”

The trick for “simple” films like MOVING is a curatorial sense for populating the screen with the sorts of signifiers that fill in the gaps left by the absence of explicit plot and dialogue. As with so many films set here, NYC is a character in the film, producing a richness of detail that, paired with the 16mm photography, immediately establishes a sense of place and evokes a long cinematic history of outsider figures on the margins. There is a dingy aspect to it all, from the alley in which our lead sneaks a pee break, to the bland sedan she drives, all of which is compounded by the gray of the winter landscape. While the radio program in the background that discusses the challenges of the NYC rental market is unnecessarily blunt, other touches are inspired—the plaque in the lobby of the new building that declares it is part of the Dept. of Marine and Aviation (a sign of how any and all usable space has been co-opted by the housing market), or the quick cameo by the chief documenter of weird New York, John Wilson, as a vaper puffing huge clouds as he walks down the street.

Jump Cuts are used liberally by Dancyger to both quicken the pace of the action, but also to evoke the anxious, edgy state of mind of the lead. The heart of the film’s subtextual appeal is Gross’ performance, as Dancyger employs frequent close-ups to showcase minor variations of mood throughout the film. “The physical manifestation of turmoil/catharsis is something I find so interesting”, Dancyger tells us, and Gross’ performance embodies this aim, as she shifts from annoyance to despair to solemn perseverance throughout the short, eight-minute runtime.

The simplicity of the premise leads to relatability, as I’m sure many of you can empathize with the scenario Gross’ character goes through, having encountered something similar. Some will find comedy in it—Dancyger mentions that “when I told the story to friends they thought it was the funniest, saddest thing they ever heard but it took me a long time to find the humor in it.” I fall in with Dancyger’s initial sentiment. Perhaps it is because, with the pandemic, I’ve been reading too many articles of the “breaking up with NYC” genre, or that I recently read Ling Ma’s post-apocalyptic novel, Severance, but an exasperated critique of American urban life rang most clearly to me.  As a millennial, contemporary themes of loneliness, anxiety, and the precarity of modern living screamed at me from off the screen, which is a neat trick for a film that is ostensibly about a woman with a mattress stuck in a stairwell. As Dancyger notes, “I loved the idea of a story that embodies tears and laughter and that the film could have everything and nothing to do with the premise.”