L'Heure de L'Ours (And Then The Bear)

** CURRENTLY OFFLINE** - That very night, houses will burn. Men and women will tremble. Hordes of children will come together and howl as they dance alone on the ashes like wild bears. It only takes one cry to awaken them all from their slumber!
READ REVIEW
Next Previous

L'Heure de L'Ours (And Then The Bear) 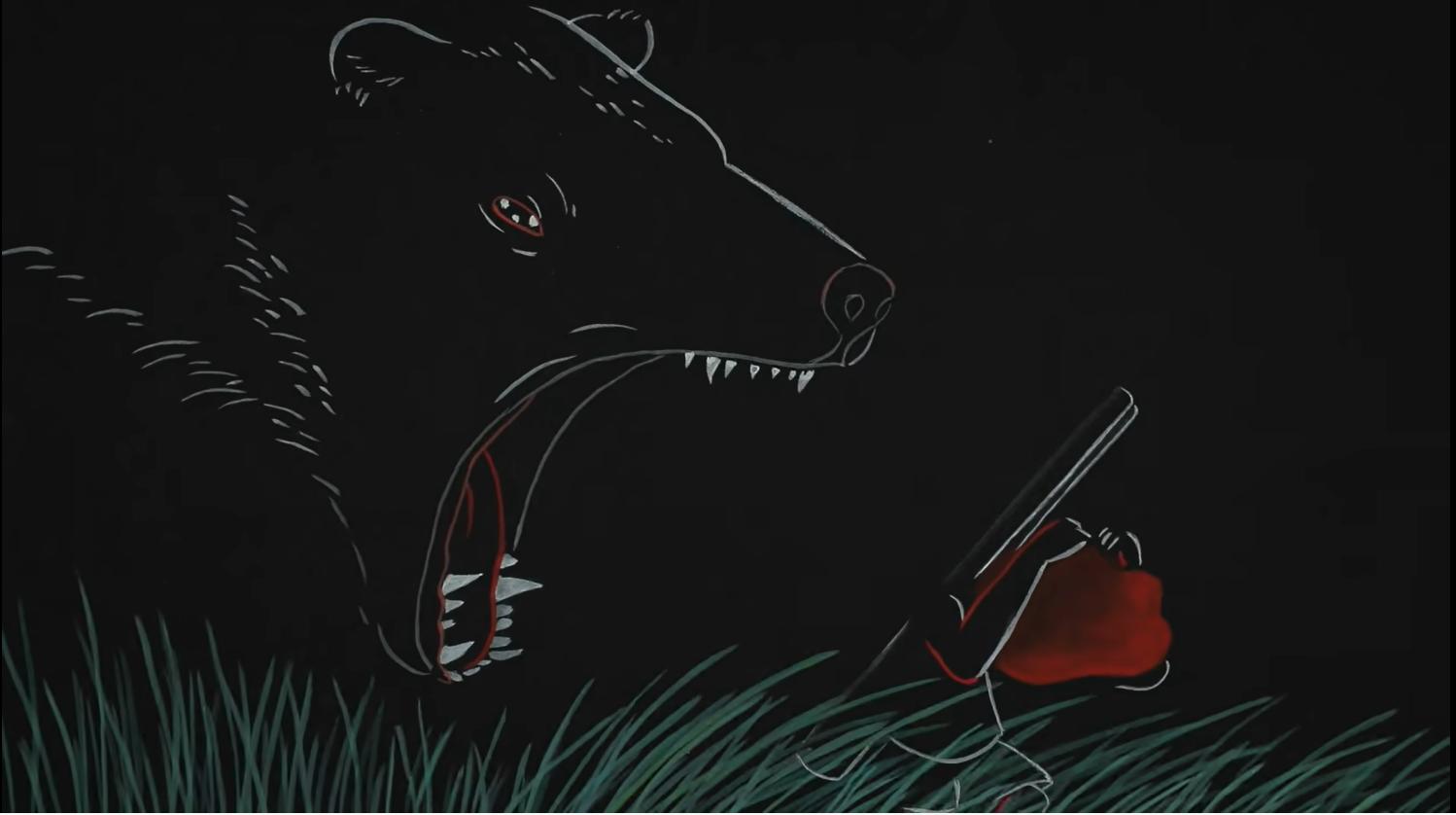 If you’re a regular festival go-er, there’s a good chance you would have already seen today’s pick L’Heure de L’Ours (And Then The Bear). Having played programmes worldwide since 2019, Agnès Patron’s 14-minute short picked-up awards at Aspen and Valencia and nominations at Cannes and TIFF. For those of you new to Patron’s exquisite animation – prepare yourself for one of the most atmospheric, captivating films we’ve featured on S/W.

Opening with a scene where a young child playfully journeys through the swaying long grass, making his way to a woman on a porch (presumably his mother), there’s something in the silence of that scene (punctuated only by the chirp of crickets and the occasional gust of wind) that instantly sets the viewers on edge. As the boy is wrapped in a loving embrace, the peaceful nature of their surroundings is soon disturbed by the roaring engine of an approaching car.

With the car’s noisy arrival heralding the appearance of the woman’s lover – decorated in cowboy boots and hat, a cigarette attached to his featureless face – we soon begin to understand that his presence brings with it a sudden change in tone. With this the film takes on a darker turn, the boy’s appearance and demeanour quickly changing as he’s cast aside and after he’s writhed on the floor, surrounded by the tall grass, we cut to a shot of a village aflame. 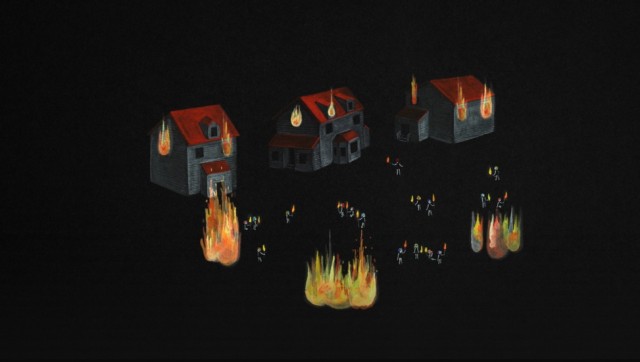 The images of a child on the back of a bear and of a village burning were inspirational in the origins of And Then The Bear.

From here on out, that relatively grounded opening is replaced with a more fantastical, dreamlike state as our young protagonist’s hurt at now feeling abandoned (and having witnessed his mother having sex), leads him to find an outlet for his rage and seek comfort in his anger. A confrontation with the other man in his mother’s life leads to that rage boiling over and as the short enters a trance-like rhythm in its final third, we’re left to contemplate all we’ve seen, the events reverberating like the bang from a gun.

Though there’s a rough narrative thread to follow in And Then The Bear, it would be fair to say Patron’s film is somewhat difficult to decipher. Narrative themes – childhood, innocence, abandon, revolt – can be plucked from its freewheeling storyline, but the director herself admits the film was built around images (“…of a child and a bear, of fires burning villages”)  and is “more about sensations” and “snatches of memories”, than more conventional storytelling. 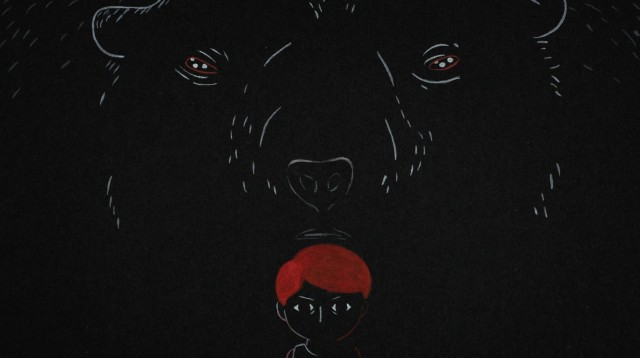 The film’s tone and feel changes with the appearance of those giant bears.

“Sensations” feels like an apt word here, as although you don’t necessarily form any strong bonds with the film’s characters, And Then The Bear is still packed full of emotion, with anger playing a major role. “I gave birth to a boy. He grew up and helped inspire the script. He got to an age where he had some big angry outbursts. It was impressive. And I too was angry about certain subjects where I was treated like a child. I wanted to provide justice to this childish anger that can inhabit us, even as adults” – Patron reveals in an interview at the Clermont-Ferrand International Short Film Festival.

However you decipher the film and decide what you want to take from it, the director just hopes that viewers will reflect on a feeling that “something wild, precious and beautiful remains inside them”. And Then The Bear is Patron’s third short after La veuve Caillou and Chulyen, histoire de corbeau. It’s a film I haven’t been able to shake since first experiencing it in 2019, one I will happily rewatch time and time again. I’m now eager to see what Patron does next – as it will need to be something extraordinary to build on this unforgettable short (no pressure Agnès!).