In this horror-fantasy fairy tale, an orphanage spirals into mayhem when a boy discovers a shadowy creature who comes to collect more than just the children's teeth…
READ REVIEW
Next Previous

Many childhood nightmares start with a warped version of a classic fairy tale, which is why Felipe Vargas’ twisted take on the tooth fairy is so chilling to behold. An impressive horror-fantasy that pays homage to Del Toro films, Milk Teeth is rich in visual splendor, chock full of grotesque montages and features a creature that will haunt your sleep for weeks. A short that harks back to Gothic horror, Milk Teeth redefines what it means to release the beast.

Growing up surrounded by Latin American magical realist tales, Vargas teamed up with writer Nick Lopez to bring Milk Teeth to the screen. One of four greenlit USC thesis films, the project required quite a bit of preparation – including a visit to a museum exhibit on medieval monsters and a marathon screening of Guillermo Del Toro films. And with that research came an attention to detail that makes the film feel like something out of an illustrated children’s book, but much more macabre in nature. Set against the backdrop of an orphanage, a boy discovers a shadowy creature who comes to collect more than just the children’s teeth. I don’t know about you, but this isn’t a story I’d tell the kids.

Let’s be honest, teeth are objectively kinda gross. The idea of leaving a dead tooth under your pillow all night for some fairy to collect and replace with a dirty coin (money is gross too!) is also pretty foul. So when Milk Teeth opens with a shot of a little boy practically sawing at his teeth with floss, complete with squishy sound effects, it’s hard not to cringe. Vargas is clearly a filmmaker who enjoys making his audience squeamish – and we’re here for it!

In crafting this film, the tooth fairy monster wasn’t just a plot device or a means for a jump scare. Vargas and Lopez humanized the creature lurking within the drain to seem almost maternal. Thematically, it makes a lot of sense, considering the monster fills a sick kind of parental void that the young boy is clearly missing. “At its heart, this is a macabre journey into an orphaned boy’s isolation – from the sharp sting of rejection to the building impassioned rage that follows,” Vargas tells Short of the Week. In creating a monster that in some way represents what the boy is missing, it becomes a metaphor for what he needs to overcome in himself. Milk Teeth is about self-acceptance just as much as it’s about not blindly giving up your teeth to an unseen sink monster to purchase frivolous goods. Don’t you just hate capitalism? There’s more to life, people!

But perhaps the best part about Milk Teeth is it’s impressive practical effects. “In the vein of the handcrafted effects of my favorite films, we developed elaborate teeth prosthesis and created the sink demon, entirely practically,” reveals Vargas. Creature designer Meredith Wells brought the creature to life based on an original mythology, using papier-mâché, clay, latex, and milk cartons of all things. And boy did it turn out scary – like a cross between the ‘Pale Man’ from Pan’s Labyrinth and a skeletal mummy with decayed wrappings. Frankly, it’s freaky, disgusting, and perfect. 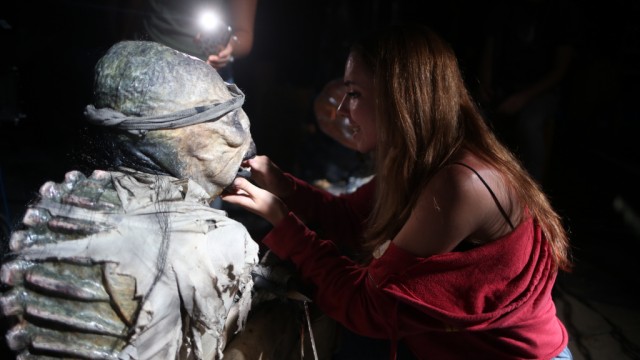 The “Sink Demon” get ready to do its thing on the set of Milk Teeth.

Part of why the film is so successful is because the monster is so well thought out. The “Sink Demon”, as Vargas refers to it, is a fully realized character within the story, not merely something that exists to rip little children to shreds (ok fine, it does that, too). Vargas wanted to make sure that the creature had its own core mythology and while that may not have been directly elaborated on screen, audiences would pick up on it nonetheless. On the film’s website, you can read all about the legend:

“When first designing the sink demon, fondly known by his code name ‘Lost Boy,’ I wanted to come up with a legend for him. What we as a creative settled on was the idea of a young orphan boy with no family falling into the bottom of the sewers and forgotten. For years he screamed and cried for help, shattering his voice and stretching his jaw and mouth. His back became hunched and hardened, his eyes began to rot away and his skin became slimy. In his new home, slowly, the little boy regressed into something more primal, more monstrous. And thus, the sink demon was born.”

Picking up awards at Fantasia (‘Best Actor’ for Aaron Bradshaw) and Horrible Imaginings Film festivals, Milk Teeth also played at Fantastic Fest, Sitges, and Aesthetica, as part of an impressive festival tour. Vargas is currently writing a young adult adventure pilot for IMDBtv, Sony Pictures Television, Act III Productions. He is also developing a kids comedy series with Disney Channel, writing a horror-fantasy Comic Book for Aftershock Media, and developing a sci-fi short film for Open Door Film Project – all of this while writing a horror feature and a thriller series. We can only hope to see more of the sink demon in future projects.