A young woman receives a mysterious, supernatural visitor in the middle of the night - a doppelgänger of her ex-boyfriend who appears only when he stalks her on social media.
READ REVIEW
Next Previous

Deep-diving into the social media life of an ex can be an excellent remedy for a broken, vengeful and even bored heart, but what if every time we got sucked into the black hole of online stalking, a rather unflattering physical manifestation of our insatiable curiosity appeared in front of our stalkee? Director Matt McClung takes this absurd concept to dizzying heights in his daringly original and deliciously loopy dark-comedy One to One.

Offering more than just an attention-grabbing premise, McClung’s 14-minute genre-bender successfully hits all the right comedic notes, whilst also managing to be utterly terrifying and surprisingly moving all at once. The director’s grounded approach, paired with a drum-tight edit and two stellar performances, come together in a fantastic cinematic gem that will make you think twice next time you’re tempted to stalk your ex. 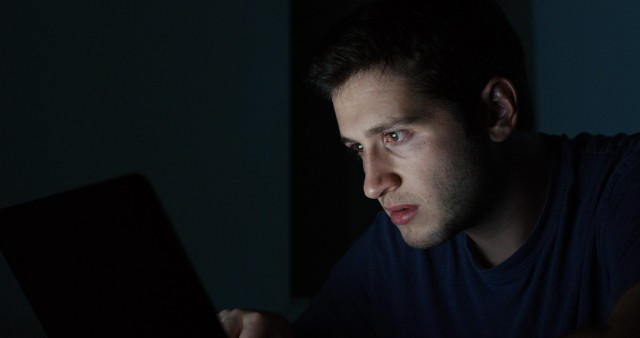 Corey Sherman as Danny – a bored ex stalking his previous partner – in One to One.

Immersed in the unusual scenario, we are introduced to Danny who’s bored at home, trying to keep himself busy painting birdhouses. As his mind drifts to his recent ex Violet, he turns to Facebook for an innocent peek at what she’s been up to lately. Unbeknown to Danny however, as soon as he starts browsing, his doppelgänger – frozen and vulnerable, clad in nothing but underpants and a pair of socks, materialises in front of Violet. After the initial shock of seeing her semi-naked ex in her home in the middle of the night subsidies, Violet realises that she too can have a little bit of fun with her unwanted visitor…

“I was thinking about how casually stalking a stranger online seems like universally accepted behavior, and how horrifying that would actually be in real life” – director McClung shared with S/W. “The idea of there being a very literal consequence to what feels like consequence-free behavior both amused and deeply disturbed me. It felt right to use this premise to explore the confusing aftermath of a breakup, and how someone you’re supposed to be “over” can also be the same person whose profile you’ve looked at 47 times in the last month. The movie needed to reflect the loneliness and vulnerability of that experience.”

Choosing ex-lovers for his main protagonists, McClung has elevated what could’ve been a fun sketch into something weightier, that should resonate with his audience. Resentment, regret, unresolved issues – there is plenty to reap from the fertile ground of a broken relationship, and McClung has done it with admirable originality. But what makes One to One so fresh is the director’s decision to ground the surreal concept firmly in reality.

Violet and her friends don’t waste too much screen time questioning the hairy, Y-fronts wearing apparition in her kitchen, and seem to register it as an unusual but not incredible occurrence. There are no traces of special effects or in-camera trickery either. By shifting the focus from the metaphysical fantasy and investing in the performances rather than the visuals, McClung has ensured that despite the sheer absurdity of it all, the story preserves its unique kind of logic. And the performances are certainly strong enough to carry it. 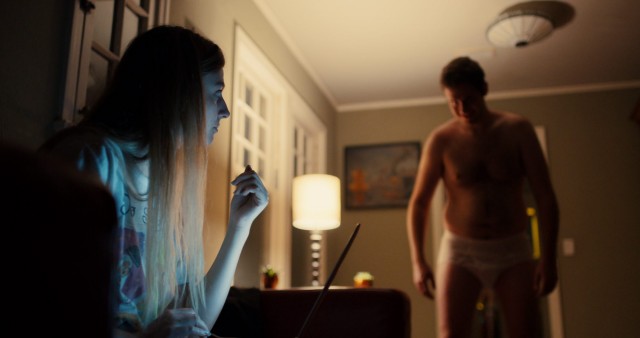 The scenes where Korkunis’ Violet interact with Sherman’s mute doppelgänger are the film’s most interesting.

Grace Korkunis is perfectly believable and delightfully charming as scornful Violet and we never question her actions or the reasons behind them, even when they don’t entirely make sense. But Corey Sherman is the real star here and that sinister, silent grimace on his face when he plays Danny’s doppelgänger is worth a thousand lines of dialogue. It’s also an image I fear I will never be able to forget… Finally, the performances and story are expertly pulled together in a perfectly paced package by editor Erik Vogt-Nilsen, allowing the actors and script to shine for not a minute too long.

McClung is currently in pre-production of a feature film, planning to shoot it later this year. The film is a character-driven haunted house movie that has some tonal similarities to One to One. We’ll keep you posted!