Every weekday, inmates are released from Huntsville State Penitentiary in Texas, taking in their first moments of freedom with phone calls, cigarettes, and quiet reflection at the Greyhound station up the block.
READ REVIEW
Next Previous 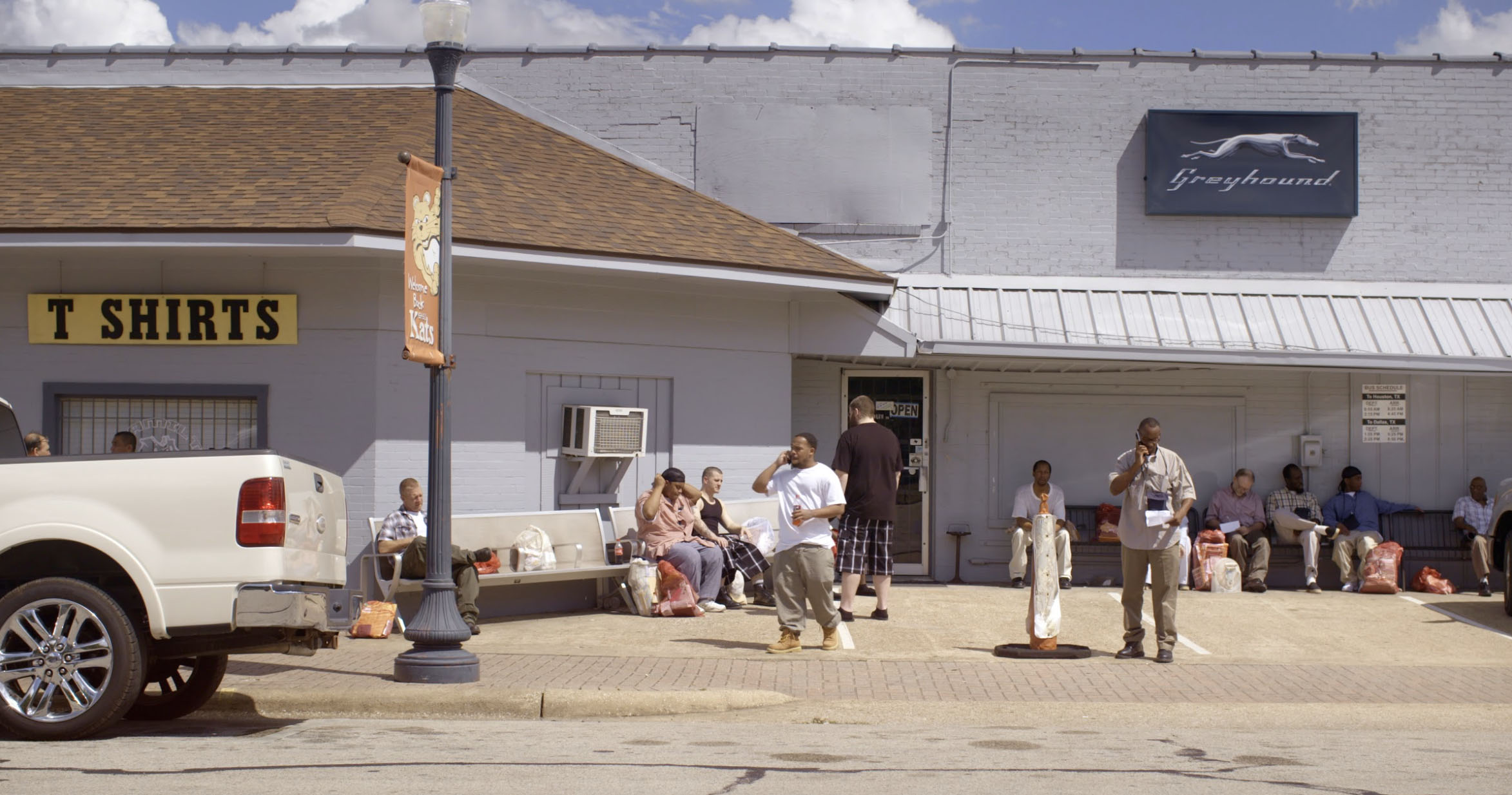 Documentary about Community in Live-Action
Directed By Jamie Meltzer, Chris Filippone
Made In USA

he Huntsville station may look like an unassuming place to catch a bus, but for many, it’s a symbol of hope and a gateway to an uncertain future, that’s been just out of reach. Jamie Meltzer and Chris Filippone’s touching documentary Huntsville Station is a cinematic experience that will have you empathizing with new parolees on a level that will surely surprise you. As their fly-on-the-wall approach captures these vulnerable moments you’ll be left reflecting on just how precious time truly is and how our humanity will always keep us connected.

“It seemed the perfect setting for a short film, limited to this one space and moment”

When filmmaker Jamie Meltzer first visited a small Greyhound bus station in Huntsville, Texas, his mind was focused on an entirely different documentary that he was filming (True Conviction). Upon taking in his surroundings, he found himself struck by how surreal it was to be privy to something so intimate among strangers, as he witnessed firsthand these just-released parolees about to make their way back into the real world. “It seemed the perfect setting for a short film, limited to this one space and moment, but containing all sorts of complicated emotions: excitement about finally being released but also trepidation about what’s to come,” Meltzer tells Short of the Week. 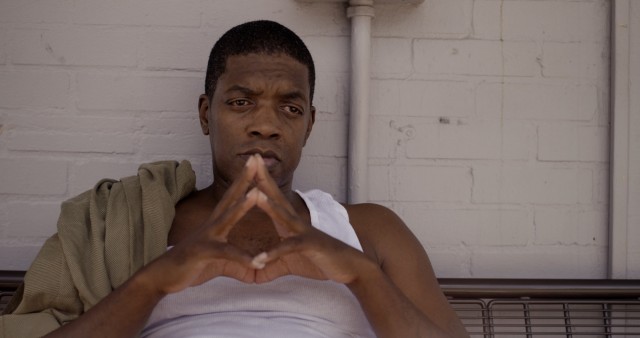 A recently released inmate quietly reflects on life outside of prison

Little did Meltzer know how much the experience would affect him, let alone that Chris Filippone, one of his students at Stanford University (where Meltzer is the Program Director of the M.F.A. Program in Documentary Film), would mention a photo-essay about the bus station to him. As the two conversed about Meltzer’s experience, the idea became a minor obsession for both of them and they soon started discussing how they could tell this story. “We started talking about how we might explore the space cinematically and allow the viewer to have both a visceral experience of this unusual space, but also reflect upon the criminal justice system in a different way,” Filippone explains.

Meltzer and Filippone faced a number of challenges in making this film. While normally, a documentary filmmaker might build a rapport with their subjects before filming, Meltzer and Filippone didn’t have that luxury. Not only were they unable to reach out to potential parolees, or anyone being released beforehand, they couldn’t seem to get the bus station on the phone to coordinate at all. So instead they found themselves showing up just outside of the prison with camera in hand, waiting for their opportunity to start filming. In this way, the entire process would have to be organic and entirely off the cuff. But with so much unpredictability, Meltzer and Filippone could only hope that the parolees would be receptive to being filmed.

“Surprisingly, we found more often than not that this moment for them was so much bigger than our presence with a camera and sound equipment. We were actually a much smaller part of their experience and because of that, we were able to quickly build trust and just be in the moment with them,” Filippone tells Short of the Week. This revelation is humbling in itself and so is witnessing such unfiltered emotion from men, some of who were incarcerated for up to 30 years. It’s hard not to feel just as elated, anxious, or shocked as those we witness on screen get their first taste of freedom.

“It was a really strange and intense production experience”

Filming over several days, the fact that each day saw a different set of prisoners released, resulted in the filmmakers having to build relationships and trust before the buses departed, giving them roughly 30 minutes to an hour to shoot what they needed. “It was a really strange and intense production experience – like this storm of activity that you wait for, then it quickly rolls over you in this overwhelming way, and then you’re left in almost total emptiness and silence,” Meltzer elaborated. The narrative structure, therefore, echoed that of the experience, taking us through the same emotional journey as the newly released men up until the point where they depart for their uncertain future.

The bus station couldn’t be a more fitting backdrop for the parolees’ transition into society, in that it embodies a perfect amalgamation of what being in flux between the two worlds must feel like. Meltzer and Filippone’s approach to this story was handled with an undeniable amount of care and respect, so it should come as no surprise that some men gravitated toward their cameras seeking a kind of cathartic release. “We found that the presence of the camera allowed for a reflective space for some of the men to begin to process what they went through, the current moment, and the future,” explains Filippone. 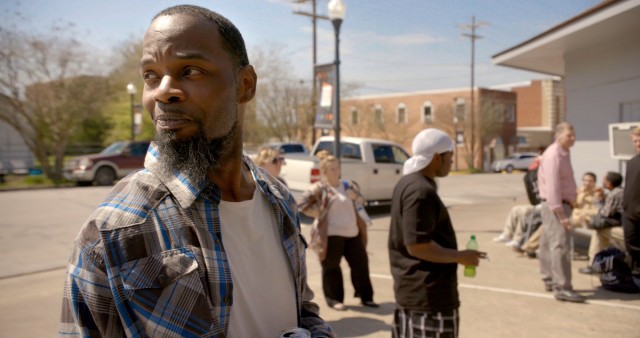 Meltzer and Filippone never reveal why the men were incarcerated to begin with.

Understandably, it was nearly impossible for these men to release any kind of emotion while incarcerated, for fear of showing weakness, but being outside of prison walls finally allowed for a little vulnerability. Between the one man who reflects on his 30 years in the system and the man at the end who finally sheds tears for himself, in what feels like a frozen moment, it’s hard not to feel emotional with them – the gravity of the situation finally in focus. Poignantly, Meltzer and Filippone never reveal why the men were incarcerated to begin with because their film isn’t about that. All that mattered was their humanity and perhaps a new outlook of our prison system.

Like many documentarians will tell you, discoveries come from the filmmaking process itself. As Meltzer explains to Short of the Week: “The resulting film is both close to the original kernel of an idea we had, but also in a really special way totally different from what we expected going into the project.” And we couldn’t be more moved by the resulting film.

Huntsville Station played at Berlinale, SXSW, and Hot Docs. Filippone is currently working as an editor on Erin Semine Kökdil’s Desde que llegaste… (Since you arrived…) – a short poetic documentary that follows a group of Central American mothers travelling by bus through Mexico, searching for their children who migrated north, but went missing on the migrant trail. He is also currently planning his first feature documentary.