A woman goes on a live talk show to confront a famous music producer, only to find him armed with the elusive "perfect apology."
READ REVIEW
Next Previous 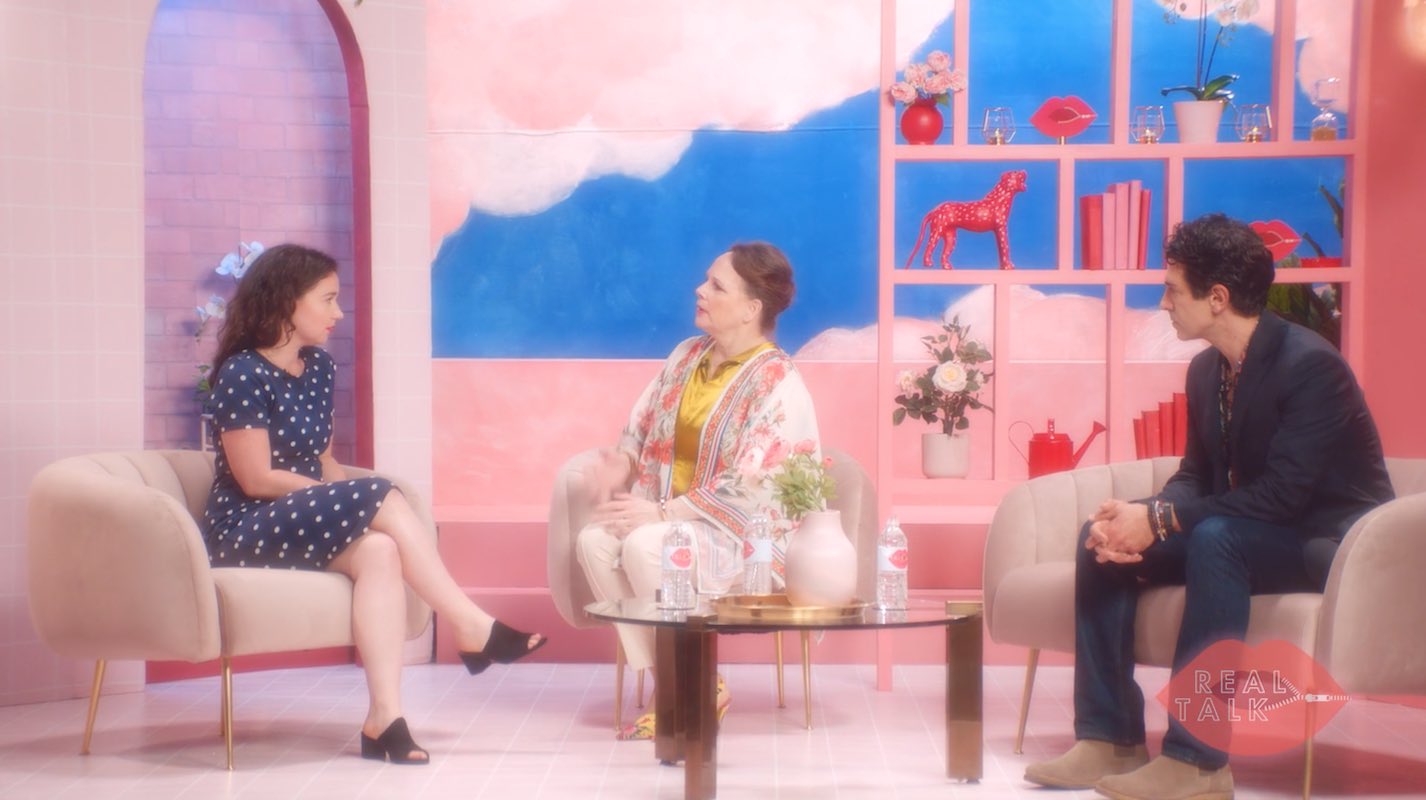 Three years ago, Natalie scored a session with an influential music producer. In the post #MeToo era, what happened that Sunday at the studio doesn’t feel that out of the ordinary. Now given the opportunity to confront her abuser on live TV, it makes her realize that even though things have changed, those in the wrong found a way to bounce back. In Real Talk, writer/director Artemis Shaw uses satire to explore the insidious side of a PR system, which has adapted to the new normal, by turning these events into theatrics ready for consumption.

When #MeToo was gaining momentum and started to finally be taken seriously, public apologies started becoming a common practice, as many abusers tried to use them to prevent their impending cancellation. Shaw tells us that she actually saved all those apologies (a folder of screenshots), as they were released via social media.

“These apologies all had dramatic irony sewn into them”, she explains, “they were explicitly created for an audience, and not the victim”. A pattern appeared in those statements as she kept on tracking them and Shaw believes that “you could study the different tactics accused abusers took to seed a future comeback, without ever actually admitting to any wrong-doing.”

The disturbing manipulative effects of the PR machine and the fact that women who have spoken out have to perform their story again and again, lead her to depict this situation with a satirical angle. At first, the film might appear to tackle its subject a bit too “head-on”, but through its farcical approach, Real Talk brings a new perspective to the issue and ultimately makes its impact more powerful.

With her over-the-top premise, Shaw also efficiently exposes how complicit we, as avid consumers of pop culture, are in perpetuating these narratives. The satire allows her to push the ridiculousness of the situation to its maximum. Focusing on how survivors navigate both their reality, and the PR machine created out of their story, makes the different stages of the packaging of a sexual abuse story as a pop culture item quite undeniable.

The screenplay and production also play a big role in putting the focus on the media’s representation of these stories, with Real Talk’s narrative cleverly unfolding from two perspectives – Natalie’s individual viewpoint and that of the daytime TV show. When witnessing events through the lens of the chat show format, we see it through a daytime TV aesthetic with vibrant colors, dramatic camera movements, flattering angles and soft lighting…it all feels manipulative. 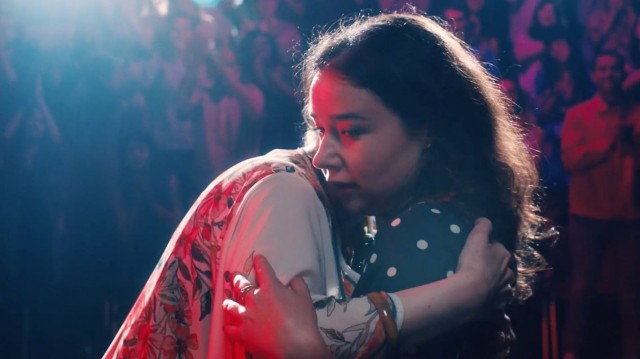 Switch to Natalie’s perspective and her reality feels much more overwhelming. Focusing on the details which show the imperfections the TV camera purposely attempts to hide, it truly becomes disturbing when the theatrics become obvious. Through the audience reactions, the language the producer uses to apologize and all those cliche quotes the host uses (made more infuriating by the fact that she’s a woman), as a viewer, we feel as helpless to stop the events as Natalie herself.

With all this in mind, Shaw needed to find the perfect climax to ensure her short landed its impact and she found it by concluding her story with having an obviously uncomfortable Natalie forced to perform her song, with those stupid graphics behind her, to the show’s audience. However, it’s Real Talk’s last scene that truly did it for me. The complete dehumanization of her story, proving that yep…she goes back to her life, as if nothing happened – a truly depressing depiction of “the show must go on”.

Finally, it would feel unjust if I finished this article without commending the work of Sarah Steele as Natalie. While the whole film lives in a satirical tone, it all works because her performance is so genuinely compelling. She navigates her character’s emotions with a poignant sensitivity, showing her strength, vulnerabilities and authentic reactions to what is happening. I was genuinely moved by how it is mostly through her eyes that we understand how she is feeling inside.

We are happy to welcome back Artemis Shaw to S/W, having already featured her previous short documentary Single Room Occupancy, which she co-directed with Alexander W. Lewis. Shaw is now currently in post-production of her first feature film as a producer, Have a Nice Life.