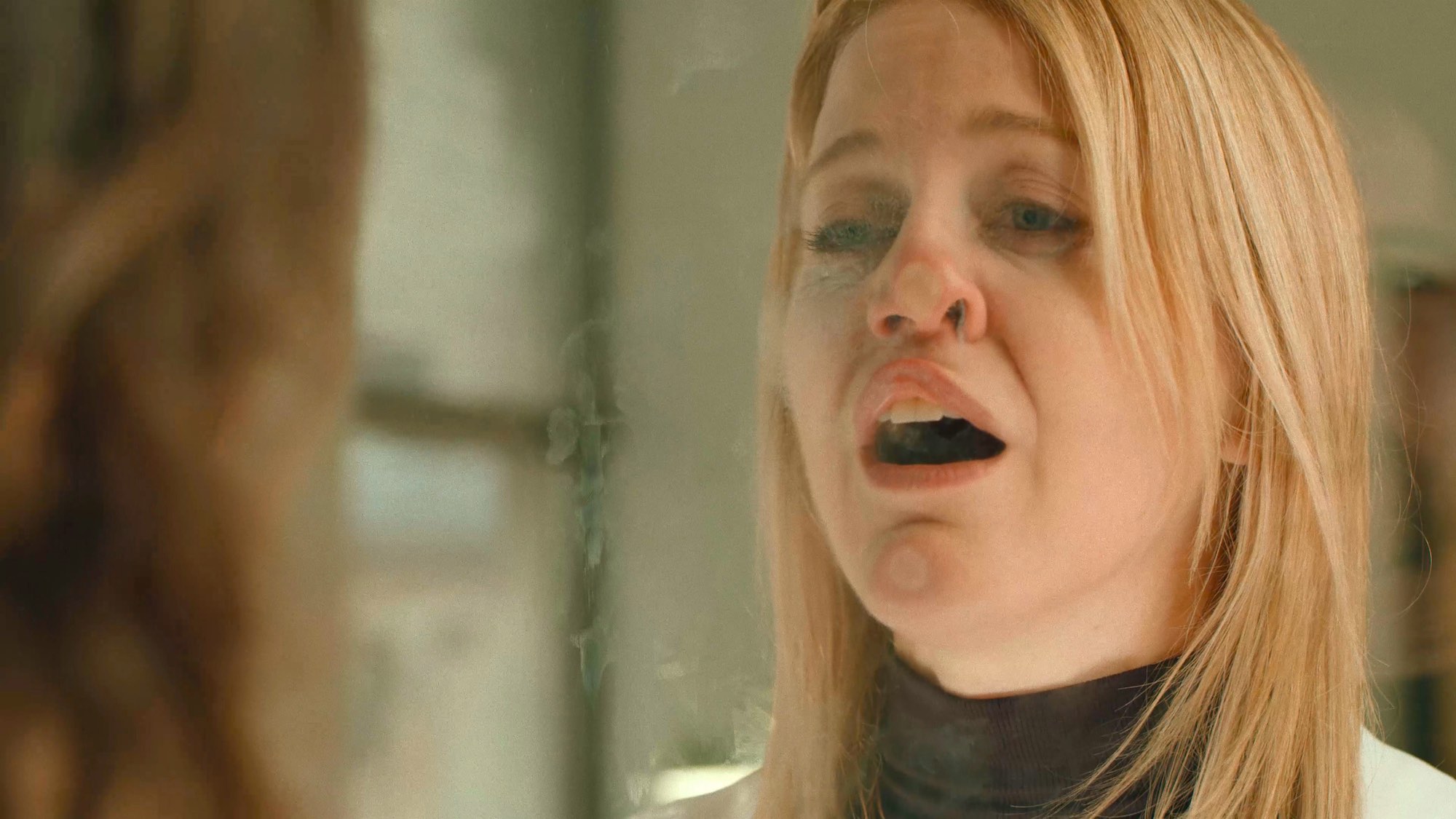 Sexual fantasies are wonderful—the kinkier the better if you ask me. But, in my experience, it’s sometimes best they remain as precisely that—fantasies—to be repeatedly enjoyed inside the limitless mind, safeguarded against judgment and disappointment. This dichotomy between fantasy and reality is at the heart of Morgan Krantz’s raunchy, but perceptive short film, Squeegee. Centred around a real (and enjoyably ridiculous) encounter between a prominent businesswoman and a rugged window-cleaner, the premise of the film sounds like a story snatched out of Penthouse magazine. However, underneath the surface titillation, it reveals itself as a smart interrogation of lust, and how barriers to intimacy, both figurative and literal, paradoxically serve to turn up the heat.

Lori is a high-flying businesswoman. She’s got the title, the office and the assistant to prove it. She’s also got a very special appointment with a high-flyer of a different type—the daring window-washer who comes to clean the skyscraper’s windows. So begins their silent rendezvous, a daring dance on opposite sides of the glass. Passionate, intimate, and surprisingly romantic, it’s utterly mesmerising.

It’s also quite funny. Playing like a post-internet reimagining of the classic Diet Coke ad, this eleven-minute comedy offers satirical commentary on the power relationships of modern society, and delivers it with a certain hedonic glee, as the sheer mechanics of the dalliance provide plenty of opportunity for slapstick physical humour. Yet, for every squirm-inducing moment, there is a lovingly tender one to counterbalance it, and the result is pure poetic rapture. Fiercely seductive and hugely entertaining, Squeegee is, to my mind, the ultimate feel-good film, and one so very hard to resist.

The idea for Squeegee, or at least part of it, was born in a busy restaurant, where Krantz met Blair McKenzie, a Scottish immigrant and real-life window-washer who immediately grabbed the director’s attention.

“He just seemed like a cool guy, a real daredevil”, Krantz explains as we discuss the man who inspired his short. “He has this thick, working-man’s Scottish accent, you can’t understand half of what he says, but we got along. I’m afraid of heights, so the idea of risking falling to your death for the sake of some jerk’s office window seemed insane to me, but I knew there was something cinematic in there”. With plenty of experience of hanging off skyscrapers, but none of acting, McKenzie was understandably nervous about starring in the film, but eventually agreed.

“I find sex to be pretty absurd, and I wanted to show that”

Having found his muse, all Krantz had left to do was come up with an idea for the film, for which he drew inspiration from his personal love life. “I find sex to be pretty absurd, and I wanted to show that”, he admits as we discuss his narrative. “I’ve also been in relationships with people where we both know there is no practical way to really be together. But when you’re having one of these “flings,” I have found that it can actually be easier to express how wild you are about a person… because you both know that you can never end up together. So that’s the glass between these two characters”.

With Squeegee being a largely performance-led piece, Krantz had the difficult task of holding the viewer’s attention without the use of dialogue. Delivering top notch humour, he injects just the right amount of smut to make it really funny, without venturing into gross-out comedy, and perfectly balances the sexual moments with a dazzling dance of seduction.

And said dance is a special sight to behold—the delicate beauty of the choreography paired with the classical score conjuring up images of ballet dancers, bound together by their all-consuming desire and torn apart by their social status. All in all it’s quite a high-wire balancing act Krantz pulls off between operatic eros and the base, almost animalistic nature of passion. Squeegee is a deliciously unexpected, heartwarming treat, and whilst so many films disappoint in that dreaded final act, I can guarantee you there is nothing *ahem* anti-climatic about this one.