Arnold the bear feels like the world he inhabits is a lie. Is he mad, or the victim of a great prank?
READ REVIEW
Next Previous 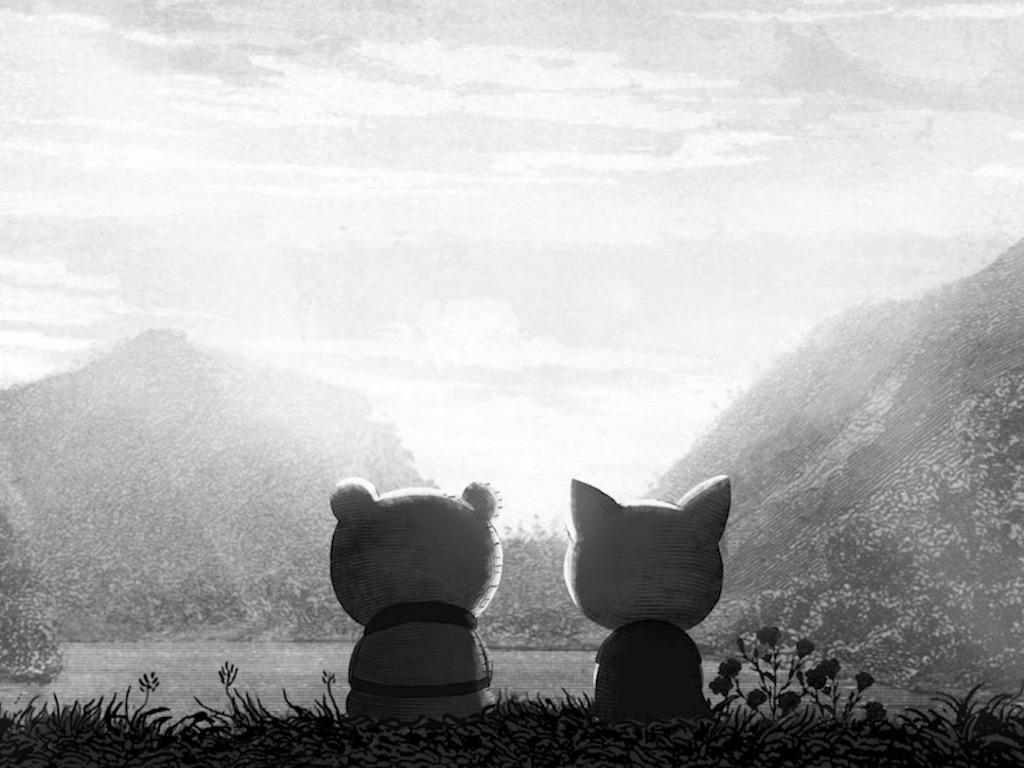 “The world is a wonderful set, but has a deplorable cast,” intones a giant killer owl in Decorado, misquoting Oscar Wilde. Heed his words: they capture the mood of this film, by Spanish master of the macabre Alberto Vázquez, more succinctly than I could.

The film’s deplorable cast includes a mallet-wielding mushroom with gloomy eyes, a man in a bedsheet posing as a ghost, and Ronald Duck, a washed-up, boozed-up thespian who resembles a certain Disney bird. In the midst of them all is Arnold the bear, our anxious protagonist, who – like us – wonders why the world he inhabits is so odd. At times, he’s convinced he’s hallucinating; at others, he suspects that the characters around him are engaged in a vast performance, staged to undermine his sanity.

Is it him or everyone else? Decorado has fun playing it both ways. Visually, the film runs with the notion of life as theatre. Curtains open on the first shot and close again on the haunting final scene. The characters act out their histrionic skits in front of ornate backgrounds rendered as 19th-century engravings. When Arnold starts to interact with the sets, questioning whether they’re real, the scene comes across as a meta-commentary on the artifice of animation, and the strange mental processes that enable us to see a drawn world as “real”.

I want to describe Decorado as a Lynchian Truman Show, but really, it looks and feels like nothing else – except Vázquez’s own past work, which is populated with mock-cute animals experiencing spiritual desolation. Vázquez started out drawing underground comics before moving into animation, where he has expanded on the striking narrative universe of his strips in a handful of shorts and one feature. A self-taught filmmaker, he works closely with a regular team of animators (some of whom, like Khris Cembe and Roc Espinet, are talented directors in their own right).

Its origins in short comics explain the structure of Decorado, which is essentially a collection of sketches, the only real through line being Arnold’s mounting paranoia. After its release, Vázquez tried to develop it into a series but failed to attract backers. Even so, the film enjoyed a gilded festival run, winning a Goya (Spain’s equivalent of an Oscar) and a prize at Annecy. The director returns to Annecy (in its virtual incarnation) next month to premiere his latest short Homeless Home. If the trailer is anything to go by, it will be as diabolically entertaining as this one.