My Best Friend is Stuck on the Ceiling

Connor, secretly in love with his best friend Rach, has gotten her an amazing birthday present – something that’s sure to knock her off her feet.
READ REVIEW
Next Previous

My Best Friend is Stuck on the Ceiling 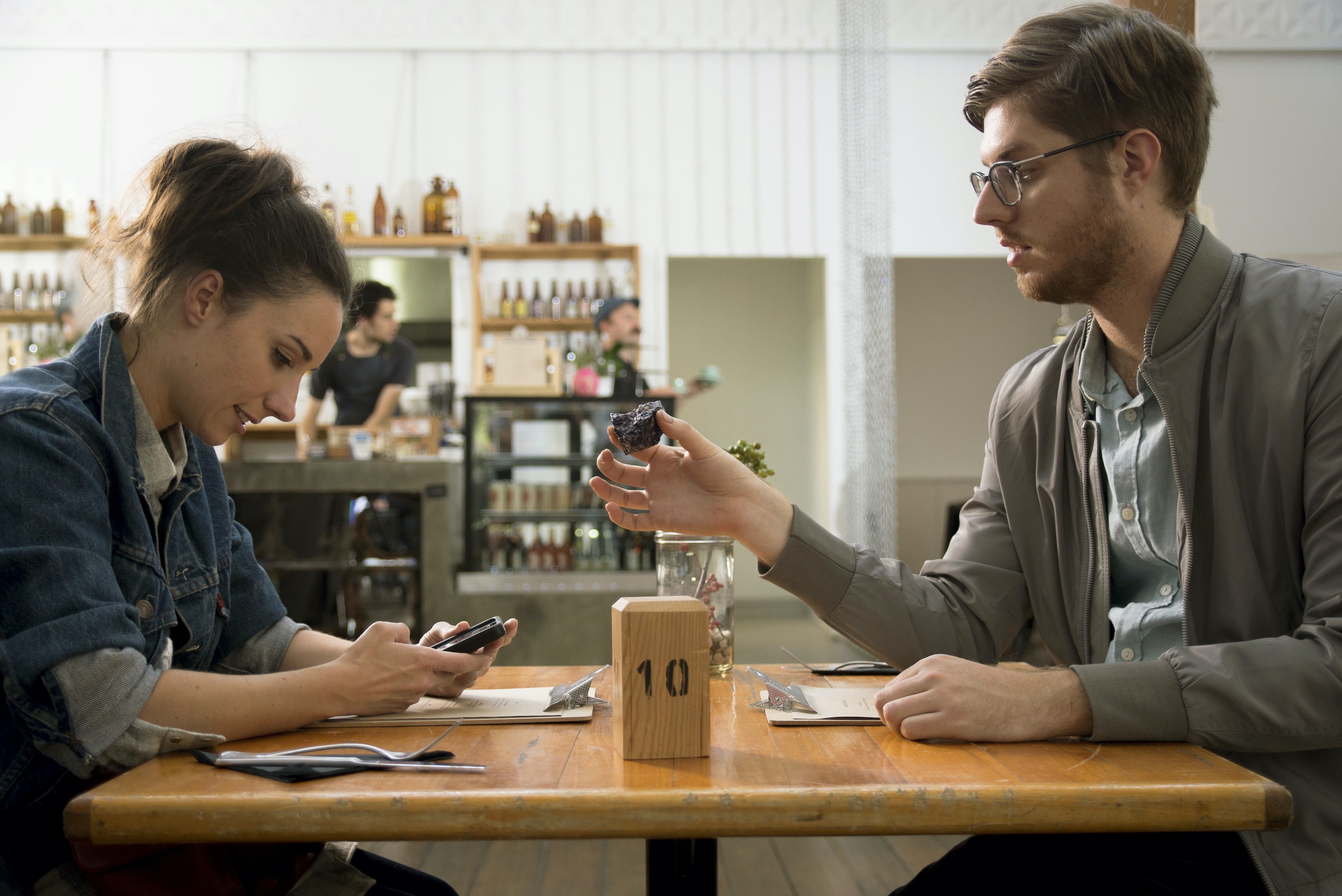 Mood plays an influential role in the viewing experience. Your movie choice might be inspired by a desire to be frightened, thrilled or emotionally moved, but sometimes you just want to see a film that’s light-hearted, something that lifts you up and leaves you with a good feeling. Matt Vesely’s My Best Friend Is Stuck On The Ceiling is exactly that. Harmless fun with an extra spark of imagination. The magic of this 10-minute comedy sits in its ability to combine a grounded, personal story with a supernatural hook.

Following thirty-something Connor, as he waits to meet his best friend, Rach, it’s clear early on in Vesely’s story that this encounter has a greater importance to him, than a casual meet-up. As he twitches around in his seat and stares at the empty chair in front of him, even the waiter is bewildered by Connor’s behavior. When Rach arrives, Connor just doesn’t seem to be able to find the right moment to give her his belated birthday gift: A mysterious space rock from Siberia!

“I’ve always been attracted to characters that mean well, but fail miserably”

Misunderstandings ensue and repressed feelings rise to the surface. But all of this is nothing compared to the chaos that unfolds once Connor does find the courage to give Rach her present. “I’ve always been attracted to characters that mean well, but fail miserably”, writer/director Matt Vesely explains. Even the title card at the beginning of the film is self-deprecating.

My Best Friend Is Stuck On The Ceiling is ultimately a story about owning up to one’s emotions and recognizing that (in this case) the girl of your dreams is a person in their own right and their existence isn’t only to satisfy your romantic needs. It might sound like a given, but remember that this is a trope many of the romantic comedies fall into, something that Vesely was aware of while developing the project.

Wanting to make a film about courage, Vesely penned a story based on all the regrets he’d had throughout his life and inspired by all those opportunities he never took. “I realized that this isn’t a story about someone’s inner demons or selfish regrets”, the director explains. “It’s about the way that sometimes you can get so wrapped up in your own head, and your own idea of a friendship or a relationship, that you forget that there’s someone else across the table from you.”

I am the first to admit that a story about a guy who’s secretly in love with his best friend is a well-trodden theme. Then again, who among us hasn’t been in that situation before? Maybe you empathize with Tom Ward’s lovable schmuck Connor? Or maybe you’ve been in the other seat, identifying with Rach, the unsuspecting love interest portrayed by Erin James?

The basic premise of My Best Friend Is Stuck On The Ceiling feels like it could have been taken directly from a TV sitcom or Hollywood rom-com. Due to the film’s charming execution however, this doesn’t work to the short’s detriment and instead can be counted as a compliment, speaking to Vesely’s talent as a comedic filmmaker.

Uniting two of his main passions, comedy and science fiction, Vesely explains he’s attracted to genre filmmaking “to dig into very real human emotions”. This combination seems to hit a sweet spot for the writer/director, as his latest short SYSTEM ERROR (part of the official competition at the Tribeca Film Festival) once again blends the two. The film serves as a “proof of concept for a six-part digital series called OVERHEATER – a dystopian rom-com.” This is the second time I’ve heard this description in the last few weeks, while using it myself for one of my own projects. Seems like “the dystopian rom-com’s time has come“, indeed.