For a few hours every Saturday, Dr. Marc Lasher and a group of volunteers provide free medical care and clean needles to IV drug users from across Fresno County, California.
READ REVIEW
Next Previous 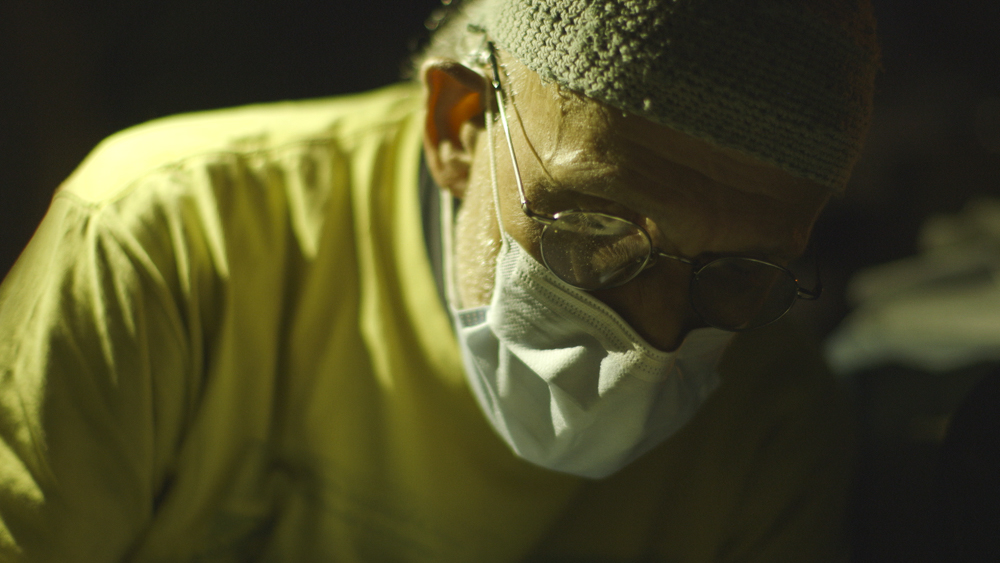 Spend a day with Dr. Marc Lasher as he runs his own free health care clinic out of an old school bus. With the help of a few volunteers, he provides counsel and treatment to his patients in a no-nonsense, pragmatic way. His seemingly gruff demeanor does not lack empathy however—most of his clientele are battling addiction and their need of Lasher and his marvelous medical bus is just one more signifier of hard lives filled with disappointment. As much as they need medicine, they also need a counselor, and Dr. Lasher in his distinct way often wears both hats. In The Clinic, director Elivia Shaw takes us inside one man’s selfless attempt to provide care to some of society’s most vulnerable members. Via an intimate verité approach, Shaw allows us to witness the day to day face of addiction and the lengths good samaritans must go to shoulder a burden that government will not.

“As a filmmaker, I look for spaces teeming with our society’s complications and contradictions.” – Elivia Shaw

The tight space that is the bus acting as a clinic—the doctor, the volunteers, the immense line of patients—all these elements combine in a setting that is charged with socio-cultural undercurrents. Though Shaw takes a somewhat neutral, observational approach to the film, as an audience member we can’t escape the subtext that is invoked during the runtime of the film. The very existence of the bus, its necessity for its patients, is a marker of the inadequacy of the United States healthcare system. By highlighting this community, Shaw confronts us to this harsh reality. However, she makes a point of avoiding over-sensationalized tropes via a non-voyeuristic perspective and instead focuses on the treatment side of the issue. As much as The Clinic is about healthcare writ large, it is also about the ongoing drug crisis in America’s forgotten areas, and provides a clear-eyed, yet compassionate view of the damage it is causing. She clearly developed a strong trust with her subjects which allows very open conversations about addiction and how it affects the patient’s lives. Addiction affects people in different ways, and each patient by sharing their unique experience brings a new challenge for Dr. Lasher and his team. Where Shaw succeeds with this work is by not stripping her subjects of their dignity—she catches them in very vulnerable moments, needing help—yet her camera captures for the screen honest looks, not pathetic ones.

The way the film was shot gives the audience the experience of being right there with Dr. Lasher and his team without interfering in their regular activities. Every single detail was carefully thought to create this very authentic and genuine atmosphere. From the very beginning, Shaw wanted to create the experience of a day in the life of Dr. Lasher. A “fly on the wall” approach was deemed the most likely way to authentically relate the reality of those Saturdays in the bus, visually and emotionally. To get the visual aesthetic she wanted Shaw used a 50mm prime lens, which, in this tight space, provides a sense of immediacy to the photography. Shaw was the only crew member present, as in such a tight space an additional person would have probably upset the balance necessary to not disrupt subject behavior. This physical closeness definitely helped in building a rapport with all the subjects and getting them used to the presence of the camera, which reinforces the intimacy of the film. Choosing to shoot handheld, in this confined space with the camera at eye level, is ultimately what really makes the experience of being in the bus feel real for audiences. And once we are there with them, we are living this Saturday with them—the doctor and the patients—which ends up delivering the most efficient emotional understanding of the situation in general.

Filmed over eight different Saturdays, in editing the film was condensed to look like a single day in order to not create any chronological distraction and not alter the experience as an audience member. What really struck me about the film’s approach was how bright and colorful the film looks in contrast to its subject matter—the sheer beauty of its execution at times providing balance to what could otherwise be an overwhelmingly depressing subject.

The Clinic premieres online today, after a successful festival run which saw the film pick up the Grand Jury Award at AFI Fest 2019 and the Palm Springs ShortFest 2019 Local Jury Award. Produced through Standford University’s Documentary MFA program, the school has developed quite a reputation in recent years for socially conscious verité filmmaking, as the work of Elizabeth Lo shows. Shaw is currently co-producing a feature-length documentary about our relationship to technology and mentions to us that she has a few new projects in development.