Jonathan, twelve years old, lives with his sister, his mother and also some men. They all have the same face and nest in closets, drawers, TV set …
READ REVIEW
Next Previous 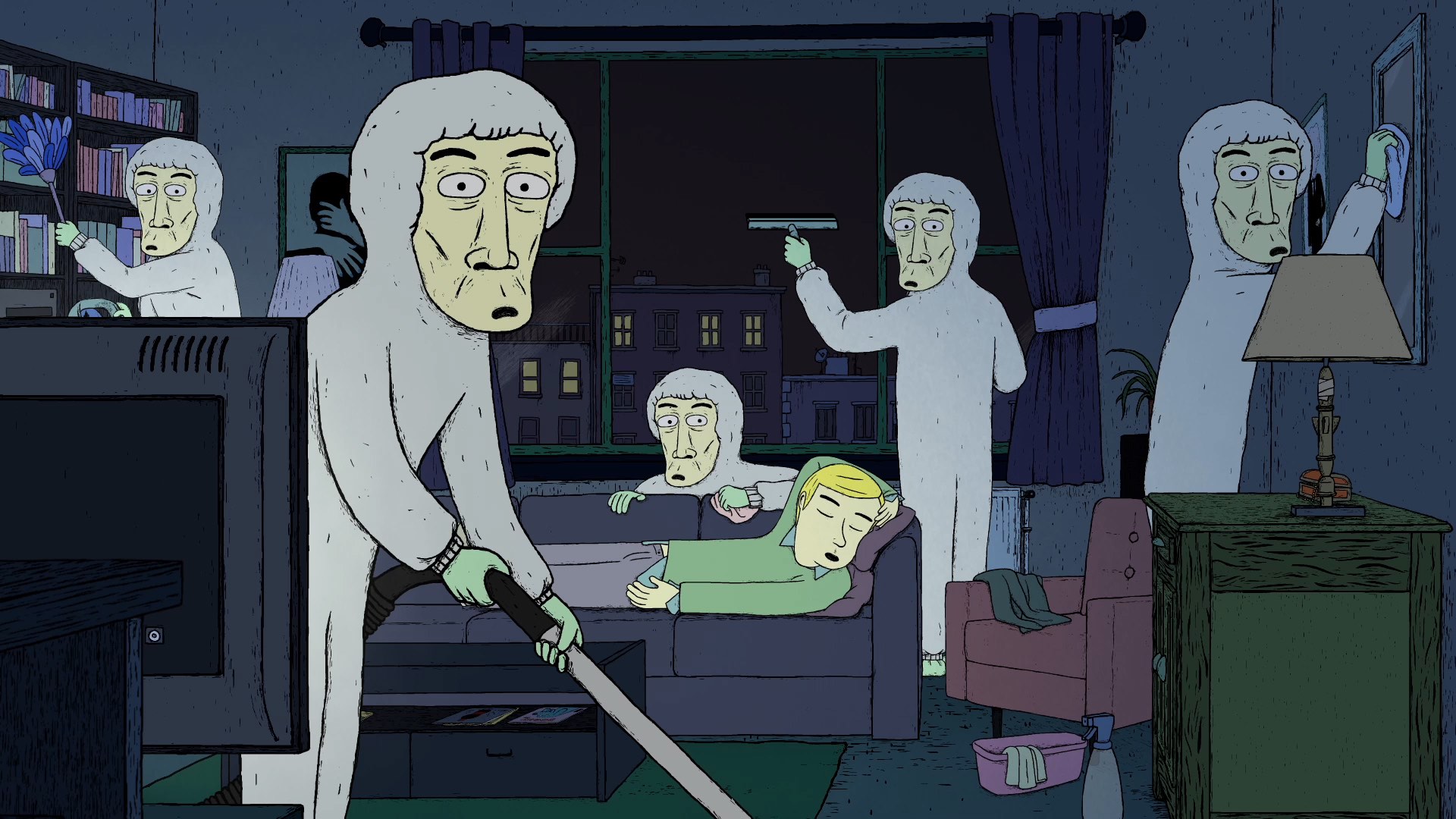 A personal short examining the impact of an absent parental figure in a child’s life, Osman Cerfon’s Je sors acheter des cigarettes (I’m going out for cigarettes) explores the notion that the absence of an unknown person can make them potentially everywhere. “I remember when I was teenager, I was on the bus, looking at the male passengers and telling myself that one of them might be my dad and I would never know it”, Cerfon explains and it’s easy to see how this line-of-thought developed into this surreal, but surprisingly emotive short.

Nominated for Best Short Subject at this year’s Annie Awards, Cerfon’s 14-minute animated short follows 12yr-old Jonathan as he goes about his everyday business of doing the laundry, playing video games and annoying his big sister. Life seems pretty normal, except that everywhere Jonathan looks – in the kitchen cabinets, in the washing machine, on the bookshelf – he sees strange men, all with the same face.

Setting out to tell a relatable, intimate story, Cerfon knew his first challenge was to portray the “untold things” in this family, without making them too obvious. For about 10-minutes of I’m going out for cigarettes, it certainly isn’t clear exactly what is going on in the life of our young protagonist. However, when Jonathan finds a photo of his dad, hidden in his Mum’s draw, his perspective changes and we witness him make an important and necessary transition in his life. As a viewer, that moment is like finding the last piece to an incomplete puzzle.

Alongside bringing this personal tale to screen, Cerfon admits he also made I’m going out for cigarettes to prove to himself that’s it’s possible to “mix different tones in the short format”. Playfully skipping across the genre borders of comedy, drama, thriller and fantasy, the director hopes that this mixture of tones work together and co-exist in order to give “the impression of simple but multilayered story”.

Building on the style he developed in earlier shorts Sticky Ends, Chap. 1 & Sticky Ends, Chap. 2, but injecting it with a more authentic feel to increase audience engagement, it’s easy to see why I’m going out for cigarettes proved so popular on the festival scene – winning awards at Locarno 2018 and nominated for prizes at Clermont-Ferrand and SXSW.