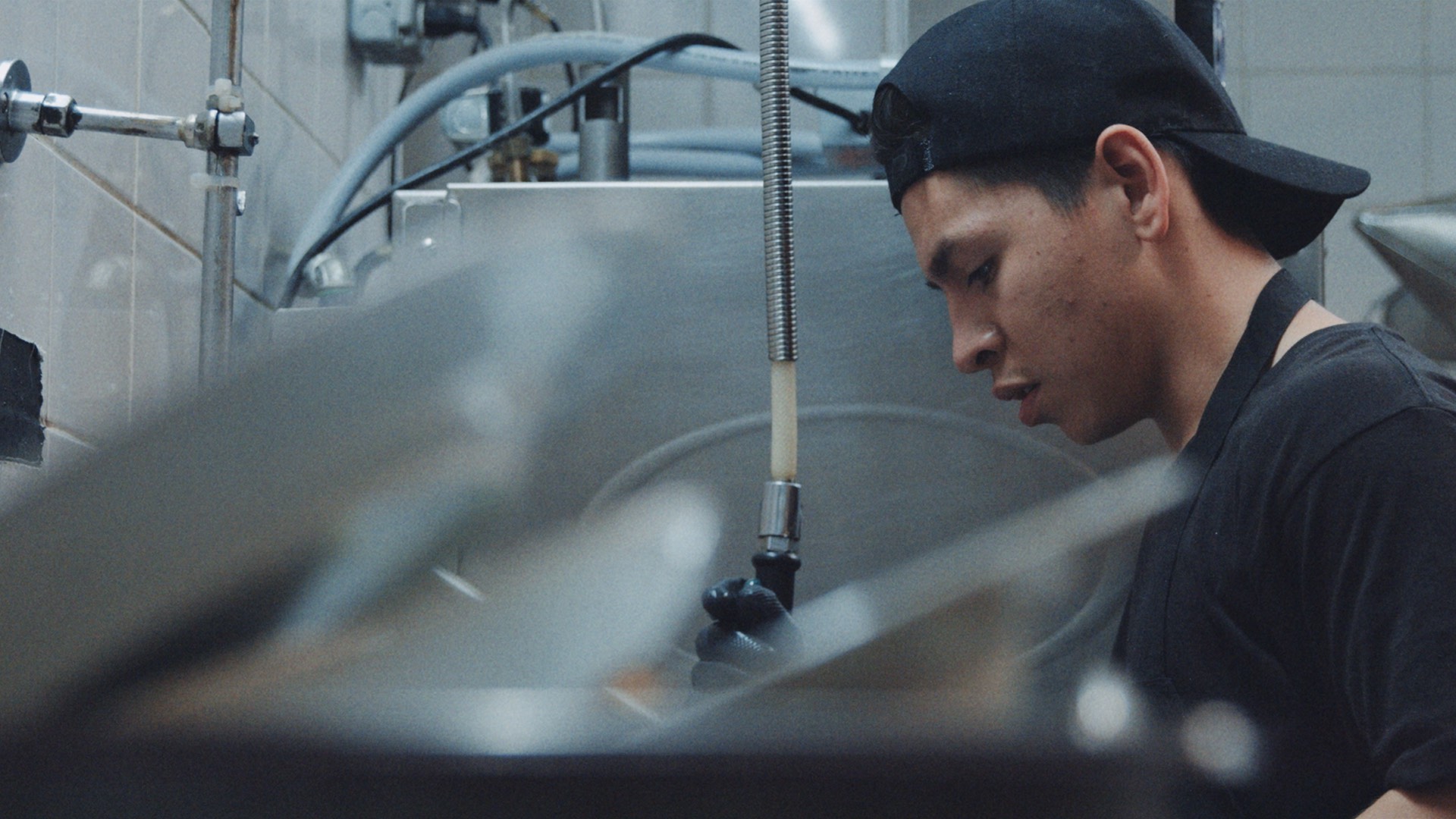 Editor’s Note: Subsequent to our featuring, this film was acquired for distribution by HBO and is currently offline. The trailer is embedded above.

A clever satire on race and class in America’s greatest city, The Dishwasher is a contemporary quest narrative set against the backdrop of trendy, high-end restaurants. One of the smartest shorts of 2019, the film, from Sam Roden and Nick Hartanto, is remarkable for the deft way it shoehorns into its plot so many contemporary topics: from superstar culture and the exploitation it fuels, to issues of cultural appropriation and authenticity. These themes serve to highlight the larger contradictory forces at play in immigrant assimilation to the US, and serve as a snapshot of the current state of the American Dream. Despite these heady concerns, the film is never self-serious though, as it incorporates them seamlessly into a straightforward and frequently funny story, full of setbacks and pratfalls, that is as entertaining as it is thought-provoking.

Nicolás, a Mexican immigrant, is a dishwasher at a fine dining restaurant in New York. When his head chef challenges him to find handmade tortillas for a surprise addition to their menu, Nicolás jumps at the opportunity to prove himself, embarking on a journey that ultimately tests the limits of his ambition. Inspired by real events, and informed by Roden and Hartanto’s experience working in Michelin star restaurants in NYC and San Francisco, there is an authenticity to The Dishwasher that rings true. Though the setup is particular to the restaurant industry, in character it isn’t different than any number of other competitive fields, from software design to filmmaking, where dictatorial “geniuses” hold sway and innumerable replacements are champing at the bit for their chance to be underpaid and overworked.

Jokes are certainly made at the expense of the pretentious restaurant culture that sends Nicolás on his quest, but the satire is not played overly broad. Elisha Yaffe, familiar to S/W fans for his prodigious short film career, plays the celebrity chef and while his request is mildly racist (the blithe assumption that the Mexican in his kitchen knows where to find the “real” tortillas) he isn’t a caricature à la Meryl Streep in The Devil Wears Prada. Instead, the film finds humor in small absurdities—it is immediately revealed that the acclaimed “authentic” Mexican restaurant in the immigrant-heavy neighborhood Nicolás lives uses store-bought tortillas. This central irony, that he is sent on a quest for a product that doesn’t exist, in order to cater to an upscale, largely white clientele for whom authenticity is such a defining virtue that it must be manufactured when it cannot be found, is deliciously potent. It neatly delineates the two worlds—that of the old-world heritage from which Nicolás comes from, and that of the American culture of success, appropriation, and commodification to which he aspires to.

Yet Nicolás persists. The fine line Roden and Hartanto walk is to be perceptive to this state of affairs, take their shots where they can, but not oversell the critique. Pointedly they remain sympathetic to Nicolás, who is never portrayed as a rube in a capitalistic rat race (though others in the film suggest as much to him). Nicolás’ community cannot understand why the objectively correct answer to his quest—homemade tortillas are a myth, his errand is misguided, and he should explain as much to his boss—can still be the wrong answer to Nicolás and to the culture in which he is trying to prove himself. Authenticity as a concept becomes beside the point, as the conflict of the film shifts from the simple procuring of the tortillas to his internal psychology as he navigates the competing cultural and class expectations that assail him from either side of the two world divide. It is a version of the classic “buying in” versus “selling out” debate familiar to most young people with ambition, but uniquely poignant to Nicolás as an immigrant—how much degradation—cultural and economic—is Nicolás is willing to endure in order to realize his dream of success?

Throughout the film, it feels like Roden and Hartanto paint themselves into a narrative corner, but the resolution of the film is a genuine surprise and riotously pitch-perfect. Nicolás finds his answer, but the film cannot adjudicate the irresolvable tension at its core. The status of the project, a micro-budget film production fueled by the efforts of a generous crew and donated services invites the meta-critique—whether in a restaurant or in film, going above and beyond with gusto, and the ability to produce without excuses is a paramount virtue for the young and hungry. The Dishwasher invites reflection, but the game that is the American Dream is undefeated.