CURRENTLY OFFLINE: Now Playing Trailer—With epic scale, this lavishly produced animation dives into the moral dilemmas that played out behind the scenes of auto racing's largest, and most notorious, tragedy.
READ REVIEW
Next Previous 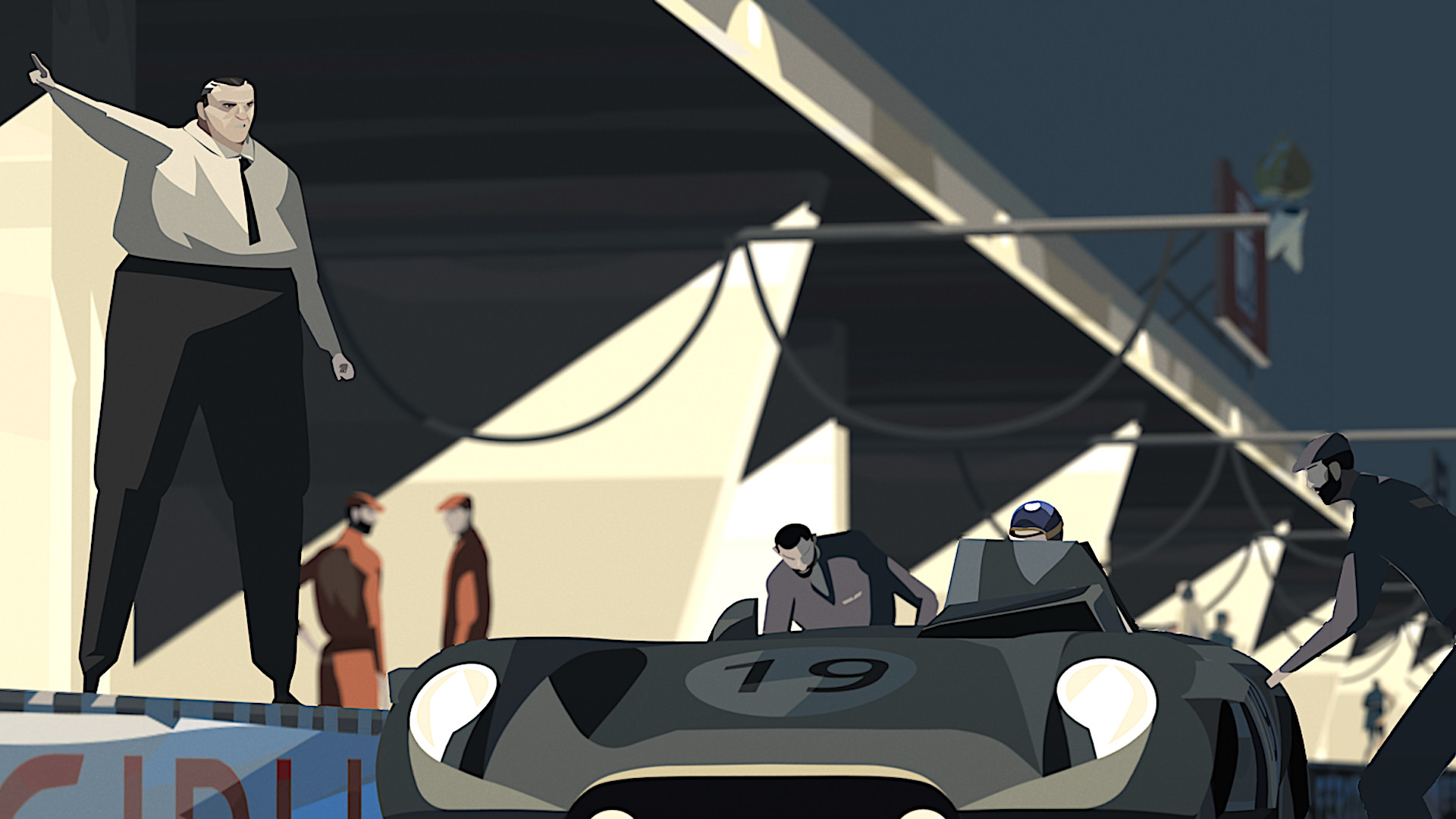 The 24 Hours of Le Mans is having a moment in the wider public consciousness. The nearly 100 year-old event is perhaps the most romantic of automotive sport’s races, and the star-studded Ford v Ferrari is currently in American theaters to triumphantly recount one Le Mans’ most romantic moments—the 1966 race where the stodgy Ford Motor Co. stunned the world in achieving victory over its sexier Italian rival.

Unremarked upon in this glossy film treatment is the tragedy that took place at Le Mans 11 years prior when, in horrifying fashion, a Mercedes-Benz vehicle jumped the track, launching itself into the crowd before disintegrating in flames. Official records are dodgy, but 83 people were estimated to have been killed, and at least 180 more injured. Amidst the carnage, the race shockingly continued to its completion.

Quentin Baillieux’s award-winning animation Le Mans 1955 focuses on this despairing chapter in the race’s history. In some ways the French film is similar to its Hollywood counterpart. Both films are lavish productions that do justice to the scale of the massive event and the visceral thrills of its contest, while both also embed their narrative perspective within a race team—drawing their drama from the clash of personalities and internal conflicts contained within this small group. The similarities end there however. The medium and the format are obviously different, but in disposition they diverge widely. While the Ford v Ferrari airbrushes its history to create a family-friendly film about heroic archetypes overcoming obstacles, Baillieux’s film seeks to probe the interiority of its subjects and plumb the moral conflict and self-justification that could allow competitors to continue the race despite the scores of mangled bodies within simple eyeshot.

“How can we live a moment so joyful in parallel to one so tragic?”

The result is a somber film that belies its gorgeous imagery. Baillieux’s stated purpose is empathy: his awareness of the event began when he found himself captivated by a racing exhibit at the Louvre, including a pristine Jaguar from that 1955 race. Researching its backstory, he was struck by the juxtaposition of two images he discovered—one depicted people in a panic, a blazing inferno behind them, bodies sprawled across the stadium. The other beside it showed delighted drivers celebrating their victory with champagne. As Baillieux relates to us via email, “How could these two images be linked? How can we live a moment so joyful in parallel to one so tragic?” This question sparked the project, fueled by a desire to understand, and to rehabilitate the memory of these competitors. Baillieux again:

“If some of the drivers and the racing world were considered guilty of committing this tragedy, surely their mistake does not make them bad men. Therefore, I strove to see things from the perspective of these so-called guilty men as a sort of devil’s advocate.

I endeavour to explain with empathy how it is possible for the drivers to continue and finish the race despite the tragedy. I wish to restore their humanity and acknowledge the contradictions and the grey areas.”

Baillieux’s aims are admirable, but I always feel a bit uneasy about utilizing film to litigate history. The film does not seek to exonerate, but his sympathetic leanings could easily rub some the wrong way. Our present distance from the year 1955 is surely a benefit in this regard, as attempting such a project on a more recent tragedy would certainly invite criticism. Short films are also, I feel, not very well-equipped to handle nuance and complexity. Constrained as they are by time and a reliance on narrative shorthand in place of character development, more subtle themes often feel forced or flattened. Le Mans 1955  falls prey to this weakness somewhat—the film is undeniably gripping, but alternates a bit between bluntness and narrative muddle.

What can’t be nitpicked is the film’s stunning visual execution. In this, Le Mans 1955 is an unqualified triumph and is, aesthetically, my favorite animation of the year. The French have, for much of the decade, been on the forefront of incorporating 2D styles onto 3D animation, and this is, for me, the peak of that trend. The gorgeous “2D painted” polish of the film’s graphic style is beautifully paired to its CGI, preserving the latter’s flexibility in staging while giving us shot after shot of wonderfully composed and designed imagery. The dynamism of the raceway is a perfect pairing for this approach—its speed and sheer complexity demands the kind dynamic camera movements we associate with live-action, something that has always been difficult for 2D animation to imitate. The particulars of its style aside, it’s also just really rare to see an independent animation of this scale, period. Supported by the famed animation production house Eddy alongside Windy Production, the film looks like a million bucks, and the audacity of the attempt deserves applause in and of itself.

After a stellar festival run that included stops at Clermont-Ferrand, Annecy, and an Oscar-qualifying win at St. Louis International, Le Mans 1955 has come online for a limited time release. Catch it now here on Short of the Week before it goes back offiline!