On a remote island in the future, people are training for an important mission. Take a look at the mechanics of this training facility and the creatures within.
READ REVIEW
Next Previous 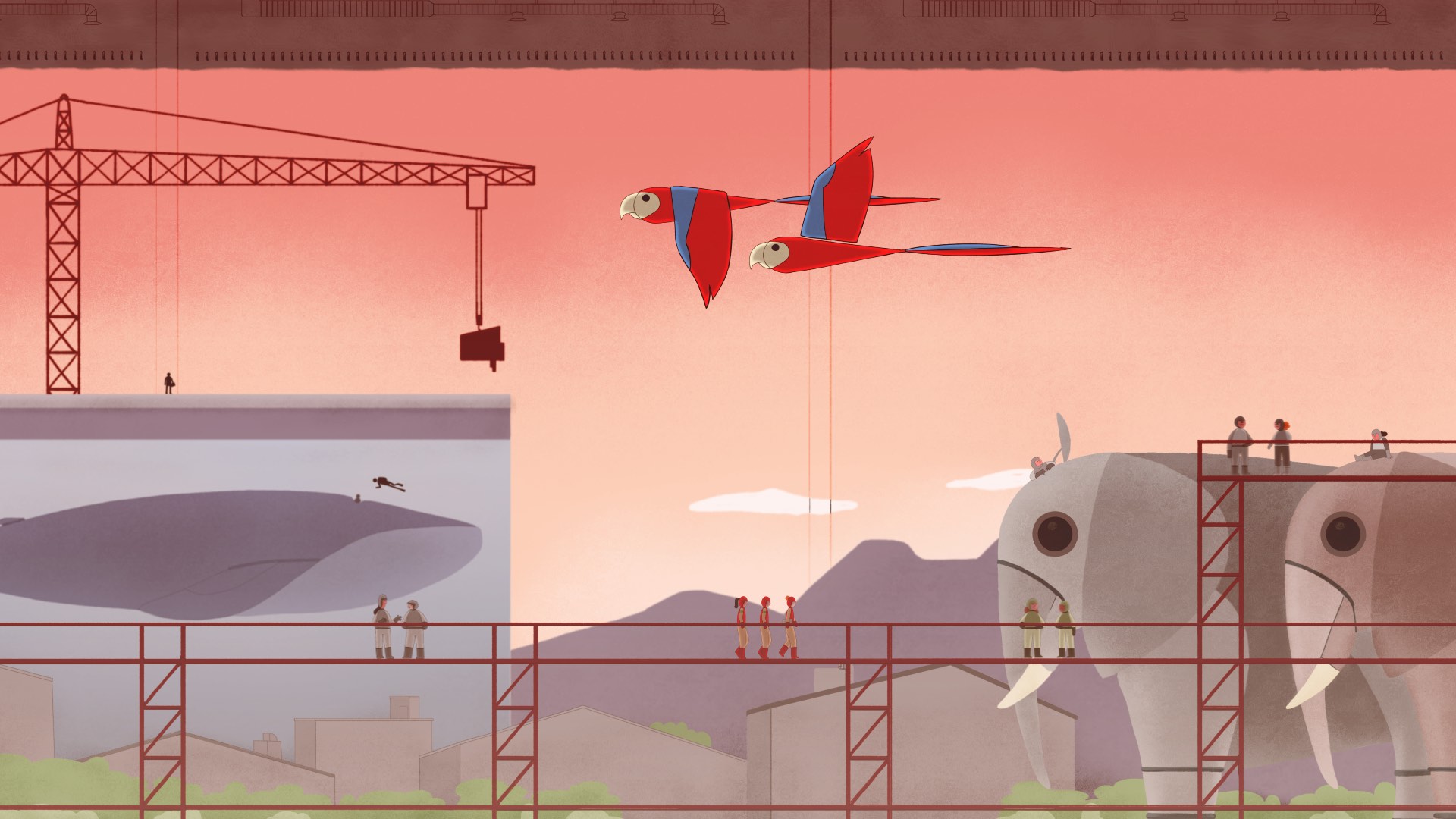 Which is the scariest apocalyptic future? One full of unimaginable horrors or one based on reality? In Louis Morton’s high-concept animated short Floreana, the LA-based animator opts for the latter, painting a vision of a future world ravaged by climate change. Inspired by a “favorite science exhibit” from his childhood, Morton’s narrative sees survivors of this apocalyptic event turn to the animal kingdom as they try to get the Earth back into livable shape.

The concept behind Floreana was motivated by an exhibit at the Powder Valley Nature Center in Kirkwood, where visitors can sticks their heads into different animal heads (deer, fly etc) to experience what is like to see the world through the eyes of different species. Morton has fond memories of the exhibit and they provoked him to form the original concept for his film – “a theme park in which humans can experience the world as different animals by wearing mechanical suits, VR Headsets, etc” – as he was eager to create something that replicated this experience of the animal’s perspective.

“After 3 months of heavy development the idea transformed from a fun theme park to a bleak post apocalyptic climate crisis influenced future world in which people are actually transferring their minds into animals”, Morton explains as we discuss the evolution of his concept. “I ditched the first-person animal vision idea, and instead went with a panoramic side moving camera thing, also influenced by displays at science museums and the classic monkey to human evolution poster.”

Hoping to create something that is both “terrifying” and “exciting” for his viewers, Morton created the design and structure for Floreana during a 3 month residency at the Animation Workshop in Viborg. Opting against storyboarding, he instead “designed several scenes populated by different characters with the idea that they would all be moving while a camera slowly panned through.”

Over the course of a year, Morton brought his film to life by animating at nights and weekends, when not at his full time job in Los Angeles. Describing parts of his production as a “real beast”, all the animation was created in Adobe Animate, while the compositing was completed in After Effects.

Floreana is a film that caused some debate within the editorial team at Short of the Week, with one programmer describing at as a “real think piece”, while another believed it was nothing more than “terrific eye candy”. It’s fair to say it’s not a film that fits easily into a “narrative first” approach to curation and if anything it’s the concept that we’re backing, over the storyline. There’s not a lot of actual story here, but the world building and potential is incredible.

We’d love to see more from the Floreana universe and though Morton is adamant the short should “serve as a complete piece”, he also admits he’d love to develop it into something larger – “either a series of shorts or even an experimental feature”. For now though, he’s working on a new project, a hand-drawn experimental animation set in coal mine, which he promises will get “wild playing with character animation and sound design”.