Gwen, the lead scientist on a secret experiment to teleport humans, encounters a co-worker on a smoke break. As she grapples with the implications of recent discoveries it’s clear that a dire mistake has been made.
READ REVIEW
Next Previous 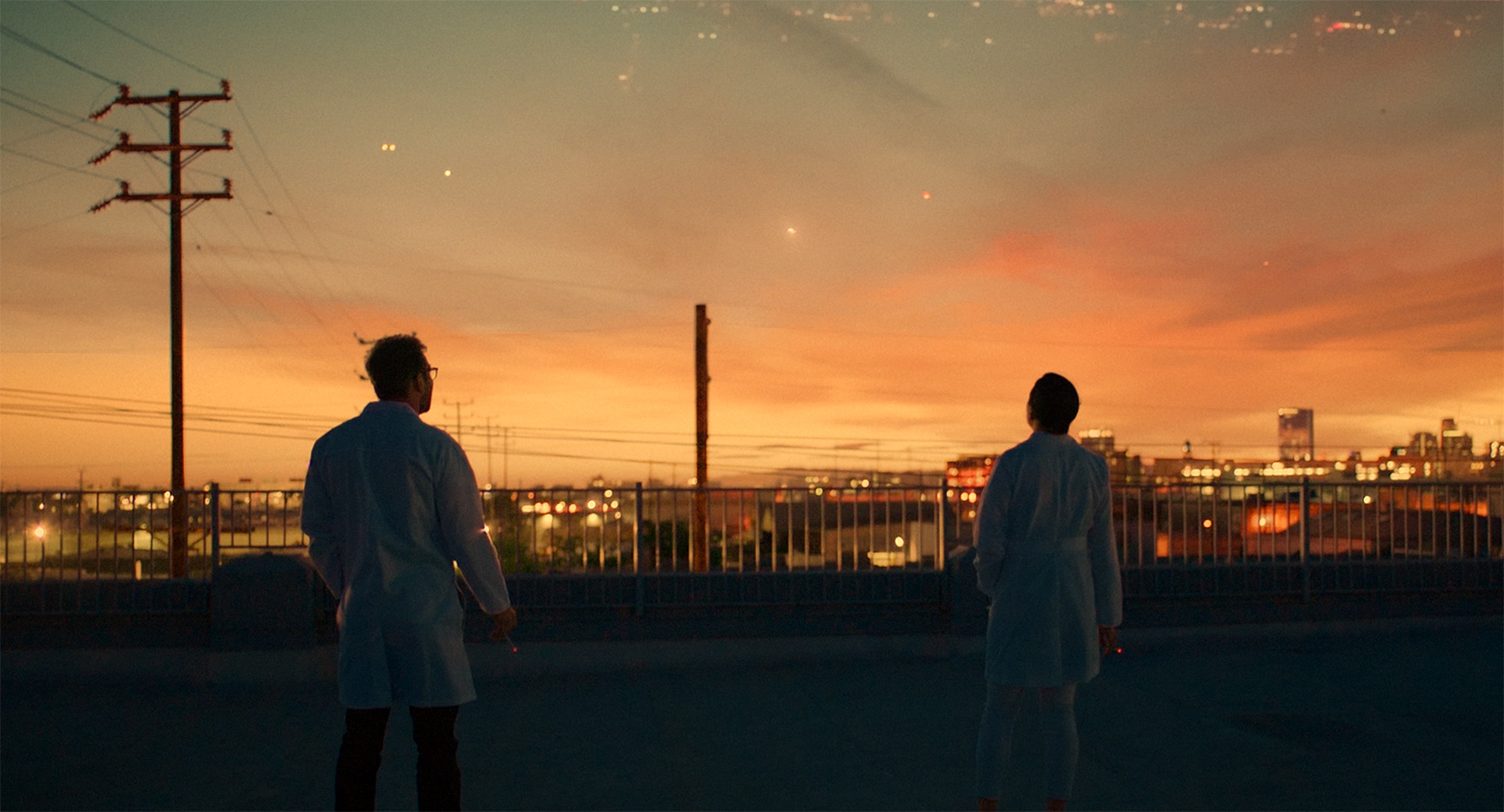 I love the way a one-take film can suck you into its narrative orbit. They’re not easy to make, but they always seem like they are, and when you’re watching something that’s free from the distraction of constant cuts and coverage, it’s a little easier to suspend your disbelief and give yourself over to the story. Liminal is the kind of film that shows us that you don’t need an astronomical budget to create a compelling sci-fi film; sometimes all you need is an intriguing conversation between two talented actors and an idea that seems believable.

Our two leads are Gwen—a haunted biomechanist tasked with secretive research, and Tim—a friendly, optimistic scientist with a less controversial job. They meet on a roof they’ve both gone to in order to get away from everyone else, and over the course of seven minutes, they share cigarettes and a conversation that raises big questions about humanity in short sentences. It’s hard to be more specific without spoiling anything, but they talk about what exactly makes a human being human, and thanks to a pair of convincing performances from actors Anna Campbell and Max Lesser, we’re able to believe—if only for seven minutes—that the kind of Big Discovery that we hear about in this film might be real.

One of the first things I was reminded of when I first watched Liminal was Takeaway Scenes, a series of one-take shorts created by anonymous filmmakers, and as it turns out, this film was partially inspired by those films. As our directors say in a statement, “The point [of Liminal] was to focus on performance and not dwell on the technical. We thought we’d like to try something similar and tailored Liminal to the one shot format. It has since changed and gotten opening and closing scenes (and lots of technical work), but the fundamental seven minute take still focuses on the wonderful performances of Anna and Max and is a reflection of that original idea to work within the Takeaway Scene style.” For the record, the one-take we see in this film is the ninth and final take of the shooting day, captured in the moments before it was too dark to shoot anymore. As anyone who has ever been on a film set knows, it’s difficult to get everything you want during your shooting day, but sometimes the best stuff happens in those last few lucky moments before you run out of time.

Though the film shares a similar style to Takeaway Scenes, it is very much its own thing, mostly because co-directors Collin Davis and Matt Litwiller have introduced elements of the unreal to a type of one-take film that rarely gets the sci-fi treatment. This film’s use of subtle VFX, dreamy cinematography, and an intoxicating blend of sound design and score keeps the film grounded in reality, and though we understand that this takes place in the future, it doesn’t feel so far into the future as to alienate us from the world we know.

Like scientific experiments in general, most sci-fi shorts fail to make their mark on the world. Some of these films are technically gorgeous but tragically vapid, while others have promising concepts but are poorly made. When it comes down to it, a lot of these shorts suffer from the same fatal flaw: they fail to convince us that the world they’ve created is real, and if you’re not convinced that the world you’re seeing is real, how can you care about the people or events that appear on screen? At the end of the day, Liminal succeeds because it suggests the future instead of showing it to us.

Collin and Matt are currently in pre-production on their LOST COAST, their feature debut.