In the dead of night, police officers find a drunk badger by the side of the road. Things only get weirder from there in this delirious prize-winner.
READ REVIEW
Next Previous 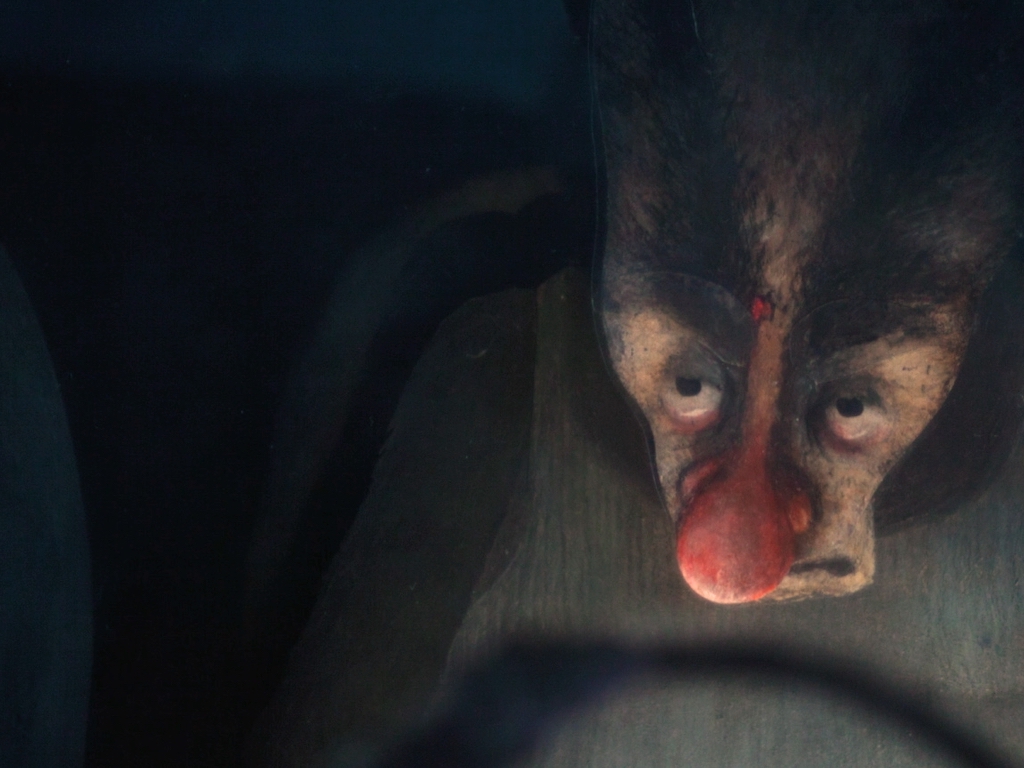 Drunkenness can be at once comic and tragic, and both moods are encompassed in this freaky, freewheeling animated short. Spela Cadez’s Nighthawk is, in the simplest terms, a cautionary tale about the misery of alcoholism. But the boozer in question is a badger, his poison a bunch of rotten pears, his night on the town more of a road trip into nightmarish abstraction.

The film opens on a surreal scene that Cadez and her screenwriter Gregor Zorc lifted from a news report. By the roadside, two policeman encounter a badger inebriated on fermented fruit. The true-story element ends there, as the bleary-eyed mammal commandeers their vehicle and embarks on a bumpy ride down dark country roads.

The rest is a study in minimalism. The badger eats more pears and gets drunker. Like Tom Hardy’s Locke, he growls defensive non-sequiturs at an imaginary passenger: “Think it’s easy for me?” The lights and markings on the road start to blur and dance to the funky music on the radio, recalling the colourful experiments of early animators like Len Lye. Cadez and Zorc are bold enough not to load the film with didactic dialogue and plot turns. Essentially, Nighthawk is a portrait of the bleak, progressive confusion that comes with too much alcohol.

While inspired by the absurd news story, the narrative was was also informed by personal experience. Cadez has spoken candidly about her father’s alcoholism: “There was a moment [when he] was so drunk that he couldn’t stand up anymore. I had this feeling of… ‘I don’t care if he ever stands up on his feet.’” Her badger is no doubt pathetic, but society’s dismissive treatment of drunks comes under fire too, notably in the caustic coda. Cadez’s earlier films, though eccentric, centred on rather sentimental romances; this dark satirical edge is new.

Nighthawk marks an aesthetic turning point, too. Instead of her usual puppets, Cadez worked with a multiplane camera – a setup in which flat, partly transparent images are stacked vertically and filmed top-down, forming a multilayered visual field and a disjointed sense of depth. This technique recalls Russian master Yuri Norstein, and although it’s been superseded by digital technology, some animators still use it for its artisanal feel. Cadez’s DIY approach extends to the choice of materials: coffee was used to create shadows, Vaseline to blur the lights.

Audiences responded well to it. The film picked up a bag of prizes, including the Grand Prix at the prestigious Animafest Zagreb; on the ZippyFrames website, animation mavens voted it the joint-best short of 2016. Meanwhile, Cadez is returning to the multiplane for her next film, which is due to be finished next year. The technique is “always a challenge,” she says, “each project a new research of the medium.” We can’t wait to see where it leads her.