An allegorical depiction of our society - during dinner, "the system" feeds the few who foolishly consume all the resources while the rest survive on scraps. Inevitably the struggle for what remains leads to catastrophic change.
READ REVIEW
Next Previous 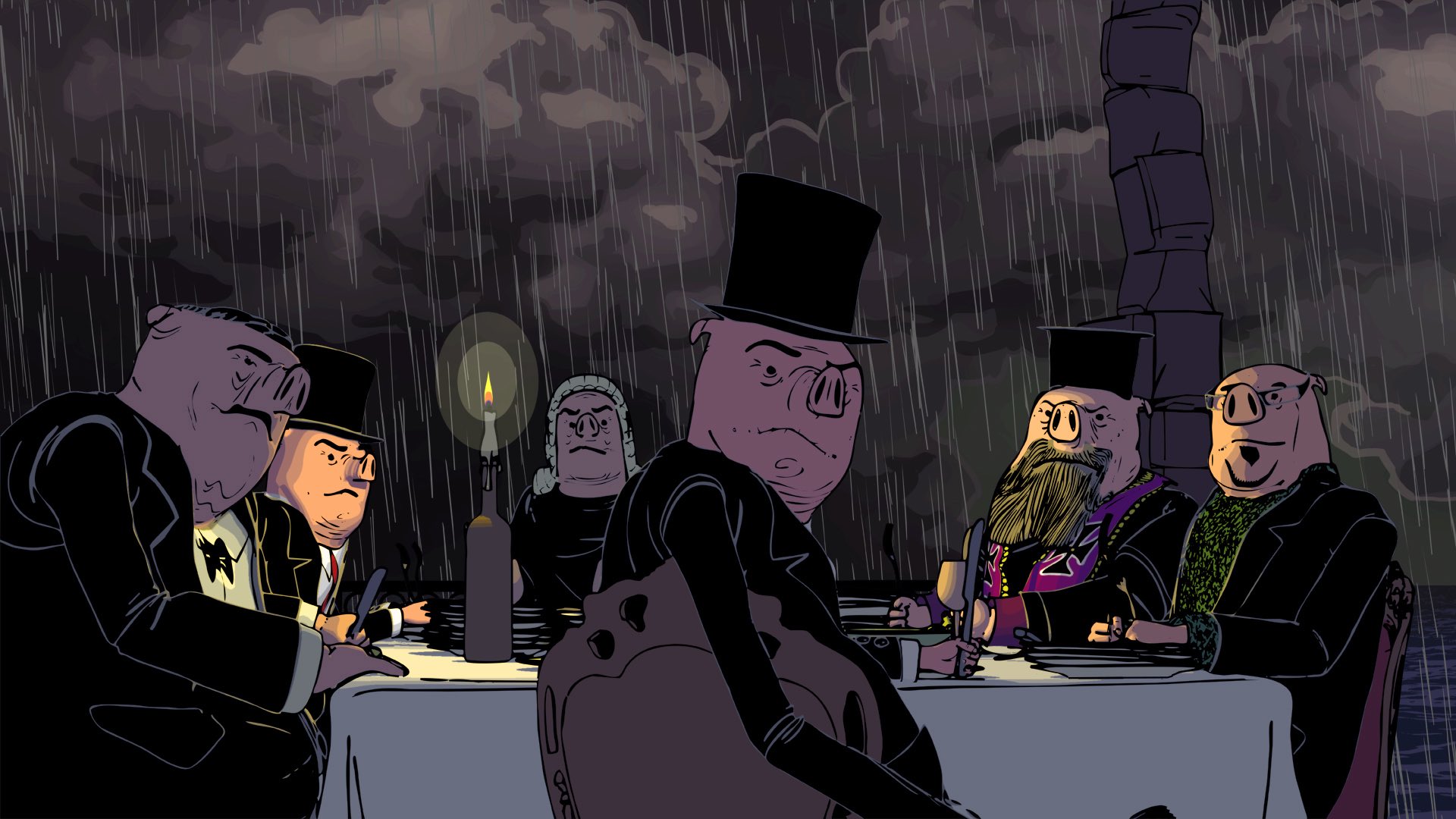 Inspired by the economic crisis in Greece, Nassos Vakalis’ allegorical tale DINNER FOR FEW isn’t interested in pointing fingers, assigning blame or adopting a specific political view. Instead this 10-minute animated film, centred around a group of well-dressed pigs at a dinner table, hopes to open the eyes of its audience to the bigger picture and the cyclical nature of the problem.

With its swine-based central characters key to its storyline, it’s hard to watch DINNER FOR FEW and not be reminded of another allegorical tale featuring porky protagonists – George Orwell’s seminal novel Animal Farm. However, it’s not just the prominence of pigs that the two storylines share in common, with both tales also centring around themes of corruption, leadership and society, it feels like they share a similar message.

Through speaking to many Greeks (my partner is Greek), around the same age as me, the feeling I get is that they blame the state of their country largely on the generation that came before them and the way in which things operated. And though writer/director Vakalis is keen not to attribute specific blame with his short, but instead get viewers to look at society as a whole, this is also the reading I couldn’t help but take from his film.

The pigs in his film all sport the look of a certain age/generation and they’re dressed in the recognisable garb of certain sections of society – law, religion, business. Maybe this was designed more to empower change and specifically motivate the younger generation to be more involved in politics and how their country is run, but it’s also hard not see it and feel like it’s a finger pointed (rightly or wrongly) at a certain generation – especially those in power.

Though the economic crisis in Greece has been somewhat overshadowed by the likes of Trump and Brexit in World news in recent times, it’s hard not watch DINNER FOR FEW and relate to the message of the piece. Again, this comes down to that bigger view Vakalis was key for his audience to take with his film. Hoping they would read his film more as a comment on human nature, than a take on one country’s financial/political position (as I have in this review), it feels like this is a film everyone can take a little something away from, whatever their background.

DINNER FOR FEW is a short that totally consumes you with its narrative, but ignoring the visuals and craft of the piece would feel like a real oversight on my behalf. Featuring a distinct and unusual aesthetic, Vakalis (with the help of Eva Vomhoff) aimed to use 3D animation to create something that felt hand-drawn. The result is certainly not something you’d label as beautiful or particularly appealing, but in many ways it’s an aesthetic that feels perfectly paired to its storyline.